“The big plus of the hybrid event is the digital reach well beyond the trade fair period”MegaGen’s AnyRidge—the ideal solution for any missing teethInterview: Experience Schütz Dental’s complete digital workflow at IDS 2021IDS × Osstem Implant: No matter what, we’ll be there for youtoday at IDS 2021 Show Preview (International)today at IDS 2021 Show Preview (German)Interview: “IDS will light the way for the whole dental industry”Efficiency and versatility—pioneer in graphene nanotechnology in dentistry to exhibit at IDSHASS meets highest demands for aesthetic restorationsDental electric motor company Micro-NX to launch handpiece line-up at IDS 2021
Visit microsite
home / who’s who 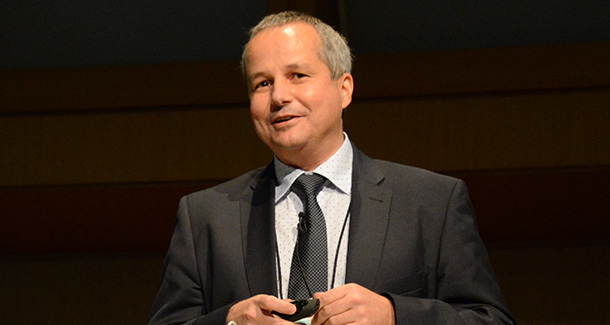 Prof. Bart Van Meerbeek obtained his DDS in 1988 and his PhD in 1993 from KU Leuven, the university of Leuven in Belgium. He continued his research activity abroad for one year at the University of Texas Health Science Center at San Antonio, Texas, in the US and later at the University of Missouri-Kansas City. In 1995, he became an assistant professor at KU Leuven and has been teasching dental biomaterials science since then. In 1998 and 2002, he was promoted respectively to the position of associate professor and professor, and in 2005 to full professor. In August 2020, he was elected as chair of the KU Leuven Department of Oral Health Sciences, serving for four years.

His primary research interest involves studies related to the broad field of adhesive dentistry, including fundamental as well as clinical research regarding dental adhesive technology in particular. Newer research lines deal with dental ceramics, cariogenicity and biocompatibility of dental materials, bioactive materials and pulp-preservation material technology. His research work has been published in more than 400 peer-reviewed journals and has been honoured with awards such as the 1996 triennial Robert Stock Award for best PhD dissertation in biomedical sciences, Albert Joachim Award in 1997, award in Biomedical Sciences of the Research Council of KU Leuven in 1998, IADR Young Research Award in 2000, SmithKline-Beecham Award in 2001, Academy of Operative Dentistry Buonocore Memorial Lecturer in 2003, CED-IADR (Continental European Division of IADR) Robert Frank Lecturer in 2008, 2014 IADR/AADR William J. Gies Award for the best 2014 JDR paper in the Biomaterials & Bioengineering Research category, and the 2015 IADR Wilmer Souder Award (IADR Distinguished Scientist award for Dental Materials). In 2003, he became holder of the Toshio Nakao Chair for Adhesive Dentistry. He was President of the Pan-European Federation of IADR in 2006 and 2007 and is currently serving as Secretary of the Continental European Division of IADR or CED-IADR. In September 2020, he became CED-IADR president. Since 2004, he has been the Editor-in-Chief of the Journal of Adhesive Dentistry.

GENEVA, Switzerland: With less than two months to go until World Oral Health Day (WOHD) on 20 March, FDI World Dental Federation has some tips and tricks for you to be #MouthProud, have fun and celebrate safely.

BUFFALO, N.Y., U.S.: A student at the University at Buffalo (UB) School of Dental Medicine has developed a new initiative that aims to remove barriers to studying dentistry for students of color. The free program, named Destination Dental School, is open to eligible undergraduate students from all over the U.S. and will provide them with a number of mentoring, training and sponsorship opportunities.

Interview: “SugarByHalf’s mission is for people to live better and healthier lives”

In recent years, numerous studies have established conclusively that there is a link between oral health and systemic disease. More than 50% of Australian children have experienced dental caries by 6 years of age, and at least 1.2 million Australians have diabetes; therefore, the benefit of education in this area is clear. That is where SugarByHalf comes in, according to the charity’s CEO, Tania Sincock. She recently spoke with Dental Tribune International about SugarByHalf’s goals and discussed her own experiences with reducing her sugar intake.

TEL AVIV, Israel: Dental clinics in Israel are operating as usual this week, despite a government-imposed lockdown that has been implemented to curb the spread of SARS-CoV-2. Dental Tribune International (DTI) spoke with an Israeli dentist, who commented that the strict health protocols that are in place within dentistry justify the continued provision of elective care.