E-cigarette use among youth in the US: Recent developments

E-cigarette use among youth in the US: Recent developments

Home/Articles
Despite their negative effects on oral and overall health, e-cigarettes continue to appeal to US youth. (Image: Crystal Eye Studio/Shutterstock)

LEIPZIG, Germany: The history of smoking stretches back to 5,000 bc, whereas cigarettes were first introduced in the US in the early nineteenth century. Since then, cigarettes have come in many brands and flavours. Once touted to have health benefits, smoking has long been shown to be detrimental to oral and overall health, yet although there is growing evidence of its adverse effects, millions of people in the US and around the globe continue to indulge in smoking products. These include e-cigarettes, which have been referred to as “the new face of nicotine delivery and addiction” but have been marketed as a safer alternative to conventional smoking.

According to the US Centers for Disease Control and Prevention (CDC), e-cigarettes are the most commonly used tobacco product among US youth. In a 2021 survey, 2.06 million US middle and high school students had vaped in the past 30 days, including 320,000 middle school students and 1.72 million high school students. As reported by the New York Times, teenage vaping rates have declined during the COVID-19 pandemic. Nevertheless, the numbers are deeply alarming, and there might be an uptick in the near future.

The reasons for smoking or vaping are plentiful. For one, it might provide a temporary sense of relaxation and help build and maintain social relationships. Attractive as it may seem however, smoking has been linked to deepened periodontal pockets, tooth loss, pulpitis and even oral cancer. Research on the impact of vaping on oral health is still scant, but scientists have already gathered evidence on its adverse pulmonary health effects and a unique connection to periodontal disease.

The US Food and Drug Administration (FDA) in regulating e-cigarettes requires manufacturers to undergo robust scientific evaluation of their products to ensure compliance with public health standards. On 23 June, the regulatory body ordered JUUL Labs, a US e-cigarette company that holds the largest share of the market in the country, to stop selling its vaping products owing to insufficient evidence regarding their toxicological profile.

“The FDA is tasked with ensuring that tobacco products sold in this country meet the standard set by the law, but the responsibility to demonstrate that a product meets those standards ultimately falls on the shoulders of the company,” said Michele Mital, acting director of the FDA’s Center for Tobacco Products. “As with all manufacturers, JUUL had the opportunity to provide evidence demonstrating that the marketing of their products meets these standards. However, the company did not provide that evidence and instead left us with significant questions,” she noted.

In order to keep their products on the market, e-cigarette companies must provide evidence that their products benefit public health by helping adult smokers who use them to quit or reduce smoking or by not causing teen addiction, for example. JUUL products have reportedly targeted underage users and played a significant role in the rise in youth vaping in the US.

Opposing the claim, the company has previously stated that its products have, in fact, been instrumental in tobacco harm reduction and have helped adults to move away from combustible cigarettes.

JUUL has officially appealed the FDA’s decision to halt the marketing and sales of its products. As a result, the federal court temporarily put the government’s order on hold. 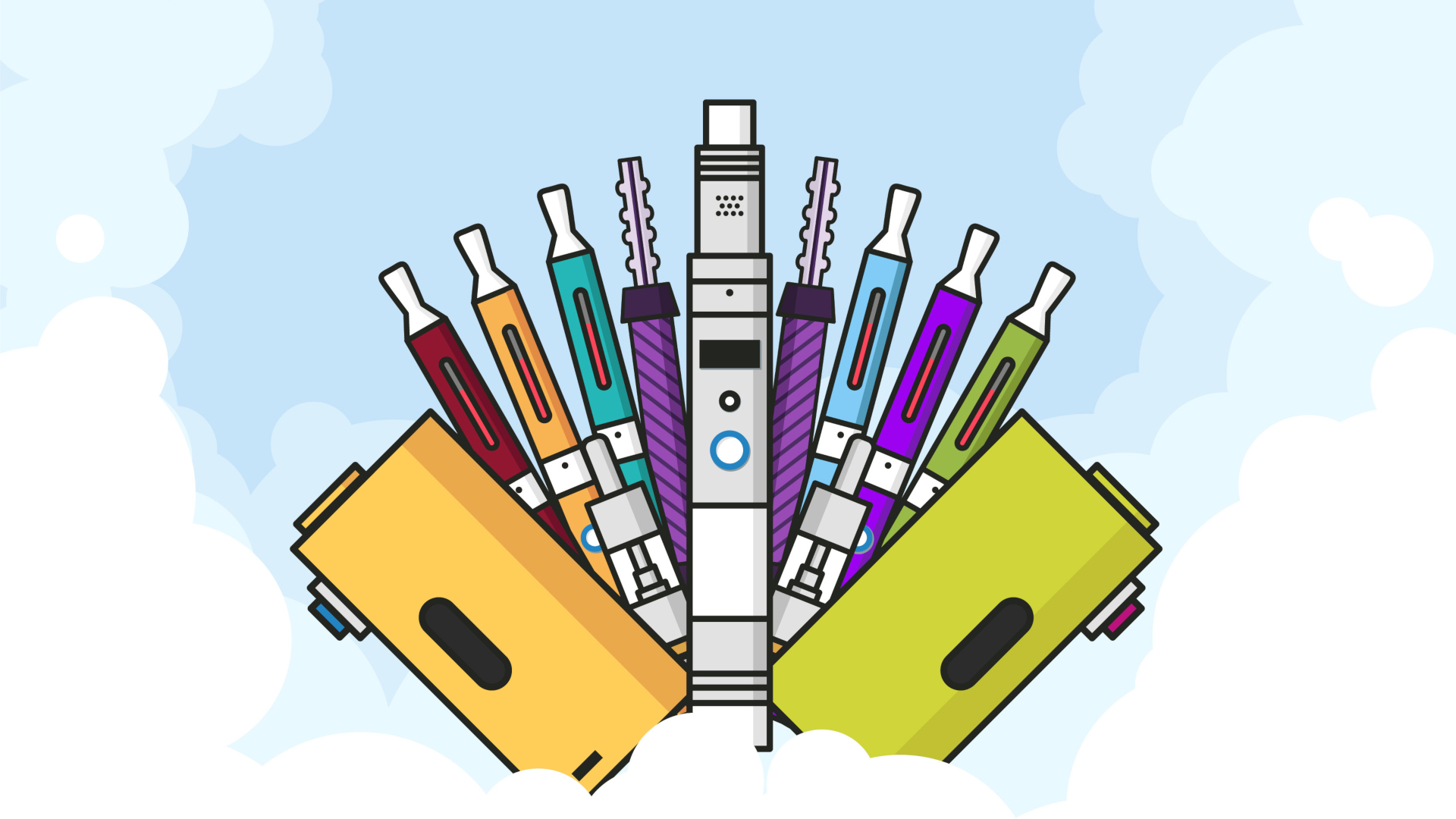 E-cigarettes are appealing to young people in a number of ways, one of which is their aesthetics. (Image: FlyIntoSpace/Shutterstock)

Vaping as a smoking cessation method

Despite the fact that e-cigarettes often contain equal amounts of nicotine, vaping is often advertised as a smoking cessation method. However, according to health and medical information provider the Better Health Channel, vaping may, in fact, make it more difficult to quit smoking completely and may increase the risk of suffering from diseases associated with tobacco use.

Although evidence on the effects of e-cigarette vaping compared with traditional smoking on oral health is still lacking, there is compelling proof that it can damage teeth, the mouth and gingiva. For example, researchers have shown that the oral microbiome of e-cigarette users without periodontal disease closely resembled the microbiome of people with periodontitis. A study published in iScience found that 43% of people using e-cigarettes had periodontal disease and oral infections, and a study published in Frontiers in Oral Health demonstrated that e-cigarette aerosol may cause clinical attachment loss.

According to FDI World Dental Federation, e-cigarette aerosols can cause cytotoxicity of oral keratinocytes, and the concentrations of metals such as nickel, lead and chromium, which affect the gingival epithelium, periodontal ligament and oral mucosa, are greater in e-cigarettes than in conventional cigarettes. Finally, the toxic material cadmium found in e-cigarettes has the potential to disturb alveolar bone remodelling in periodontal disease, possibly leading to bone resorption.

Plans for reducing the addictiveness of tobacco products

According to CDC, more than 480,000 people in the US die every year from a smoking-attributed disease, including more than 41,000 deaths resulting from second-hand smoke exposure. As reported by a recent study conducted by researchers at the University of California, San Francisco School of Nursing in the US, the use of e-cigarettes costs the country US$15 billion (€14.3 billion) annually in healthcare expenditure, amounting to over US$2,000 (€1,900) per person a year. In light of the findings, the study authors called for continuing efforts to control e-cigarette use among youth to reduce associated illness and healthcare costs.

Additionally, to reduce youth tobacco use, addiction and death, the FDA has recently shared its plans to develop a tobacco product standard which would help establish a maximum nicotine level to reduce the addictiveness of cigarettes and certain other combusted tobacco products.

“The US Surgeon General has reported that 87% of adult smokers start smoking before age 18, and about two-thirds of adult daily smokers began smoking daily by 18 years of age. Lowering nicotine levels to minimally addictive or non-addictive levels would decrease the likelihood that future generations of young people become addicted to cigarettes and help more currently addicted smokers to quit,” Dr Califf concluded.

NEW YORK, US: Smoking tobacco has long been known to be detrimental to oral health, but the risks of newer simulations of smoking such as vaping are less...

BALTIMORE, U.S: Scientists investigating the potential health effects of vaping on the human pulmonary system have reported that inhaling vapor from ...

CHICAGO, U.S.: The American Dental Association (ADA) in December adopted an interim policy that calls for a total ban on all vaping products that are not ...

CLEVELAND, U.S: The controversy over the safety of electronic cigarettes persists, and some people regard vaping as a public health epidemic. Experts have ...

SILVER SPRING, Md., U.S.: It was almost a year ago that the U.S. Food and Drug Administration (FDA) initiated “The Real Cost” Youth E-Cigarette ...

BOSTON, U.S.: Electronic cigarettes are becoming increasingly popular. Although they are viewed by some as a safer alternative to smoking, their effects are...

SAN FRANCISCO, U.S.: Smoking remains a leading cause of oral cancer, and the tobacco product range is evolving with increasing use of non-cigarette tobacco ...