Home/Articles
The outbreak of a deadly lung illness and high incidence of youth vaping were cited as factors behind the American Dental Association’s new interim stance on vaping: ban all non-prescription products but advocate for further research. (Image: Aliaksandr Barouski/Shutterstock)

CHICAGO, U.S.: The American Dental Association (ADA) in December adopted an interim policy that calls for a total ban on all vaping products that are not approved for tobacco cessation purposes by the U.S. Food and Drug Administration (FDA). Following the lead of the American Medical Association (AMA), the ADA has thrown its weight behind a de facto banning of the controversial product category because the FDA has not approved any vaping devices as prescription tobacco cessation medicines and is unlikely to do so in the near future.

The policy states that the ADA urgently advocates for federal and state level legal action to ban the sale and distribution of vaping products, except for those that the FDA has approved for smoking cessation purposes and that are available to consumers through prescription only. The policy states that the association will support further research into the effectiveness of vaping products for tobacco cessation and the effects on the oral cavity of using vaping devices.

A statement released by the ADA said that its stance is a call to action to protect the health of consumers: “While the long-term oral health effects of vaping are under scientific review, as health professionals we must be prudent in protecting consumers from potentially harmful products,” explained ADA President Dr. Chad Gehani. “We will continue to advocate for additional research, but we must protect the health of our patients first and foremost. A ban such as this would ensure patient safety while allowing us to explore the impact of vaping products on oral health.”

The ADA’s stance mirrors that of the AMA, which called for a total ban on vaping products in November. Both associations cited last year’s national incidence of the deadly lung disease EVALI (electronic cigarette or vaping product use-associated lung injury) that has led to over 2,000 people being hospitalized and 55 deaths, and high levels of vaping among youth, as grounds for a total ban on products that do not meet FDA approval as cessation tools. In December, the Centers for Disease Control and Prevention (CDC) confirmed that the disease is linked to the inhalation of vitamin E acetates found in certain vapor products containing the chemical compound tetrahydrocannabinol (THC), particularly counterfeit products, and not over-the-counter consumer vaping products. The FDA and CDC did not call for a ban on the category, but recommended that consumers not use THC-containing products or products containing vitamin E acetate. The CDC said that consumers should consider refraining from using vapor products, but should not give up vaping and return to using cigarettes.

The ADA’s stance also resembles that taken by the World Health Organization (WHO), which has called on countries to ban or limit the availability of vapor products. Critics of WHO’s position, such as Clive Bates, who founded the U.K.’s leading anti-tobacco group Action on Smoking and Health, and was one of the architects of WHO’s international smoking control treaty, assert that tobacco control, which fundamentally aims to reduce the harm caused by tobacco use, must include harm reduction strategies such as the provision of lower-risk alternatives to those affected by nicotine addiction.

Mark Anton, executive director of Smoke-Free Alternatives Trade Association (SFATA), based in Washington, D.C., told Dental Tribune International (DTI) that “it is better to seek the benefits new technology provides while determining the risks associated with it,” rather than calling for an outright ban.

“We hope the action taken by the ADA is not in response to the recent EVALI reports. The CDC and FDA have already determined that this outbreak was the cause of illegal products sold on the black market and containing vitamin E acetate. Banning vaping would not protect their patients from this type of product, as it is sold illegally.”

Anton also stated that the ADA’s position appeared to be in conflict with the association’s stated goals: “Dr. Gehani said that the ADA must be prudent in protecting consumers from potentially harmful products, but he failed to ask for a ban on combustible cigarettes. These statements confuse the smoker about the relative harms that vaping may or may not possess. Public Health England has stated that vaping is 95% safer than smoking and that its scientists and health professionals are pretty confident of this fact.”

The ADA stopped short of telling DTI that it would advocate for U.S. dentists to dissuade patients from switching from cigarettes to a vaping device. “The ADA has long opposed the use of any tobacco, including nicotine-containing e-cigarettes, and encourages people who use any type of tobacco product to quit—the FDA has approved several cessation methods to help people quit. This stance is consistent with that of several major health organizations, including the AMA and the CDC, which notes that all tobacco products, including e-cigarettes, carry risk,” it said. The association added that “preliminary research on the effectiveness of vaping products for tobacco cessation is extremely limited, and mixed results suggest concerns around dual usage. Ultimately, the concern of the ADA is with the oral and overall health of our patients. More research is needed on vaping’s impact on oral health.” 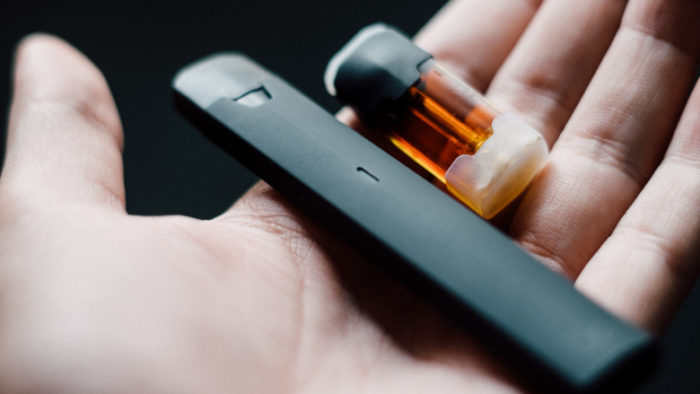 Under pressure to address what has been called a teen vaping epidemic, the Trump administration has banned most flavoured e-cigarette cartridges but has not mentioned the possibility of a blanket ban on vaping devices. (Image: Grungelfz/Shutterstock)

The U.S. is the largest market for vapor products, and there is no indication that the FDA would consider banning them outright. But President Donald Trump has partly followed through on what he previously announced as “very, very strong” action to combat the use of vapor products among the youth. A nationwide ban on certain flavored e-cigarette cartridges was announced on Jan. 2 and will take effect in February. In 2018, more than 3.6 million young people in the U.S. used e-cigarettes—one in every five high school students and one in every 20 middle school students.

Less harmful but not approved for cessation

The health body—like health bodies and regulators in the U.K. and New Zealand—has, however, leaned toward tobacco harm reduction strategies by creating regulatory pathways through which manufacturers can apply to the FDA to have their vaping and other reduced-risk tobacco products marketed to consumers as modified-risk tobacco products (MRTPs). This means that products could be sold with modified health warnings stating that the risk of using the product could be lower than that of using other tobacco products. Any product given the MRTP designation would still not be a prescription-only medication for tobacco cessation, and the costs and other resources involved in pursuing MRTP designation are prohibitive to all but the largest industry players.

The first MRTP orders—eight in total—were given last year to varieties of the Swedish oral tobacco product snus, sold in the U.S. under the General brand by the multinational tobacco company Swedish Match. The FDA is expected to pass rulings in 2020 on MRTP applications submitted by 22nd Century (a plant biotechnology company based in the U.S. that has developed ultra-low nicotine cigarettes) and by Philip Morris USA, which has asked the agency to recognize the IQOS tobacco heating system as an MRTP. The IQOS system, which has captured over 17% of the entire tobacco market in Japan, was launched in the U.S. in May after it was granted premarket approval by the FDA. (IQOS stands for “I quit original smoking.”)

Philip Morris USA, the largest cigarette maker in the country, submitted over one million pages of scientific and other documents to support its May 2017 MRTP application for IQOS. This figure indicates the level of resources involved.

The ADA told DTI that its policy applies to “all e-cigarette and vaping products, with the exception of those approved by the FDA for tobacco cessation purposes and made available by prescription only” and does not make distinctions between sub-categories of vapor products.

WHITE OAK, Md., U.S.: The U.S. Food and Drug Administration (FDA) has updated its guidance for the use of dental amalgam in tooth restorations. The agency ...

SILVER SPRING, Md., U.S.: It was almost a year ago that the U.S. Food and Drug Administration (FDA) initiated “The Real Cost” Youth E-Cigarette ...

BRUSSELS, Belgium: The European Parliament has voted to implement two new regulations concerning medical devices with the aim of improving safety in ...

Today’s retailers certainly will confirm that when the economy takes a turn for the worse, consumer focus shifts from luxury to necessity. Moreover, ...

BALTIMORE, U.S: Scientists investigating the potential health effects of vaping on the human pulmonary system have reported that inhaling vapor from ...

SAN FRANCISCO, U.S.: Smoking remains a leading cause of oral cancer, and the tobacco product range is evolving with increasing use of non-cigarette tobacco ...

NEW YORK, U.S.: Recent papers on opioids and their use within the dental industry have drawn increased attention. In response to research related to opioid ...

CHICAGO, U.S.: Opioid addiction may well be one of the most pressing addiction-related issues facing the global community to date. In a move to combat this,...

SYDNEY, Australia: To encourage the improvement of the oral and general health of the public is one of the Australian Dental Association’s (ADA’s) three...

SYDNEY, Australia: The Australian Dental Association (ADA) has recently published an article in which it discusses the best practices for recycling dental ...

Different is Better - A New Way to Administer Dental Anesthesia