Root canal decontamination and adequate sealing play an important role in endodontic success. However, the obturation process represents a challenge to the clinician owing to the complex anatomy and irregularities of the root canal system, making selection of the obturation material a key step during treatment.1 Calcium silicate-based endodontic materials are ceramic compounds that present good sealing properties owing to their similarity to human hydroxyapatite.2 One of their great advantages is excellent biocompatibility, which prevents rejection by the surrounding tissue, as it contains calcium phosphate, thereby improving the biochemical properties, providing a crystalline structure similar to the bone and dentine apatite.3 The calcium silicate-based materials include in their composition alumina, zirconia, bioactive glass, glassceramics, hydroxyapatite and resorbable calcium phosphates.4

Mineral trioxide aggregate (MTA), one of the most successful bioactive materials, was developed in the 1990s at Loma Linda University in the US by Dr Mahmoud Torabinejad. Over the years, MTA has demonstrated excellent sealing properties, bioactivity, biocompatibility and antibacterial effects owing to its ability to increase the pH by the release of hydroxyl ions.5 The above-mentioned characteristics are shared among the different types of calcium silicate-based materials. These materials can be found in several consistencies and commercial presentations, and the choice of material will rely on the clinical scenario. Their applications have been indicated for vital pulp therapy, filling of bone defects, root canal obturation, retro-filling in periapical surgery, perforation repair, regenerative endodontics and repair of resorptive defects.6

The outcome of exposed dental pulp if left untreated will be irreversible pulpitis followed by pulp necrosis.7 Therefore, if the clinician wishes to avoid pulpectomy, vital pulp therapy might be a good choice, especially in young permanent teeth.8 Current bioceramics, mainly in putty consistency, are used for these purposes, owing to their ability to bond with dentine through the formation of a hydroxyapatite layer on the surface and their capacity to stimulate cell recruitment and differentiation at the level of the pulp exposure.9 Additionally, when compared with MTA, they show similar antibacterial properties against the main cariogenic bacteria, Streptococcus mutans and lactobacilli.10 They also show good biocompatibility and can induce the formation of reparative dentinal bridges.

During an urgent appointment, a 35-year-old male patient reported sharp and short-lasting pain in tooth #15 in response to cold stimuli. The established diagnosis was reversible pulpitis and normal periapical tissue. During the removal of the old amalgam restoration, pulp exposure of approximately 3 mm in diameter was created at the level of the buccal pulp horn (Fig. 1a–g). As there was no profuse bleeding and the pulp diagnosis was reversible pulpitis, it was decided to proceed with a direct pulp capping procedure. 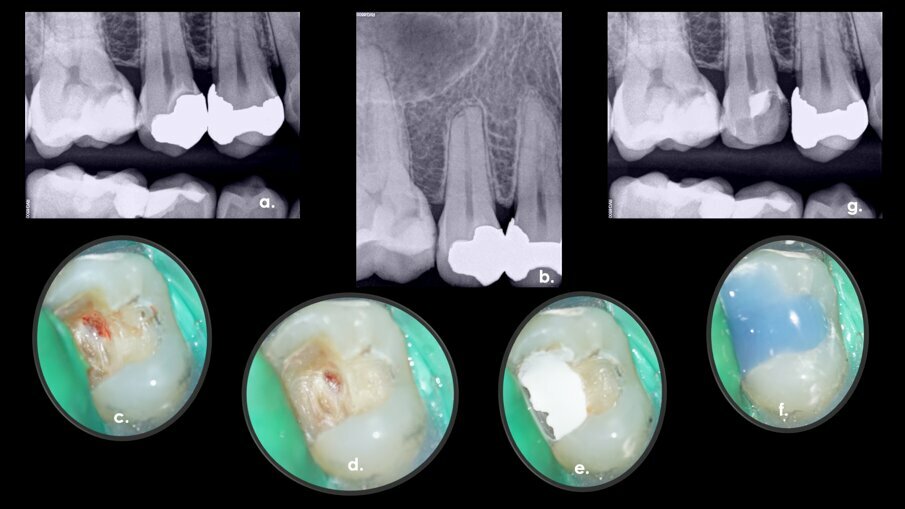 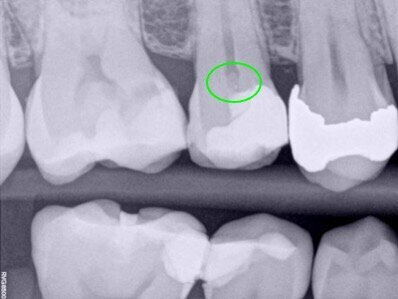 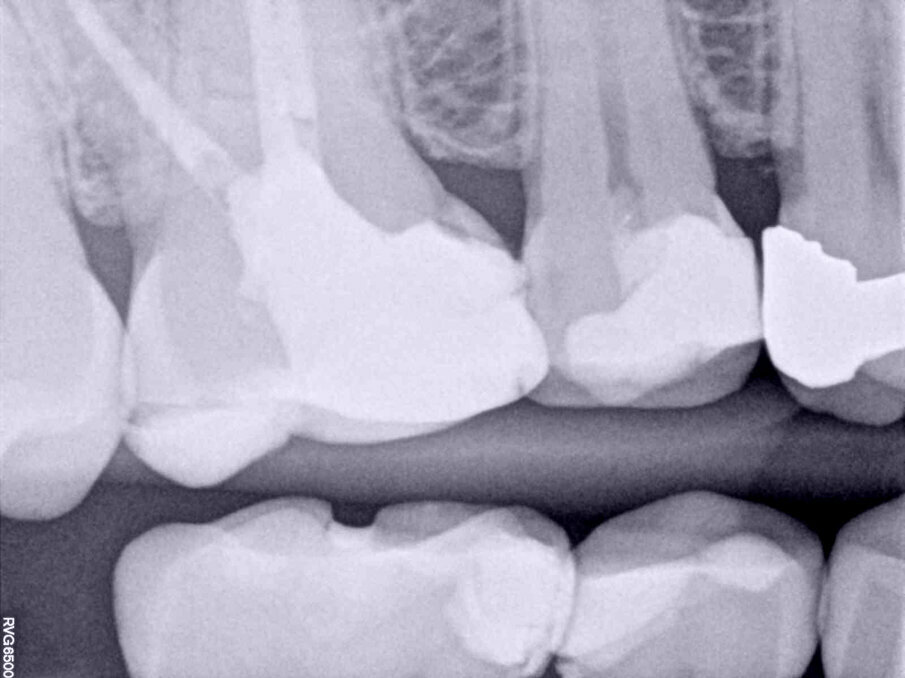 After disinfection of the cavity using 2.5% sodium hypochlorite, a high-consistency calcium silicate-based material (CeraPutty, Meta Biomed) was used for direct pulp capping. At the end of the first appointment, a non-radiopaque temporary restoration (NexTemp LC, Meta Biomed) was placed with the objective of confirming by radiograph appropriate placement of the direct pulp capping material. A direct adhesive restoration was placed during the second appointment using composite (Ezfil, Meta Biomed).

The patient was asymptomatic after the treatment and responded normally to sensitivity tests during the follow-up sessions. A thick dentinal bridge was observed radiographically at the six-month follow-up appointment (Fig. 2). The restoration was well adapted at the three-year follow-up (Fig. 3).

It is crucial to obtain a 3D seal at the time of filling the root canal system. It is difficult to achieve this goal when performing conventional obturation techniques that involve gutta-percha and eugenol-based cements owing to the lack of dentinal adhesion to the canal walls and their incapacity to replicate the root canal system anatomy. The current bioactive calcium silicate-based materials can perform well in this scenario owing to their physico-chemical properties.11 These types of sealers are mainly composed of calcium silicates, zirconia, tantalum oxide, calcium phosphate and fillers.12 They are recommended for use with a single-cone technique, usually called the hydraulic compaction technique, which simplifies the filling process without compromising the outcome.13 In addition to their sealing abilities, their potential to provide a bioactive surface with stimulation of hard-tissue formation and good antibacterial properties make them a great option as a filler material in conventional root canal therapy.14 The following video shows some of the current clinical techniques for application of these sealers.

In both cases presented, the root canal therapy was necessary due to an irreversible pulpitis process affecting the respective teeth (Figs. 4a–5b). Both were approached minimally invasively, starting from the endodontic access cavity preparation and finishing with the post endodontic core build-up. 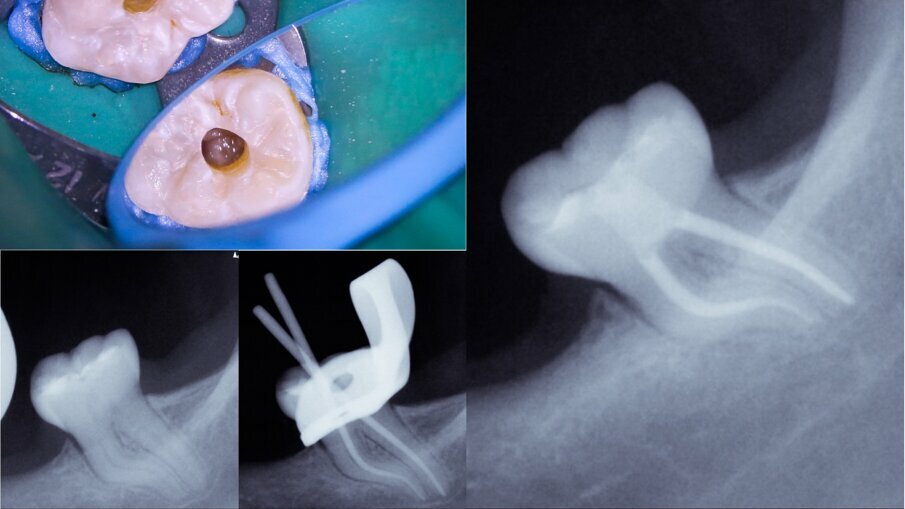 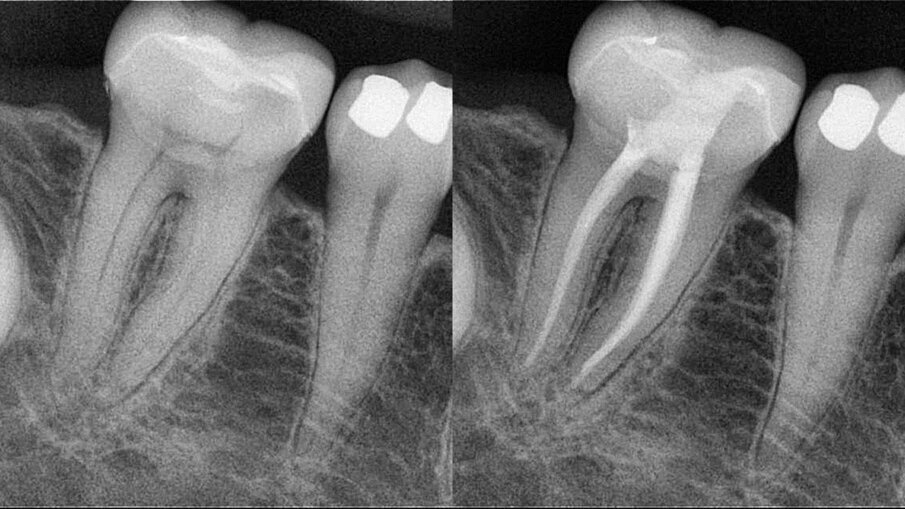 One of the most challenging situations when working through conservative openings is the root canal obturation step. The lack of straight line access, compromised visibility and a reduced opening to properly clean the pulp chamber are factors to take into consideration.15 The physical properties of calcium silicate-based endodontic sealers allow clinicians to overcome those challenging aspects. The relatively easy obturation technique, flowability and easy process of cleaning the pulp chamber provide the necessary means for proceeding with the endodontic therapy as conservatively as possible without compromising the prognosis. In the clinical cases presented, the Aurum Blue system (Meta Biomed) was used for the root canal shaping and the calcium silicate-based endodontic sealer CeraSeal (Meta Biomed) was used, applied with the cold hydraulic compaction technique (see video below).

Iatrogenic root perforations and resorptive defects are undesirable events that result in communication between the root canal system and the periodontium, causing a longstanding inflammatory response and the potential loss of alveolar bone. The role of calcium silicate-based materials in this scenario has been well defined since MTA was introduced, proving the ability to seal the perforation site and to promote tissue regeneration.16 Some of the current bioactive materials developed as premixed pastes and in putty consistency have been released to be used as an alternative to MTA. Faster setting, superior handling properties and similar biocompatibility to MTA are some of their advantages.17 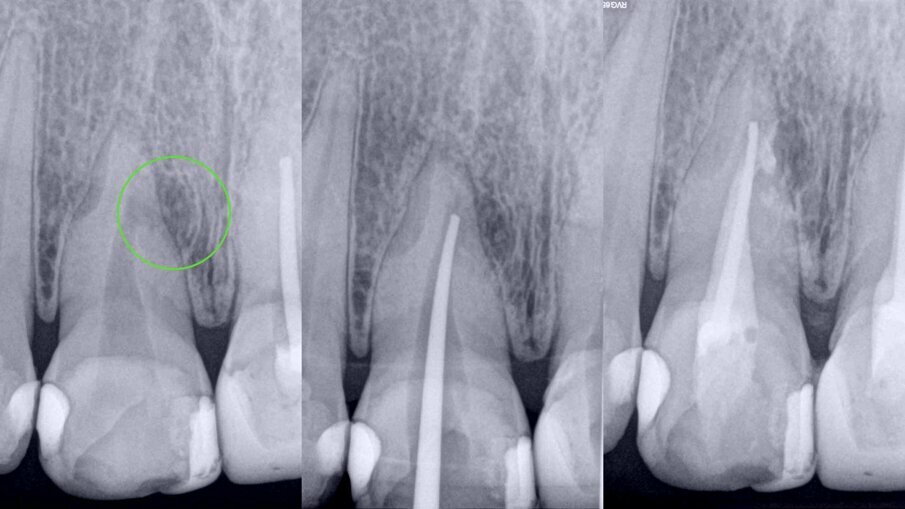 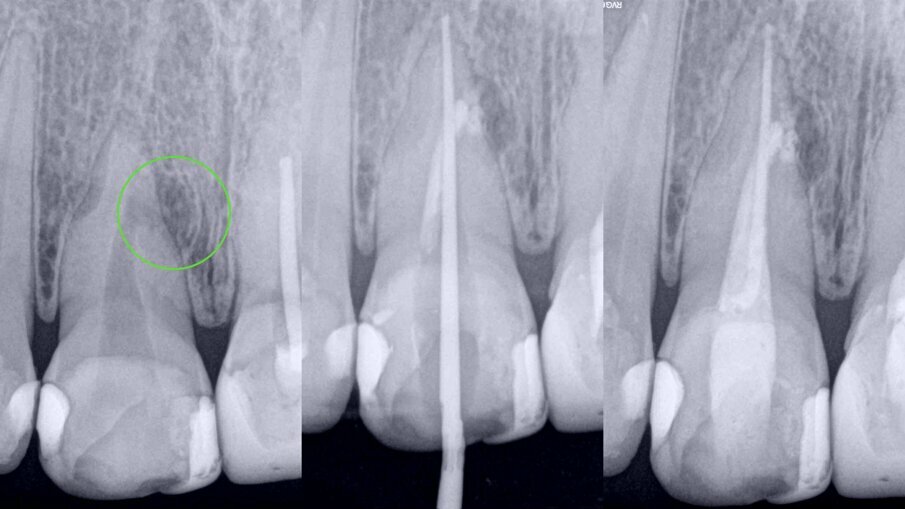 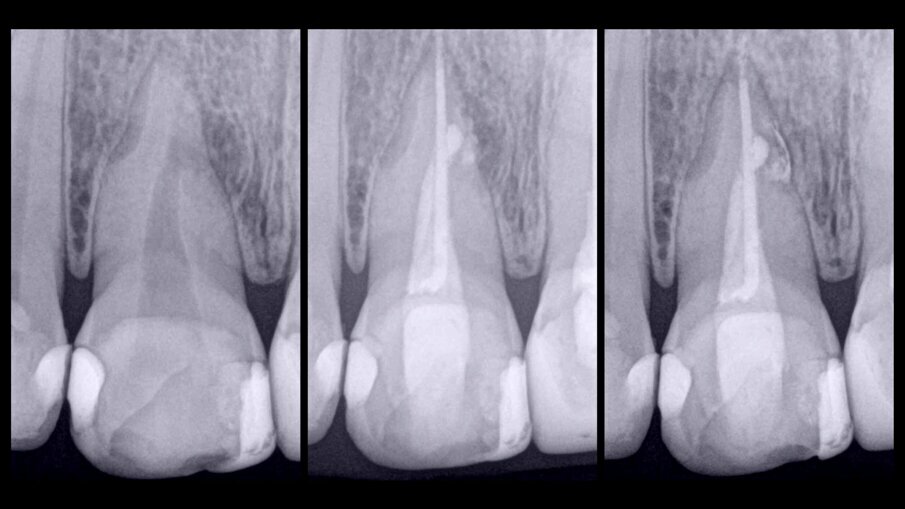 During the first appointment for root canal therapy, it was not possible to reach the complete length of the root canal, because the files tended to go inside of the mesial resorption. It was decided to seal the resorptive defect (Fig. 6a–c) using CeraSeal sonically activated using the EQ-S device (Meta Biomed; see video below).

At the second appointment, the material placed at the resorption was completely hard. That hard barrier allowed the file to pass through the entire length of the physiological root canal. The root canal therapy was finished using CeraSeal as the endodontic sealer (Fig. 7a–c). The three-year follow-up radiograph showed complete healing of the lateral radicular radiolucent area (Fig. 8a–c).

An ideal root end filling material needs to possess several characteristics, such as good biocompatibility, excellent sealing ability, bactericidal or at least bacteriostatic, and capacity to stimulate periapical tissue healing.18 The gold standard material for root end filling in periapical surgery has been MTA for several years, although it presents some manipulation challenges to the clinician. Consequently, premixed bioceramic materials in the form of putty or paste have been developed that present similar properties to those of MTA, but with better handling properties.19

Tooth #21 was extracted, and a bone grafting material (DM Bone, Meta Biomed) was placed in the area to prepare the site for receiving an implant in the future (Fig. 10). Four weeks after the extraction, periapical surgery was performed on tooth #11, and the minimum amount of root was resected in order to avoid compromising the crown–root ratio. The retro-cavity was prepared using ultrasonic tips (Fig. 11), and CeraPutty was used to retro-obturate the root (Figs. 12 & 13). The sutures were removed five days after surgery (Fig. 14a–c). The four-month follow-up radiograph showed the process of healing in both treated areas (Fig. 15). 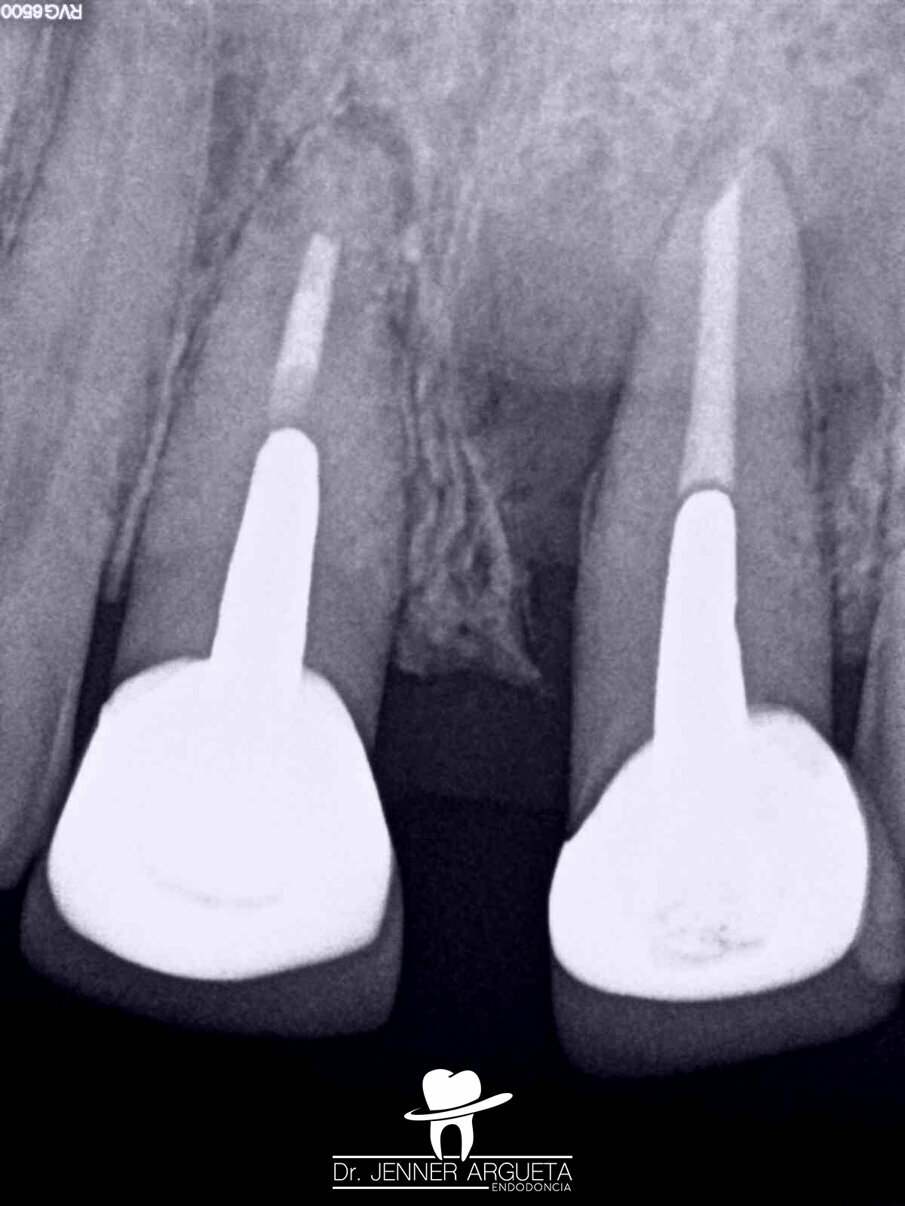 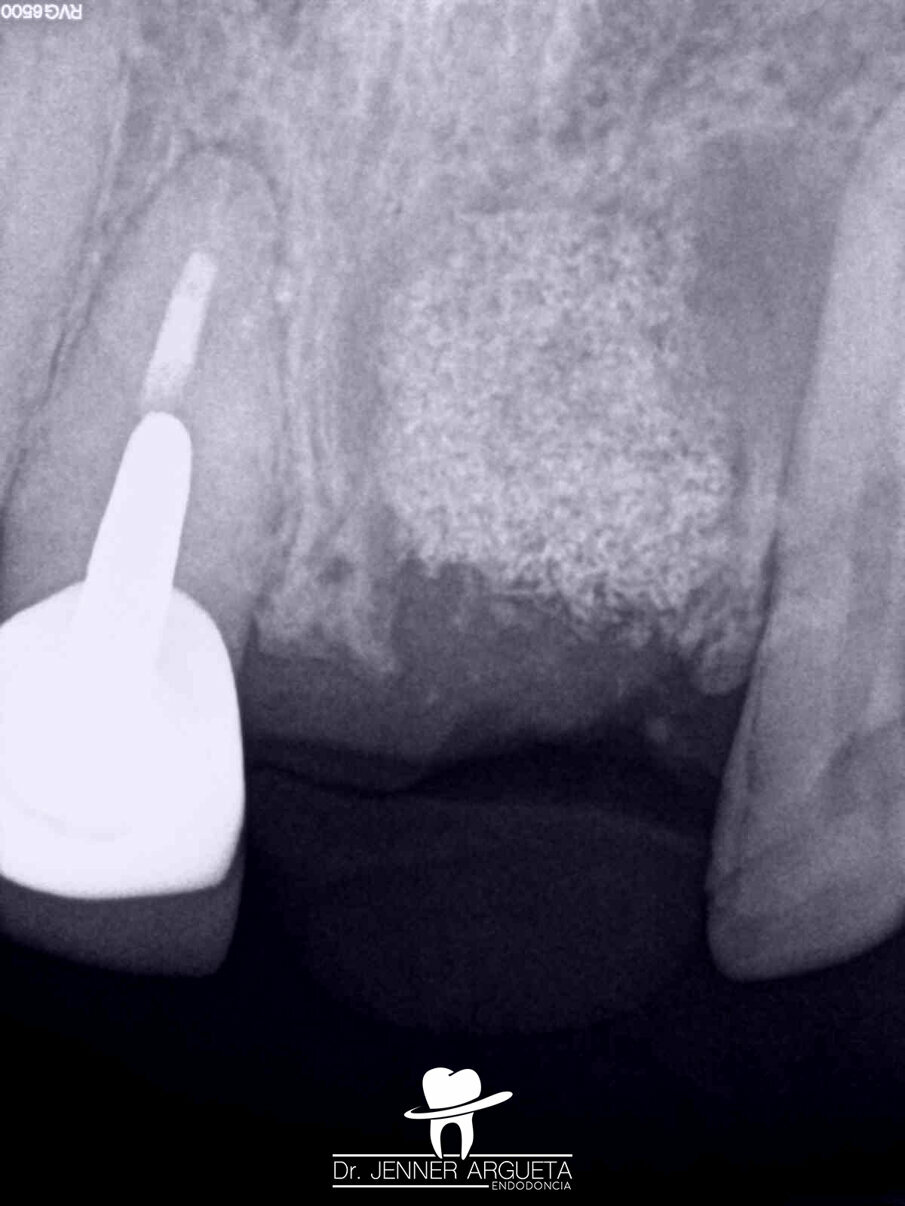 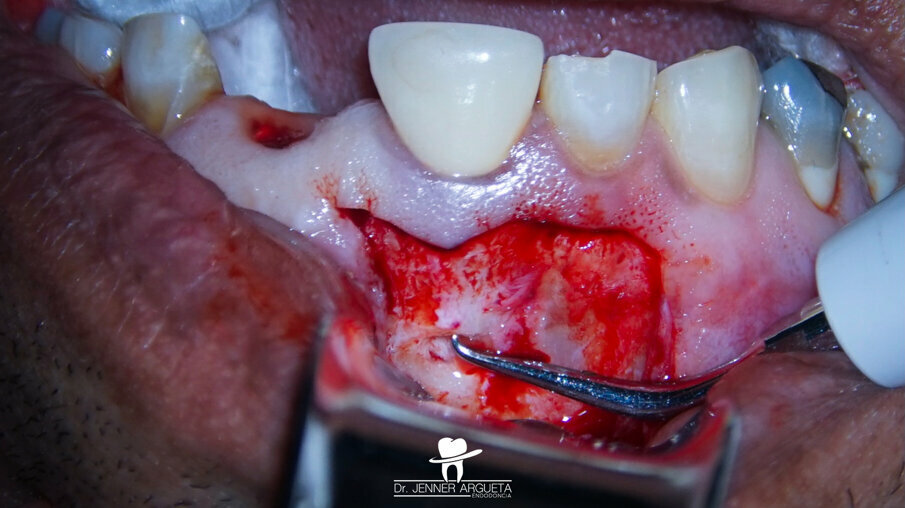 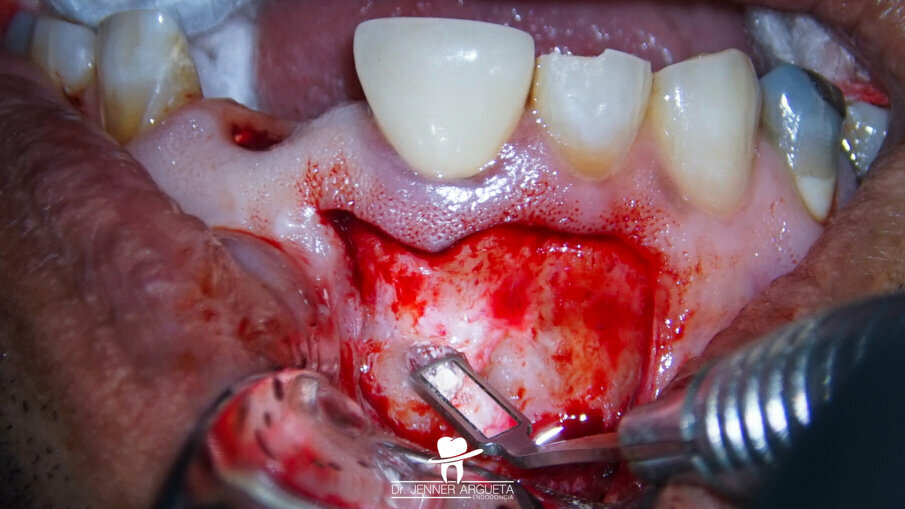 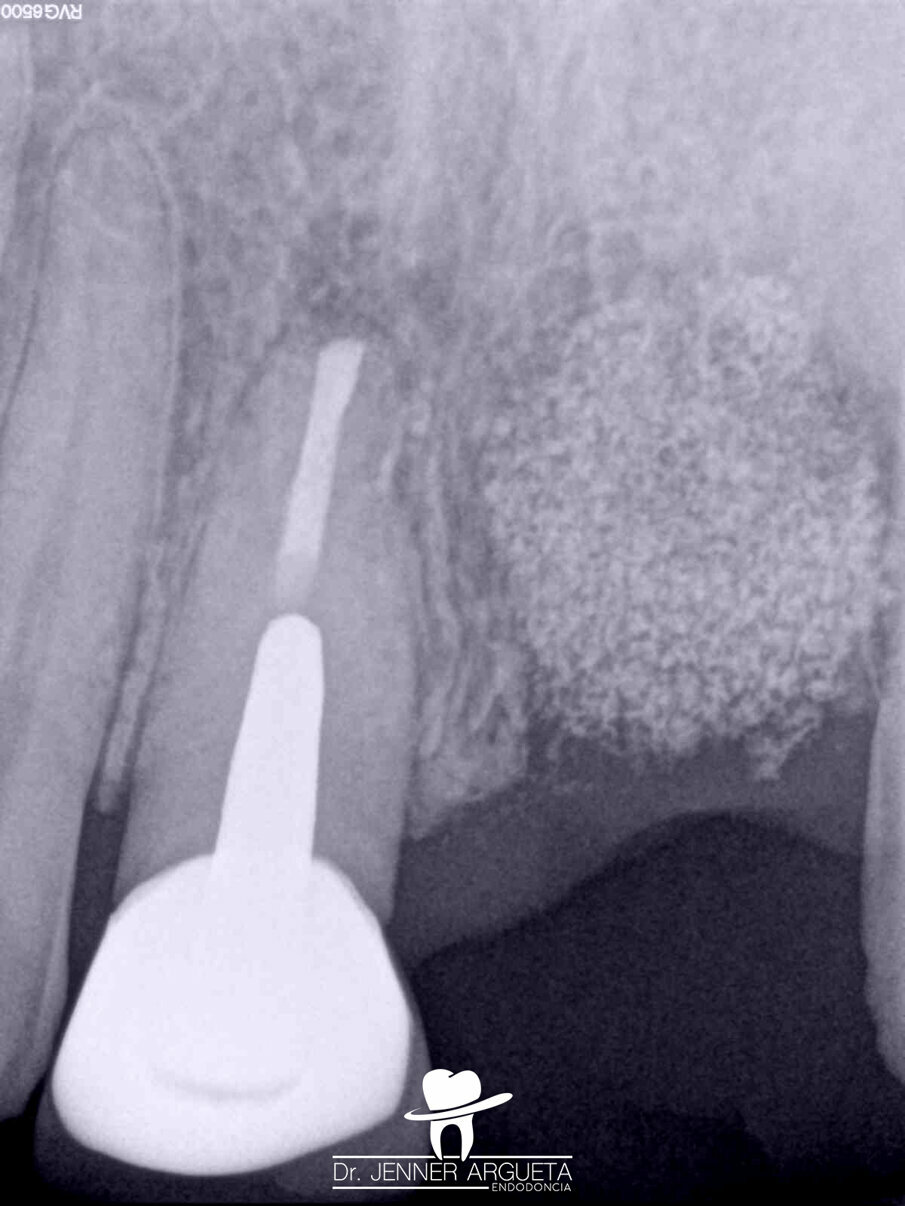 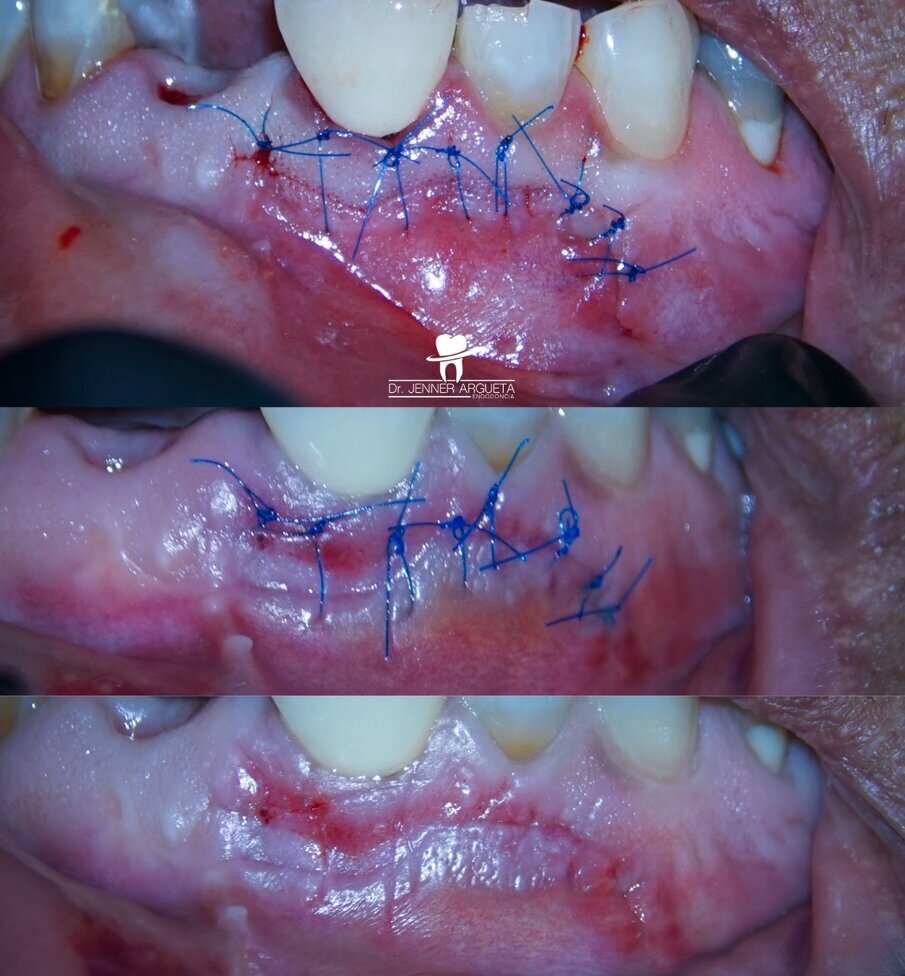 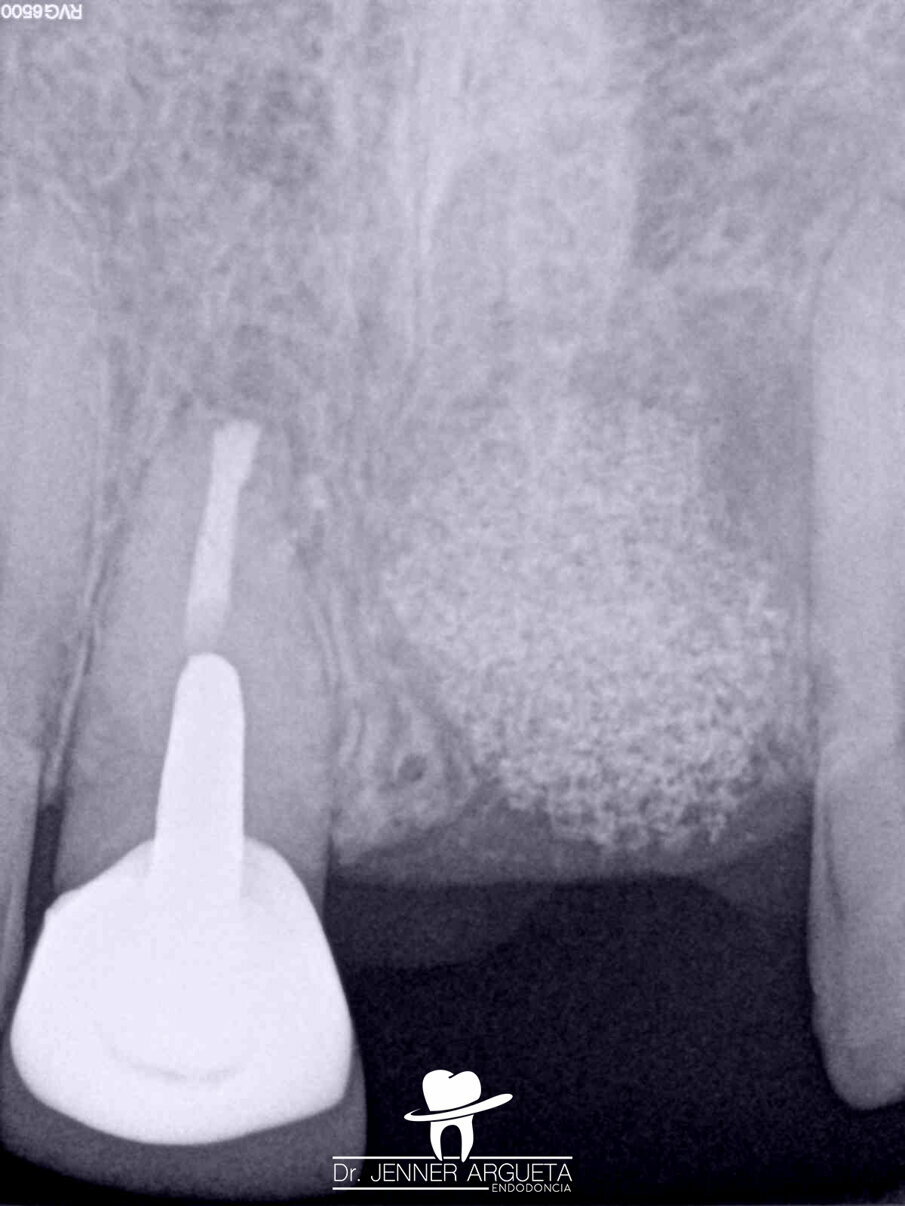 Nowadays in the field of endodontics, it is important to have a sealer material that fulfils almost all of the ideal properties described by Grossman, that is supported by evidence-based literature20 and that is easy to manipulate by practitioners who give pre-eminence to saving the natural dentition. Saving the natural teeth has great human and professional value, especially in the era of dental implants, where misdiagnosis might prematurely condemn the patient to losing the natural dentition. During the daily journey of endodontists, giving the best of themselves to preserving the natural dental organs, calcium silicate-based endodontic materials are an excellent ally because of their capacity to promote both healing and tissue mineralisation, their excellent biocompatibility, their remarkable sealing properties, their hydrophilicity and their comfortable handling, among other properties. Access to good materials and equipment, combined with the skills of experienced dental practitioners, is essential to ensure successful results during the journey of saving natural teeth.

Editorial note: A list of references is available from the publisher. This article was published in roots―international magazine of endodontics No. 3/2021.

MALMÖ, Sweden: On the occasion of EuroPerio10, which was held in Copenhagen in Denmark from 15 to 18 June, TePe held a party at its headquarters in ...

SEOUL, South Korea: A review by researchers from Sungkyunkwan University in South Korea has suggested that certain types of nanoparticles could be the ...

GBT and new concepts in cariology

An update on irrigation in Endodontics