Home/Articles
This autumn, under the “SDC” ticker symbol, SmileDirectClub plans to open its doors to investors. The teleorthodontics provider is offering a stake in its online service and more than 300 retail locations in the U.S., Canada, the U.K. and Australia. (Photograph: Shutterstock.com)

LEIPZIG, Germany: Studies have increasingly given credence to the old adage “Smile and the world smiles with you”, but our instinct for mimicking the facial expressions of those around us also means that a frown can catch on just as quickly. A straighter and more confident smile is the promise behind clear aligner therapy, and teledentistry providers are selling this promise more cheaply with the aim of capturing more of the orthodontics market.

“I know a lot of people are skeptical about SmileDirectClub, but it worked for me,” said Deniece Hudson in 2018. The 24-year-old university graduate spoke to Bloomberg when she had just one month to go in her teleorthodontics program with SmileDirectClub. With just $2,170 spent (€1,980), Hudson said, “Now I’m always smiling”.

Prominent startup SmileDirectClub is just one of a slew of companies offering tooth straightening treatment at half the price of dentist-led alternatives. The company says its practitioner-directed teledentistry model costs $1,895, can be completed in five to ten months and requires no practice visits. The traditional treatment model, the company claims, which includes orthodontic visits, costs patients $5,000–$8,000 and takes between 12 and 24 months. Patients with little cash and poor credit can even access SmilePay financing options.

But while sales of the company’s clear aligners are growing, not all are smiling with SmileDirect. In the last three years, 1050 consumers complained to the Better Business Bureau website about the results of their treatment, according to Bloomberg. Dentists have claimed that the company’s do-it-yourself teleorthodontics is putting patients at risk, and the American Dental Association has accused the company of operating with deceptive marketing practices in a petition to the U.S. Federal Trade Commission (FTC). Last year alone, the American Association of Orthodontists filed complaints with 36 state dental boards and attorneys general regarding violations by the company.

So where does all of this leave SmileDirectClub? Unapologetic and firmly standing behind its product. It says that fewer than 1% of people who suffer from malocclusion are treated annually, framing itself as a democratizing force in an industry that is not serving patients appropriately. According to the company, it is “a gateway to better oral health, not a detractor” and its policies comply with FTC regulations. SmileDirectClub is pushing ahead with a public share offering that will fund expansion into what it paints as an untapped at-home orthodontics market.

On Aug. 16, SmileDirectClub filed paperwork with the U.S. Securities and Exchange Commission (SEC) to go public on the Nasdaq exchange under the “SDC” ticker symbol. The company intends to raise around $1.2 billion this autumn by offloading up to 58.5 million shares at an expected price of between $19–$22 per share. An October 2018 funding round valued the 5-year-old company at $3.2 billion (€2.92 billion). If the public offering goes well, this valuation could double.

Raising cash will help SmileDirectClub to pay expenses, to get its clear aligners into more mouths in existing and new markets, and to introduce the new products that it says will further disrupt the oral care industry. According to the company’s SEC filing, it has treated over 700,000 patients through its online service and at more than 300 retail locations in the U.S., Canada, the U.K. and Australia. But future prospects for growth involve both risks and opportunities, as the company itself points out.

SmileDirectClub cites data from Frost & Sullivan to communicate a total available market (TAM) for orthodontics to potential investors. The company says that the TAM for orthodontics in the U.S. is 124 million patients and potential sales of $234 billion; globally, the company says that half a billion people could benefit from orthodontic work, which would generate sales of $945 billion. Including fixed appliances, the global orthodontics market is projected to increase from $1.5 billion to $2.6 billion between 2016 and 2023, according to 2018 figures from Allied Market Research.

"[The] company points out that the rapid digitization taking place in orthodontics, the ability of image capturing software to realize treatment plans, a higher awareness of esthetics among consumers, and the rise of e-commerce and mobile purchasing habits will help it to expand its business."

Addressing investors, the company says that the trends in health care that will help it grow are technological advances and increasing acceptance among consumers of remote care. In particular, the company points out that the rapid digitization taking place in orthodontics, the ability of image capturing software to realize treatment plans, a higher awareness of esthetics among consumers, and the rise of e-commerce and mobile purchasing habits will help it to expand its business.

But what about the risks? Among other things, the company asks potential investors to consider its history of net losses, limited manufacturing experience, and susceptibility to laws and regulations governing remote health care before buying stock. Sales at SmileDirectClub grew by 190% in 2018, but selling expenses increased. The company posted a loss of $74.8 million in 2018 and a loss of $32.8 million the year before. In the first half of the 2019 financial year, it sold around 232,000 sets of clear aligners, a number that nearly eclipsed full-year sales for 2018, but still posted a net loss of $52.9 million for the six-month period. With its supply agreement with Align Technology expiring this year, SmileDirectClub will have to step up the manufacture of its own aligners, which it hopes a 3D printing partnership with tech giant HP will help it to do. When it comes to regulatory concerns, SmileDirectClub, in the U.S. at least, will remain at the mercy of the state dental boards that regulate dentistry, and the U.S. Food and Drug Administration, which regulates clear aligners. 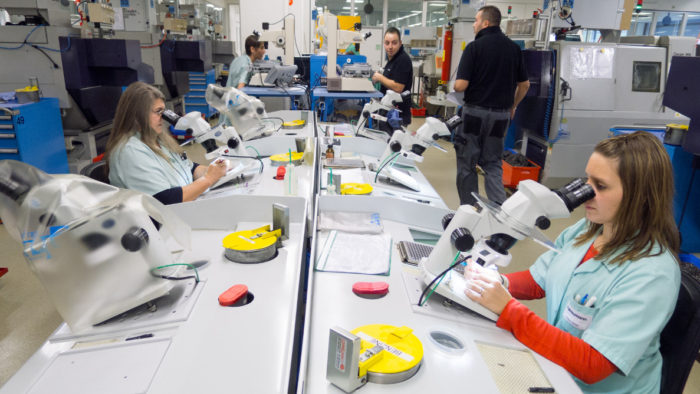 Competitors may have the advantage when it comes to production networks. (Photograph: Straumann Group)

Competition is another risk

Align Technology’s Invisalign system dominates clear aligner sales and it is likely that 2020 will see SmileDirectClub no longer having access to them. Furthermore, SmileDirectClub’s competitors are treating more younger patients. Align Technology said in its financial results for the first half of 2019 that it was seeing a greater number of younger patients using its aligners. Meanwhile, 65% of SmileDirectClub customers are aged between 20 and 40 years old and less than 5% of its customers are teenagers. When it comes to established international manufacturing, sales and distribution networks, major players such as Align Technology and the Straumann Group, which recently entered the clear aligner business, may have a clear advantage.