Patient receives dental implant under self-hypnosis: “It was easy to turn off the pain”

LEIPZIG, Germany: Physically lying in a dentist’s office but mentally walking barefoot through a mountain river—that is how a patient successfully received a dental implant under self-hypnosis without any anaesthesia. The patient, who underwent such a procedure for the first time under these conditions, was very satisfied with the result and reported that he felt hardly any pain during the procedure.

It all started when the patient, Tomas Schröck, a hypnotherapist with his own practice in Leipzig, asked his dentist, Dr Nico Lindemann, co-owner of the dental practice Dr Lindemann, Kurtz-Hoffmann and colleagues in Leipzig, whether he would be willing to support him in a self-experiment: an implant surgery performed under self-hypnosis without any analgesics or anaesthesia.

“Even though I had been involved with hypnosis before, owing to the patient’s desire for self-hypnosis, I would have to hand over the responsibility of pain elimination solely to him. On the one hand, I was optimistic that it would work. On the other hand, I wondered whether I could trust him enough so that the procedure could be performed properly as planned,” Lindemann told Dental Tribune International.

When asked about his motivation for the self-experiment, Schröck said that he primarily wanted to raise awareness of hypnosis and demonstrate what can be achieved. Especially for patients afraid of dental treatments or with drug intolerances, self-hypnosis can be a very helpful enabler of treatment without fear or substantial pain. He was also curious and wanted to try out on himself what he had been teaching his patients for years.

“During self-hypnosis, one assumes both the role of hypnotist and the person being hypnotised and gives oneself corresponding stimuli. At first glance, this may seem contradictory. However, once one understands how hypnosis works, it becomes clearer,” Schröck explained. It is assumed that everyone experiences trance states several times a day, often without realising it. Schröck gave the example of monotonous car journeys, during which the mind drifts off into everyday thoughts and the journey thus quickly passes. The same applies to hobbies, where time flies by. These moments, in which much occurs automatically via the subconscious, are everyday trances. This ability can be used for self-hypnosis. Individually selected memories or images are trained until they function largely automatically and only a few stimuli from the consciousness are necessary. 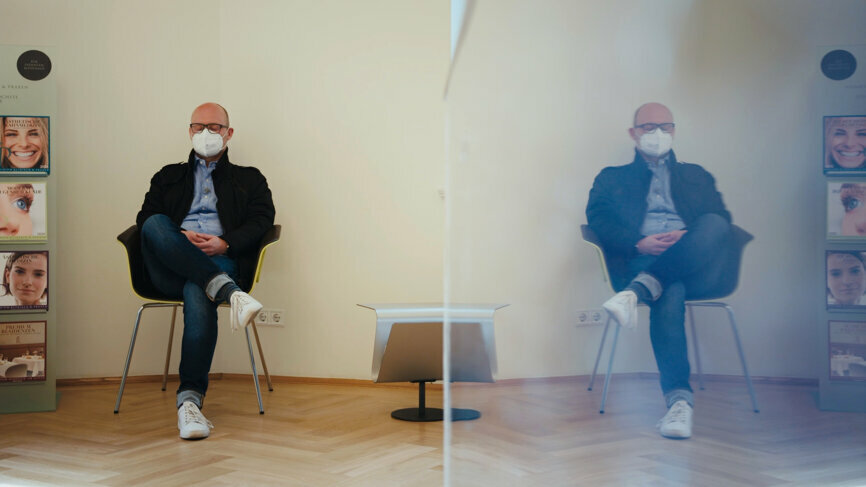 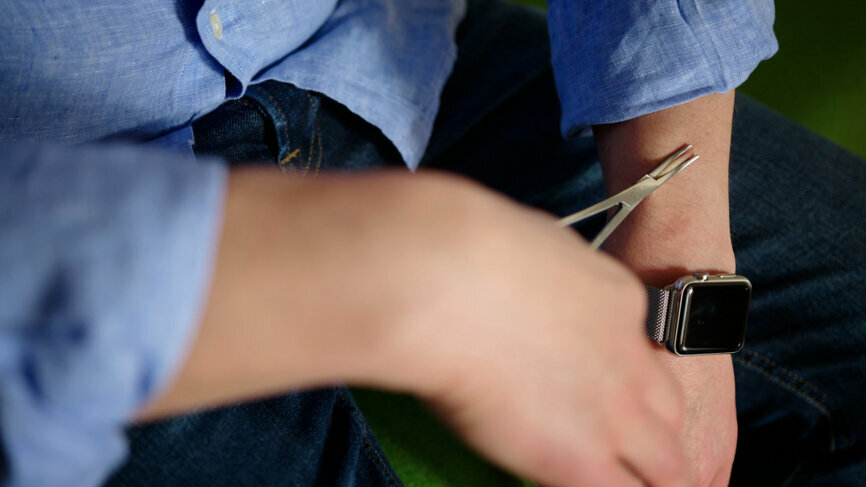 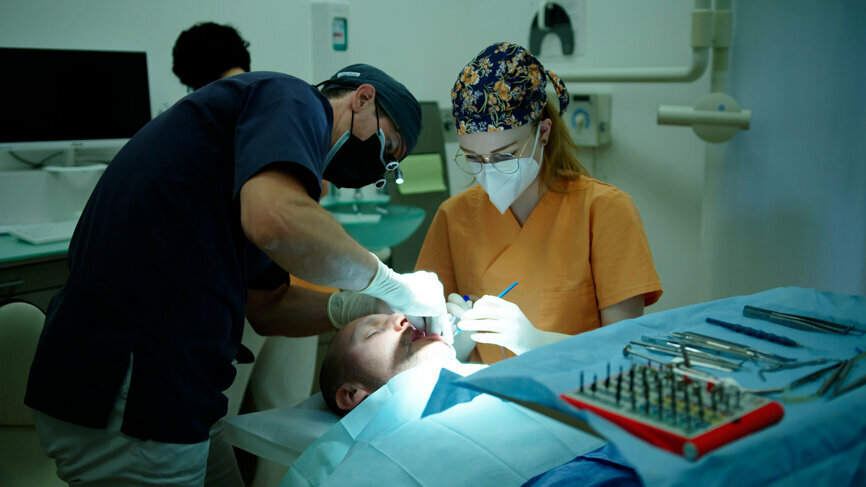 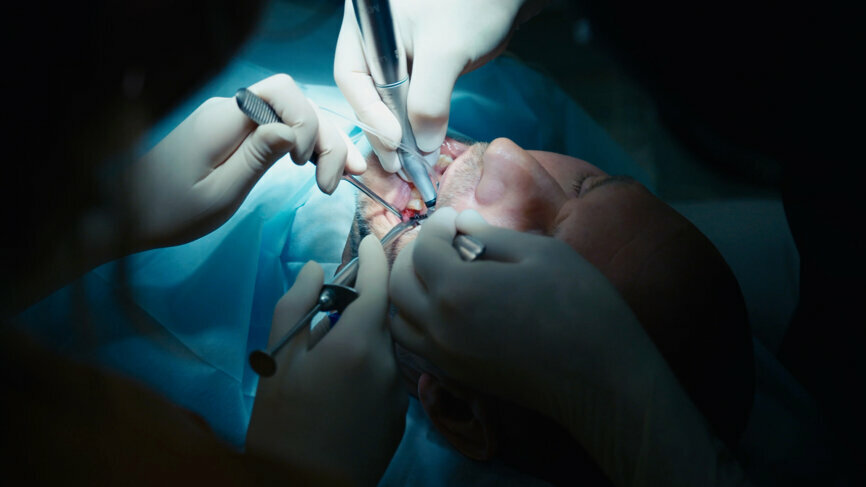 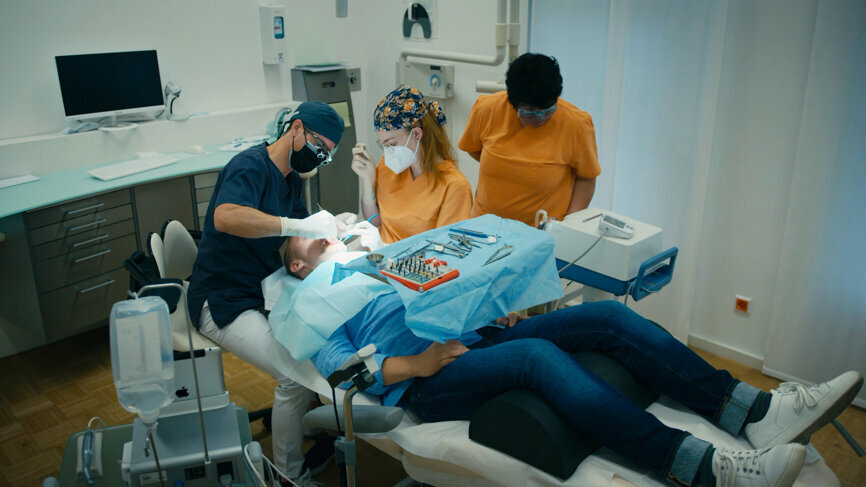 For his procedure, Schröck employed a memory of walking barefoot through an ice-cold mountain lake. “I chose this memory for two reasons. The feet are physically furthest away from the mouth and thus from the site of surgery, and I associate a strong feeling of euphoria with this memory. Euphoria and fear or negative pain tend to be mutually exclusive in my world,” he explained.

He continued: “The art of self-hypnosis is to consciously self-regulate oneself on one level in order to have unconscious experiences on another level. That means you are not switched off or entirely passive in self-hypnosis. As soon as I became too aware of what was happening in my mouth, I directed my attention back to my resource place in the mountain stream.” For the most part, Schröck only felt greatly diminished pain during the operation.

Keeping an eye on bleeding behaviour and hand signals

“The team was slightly nervous before the operation,” Lindemann said. All eventualities during the procedure—for example, what would happen if the patient did experience severe pain—were considered by the dental team in advance, so the nervousness quickly dissipated once the operation had begun. When asked to what extent the team supported the patient during the procedure, Lindemann replied: “We created a very calm and relaxed environment. In addition, we agreed on signals that the patient should give us in case he felt pain or he needed a break to get back into a deep enough state of hypnosis.”

During the placement of a single implant with minor osseous augmentation in an open procedure in the mandible with subsequent suture closure, the dental team had to pay particular attention to the bleeding behaviour, which differs from that under vaso-constriction.

A matter of trust

Although the hypnotherapist was convinced that his self-experiment would succeed, he harboured some doubts. In the run-up, he asked himself whether he would really manage to concentrate for the entire duration of the surgery. “I am very satisfied with the result. In retrospect, I was even a little surprised at how quickly it went, and how easy it was to turn off the pain,” Schröck explained.

He failed only to control the bleeding to a level less than one would expect without anaesthesia. “There are enough studies and case vignettes in which similar things have been proved. Unfortunately, in the heat of the moment, I forgot to focus on that too.” However, he plans to work on that aspect in the subsequent operation, during which the cover screw will be removed.

According to Lindemann, the mutual trust between the patient and the team made it possible to fully concentrate on the operation. He concluded: “I am grateful for my great team and for the trust that our patient placed in me.”

LEIPZIG, Germany: Statistical tracking has been a priority for the governments of Scandinavian countries in recent years,

share
save
advertisement
Business Tue. 16. August 2022
Medit up for sale at €2.9 billion—reports

SEOUL, South Korea: Leading 3D dental scanner manufacturer Medit is on the market and could fetch a price as high as KRW4 trillion (€2.97 billion), ...

DARMSTADT, Germany: Exocad, an Align Technology company and a leading dental CAD/CAM software provider, has recently announced that Insights 2022, the ...

DARMSTADT, Germany: Exocad, an Align Technology company, recently announced the release of DentalCAD 3.1 Rijeka, the next generation of its CAD software ...

Exocad, an Align Technology company, will host its third exocad Insights event between 3 and 4 October at the Palma Convention Centre in Palma de ...

News Wed. 18. May 2022
Exocad supports fund for US dental laboratories

DARMSTADT, Germany: Exocad, an Align Technology company and a leading dental CAD software provider, has donated €10,000 to the US-based National ...

Different is Better - A New Way to Administer Dental Anesthesia