A number of factors are contributing to a decline in popularity of fixed appliance and wire treatment in favour of clear aligners, according to market research company iData. (Image: Alexandr Grant/Shutterstock)

Clear aligners are simple custom-made orthodontic devices that fit tightly over the teeth and offer aesthetic, practical and cost-related advantages. The complexity of cases that can be treated with clear aligner therapy has increased over time and now ranges from simple anterior cases requiring mainly aesthetic movements to severe cases involving potential extractions or multiple relapses. Owing to these and other factors, clear aligners are quickly becoming the dominant and preferred malocclusion treatment.

Many patients who previously would not have opted to seek orthodontic treatment are now undergoing clear aligner therapy. This can be attributed to the visual benefits that clear aligners offer compared with fixed appliances as well as to the ability of many manufacturers to address the simpler aesthetically focused cases cost-effectively. Improved materials and better scanning technology are resulting in products becoming progressively more comfortable and more adept at treating malocclusion effectively and quickly.

Patients prefer clear aligners to fixed appliances and wires, mostly because of the greater comfort offered, the aesthetic appearance of the trays and the fact that they can be removed before eating. In August 2020, Dentsply Sirona, one of the largest names in orthodontics, announced that it was exiting the traditional orthodontics business. This was an indication of the decline in popularity of fixed appliance and wire treatment in favour of clear aligners. Both dentist-led clear aligner treatment and treatment with fixed appliances incur a significant cost to the patient; however, an increasing number of less expensive alternatives now exist on the market. 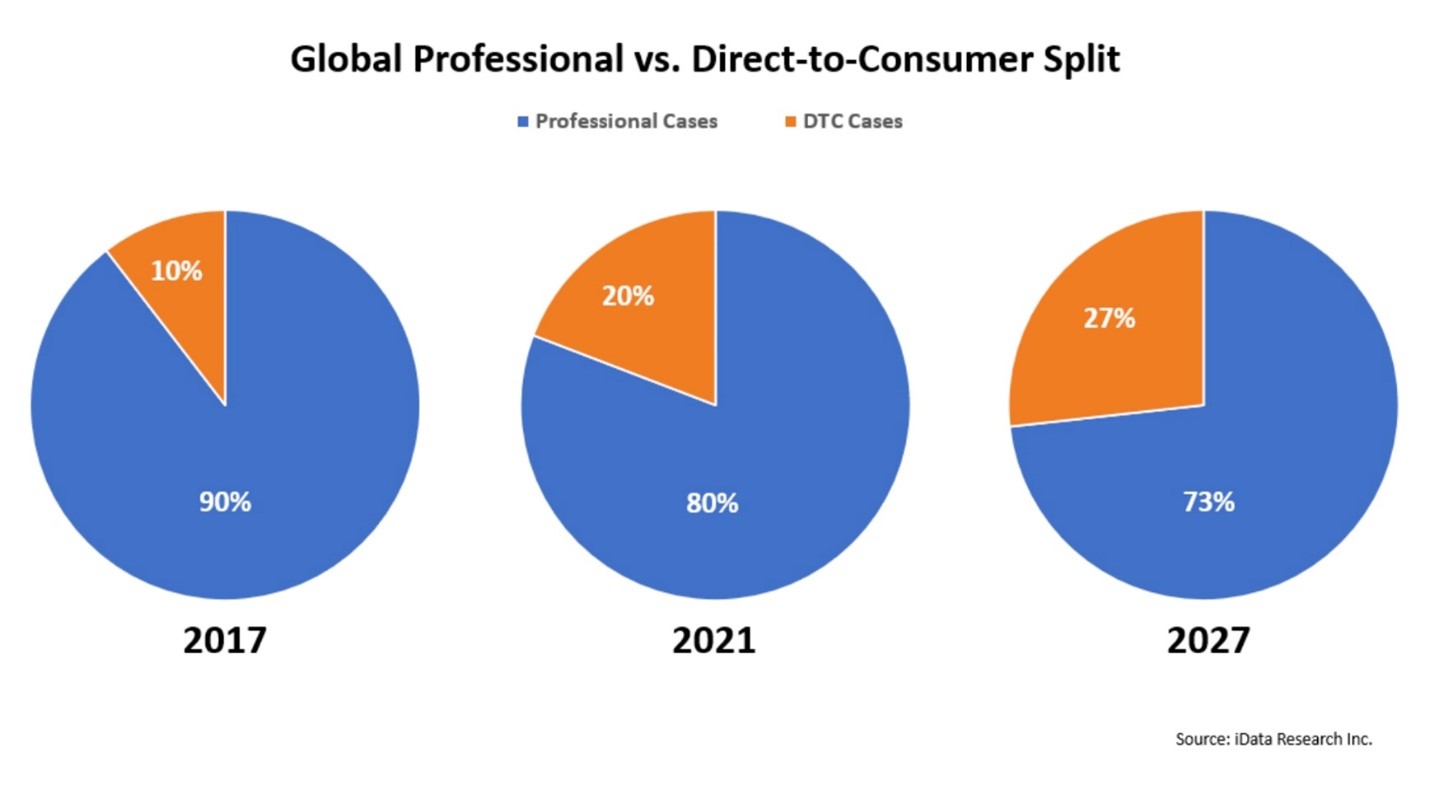 Direct-to-consumer clear aligner treatment is gaining in popularity, but the market is still in the early stages of development outside of North America and Europe. (Image: iData)

The SARS-CoV-2 pandemic had a considerable impact on the D2C market. However, its growth was less severely affected than that of the dentist-led clear aligner category, owing to the fact that patients received treatment remotely and had no need to cancel in-person check-ups. This led to further gains by the D2C segment over dentist-led treatment. However, these gains appear to have been largely temporary because, by 2021, the market shares of the dentist-led and D2C segments had reverted to their pre-pandemic split.

SmileDirectClub pioneered the D2C method of clear aligner treatment in 2014. Through the company’s use of SmileShops—pop-up locations where potential patients can quickly undergo intra-oral scans—and a collaborative network of dental office locations, SmileDirectClub has treated over 1.5 million patients worldwide. Ease of operation, affordable prices and the convenience of having no mandatory in-office visits have resulted in the D2C model becoming a key part of the clear aligner market, especially in North America. In addition to SmileDirectClub, Byte and Candid have made notable inroads into the provision of D2C clear aligner therapy in North America.

However, despite its rise in popularity in North America, the D2C market has faced ongoing problems relating to public perception and trust. Major market players offer treatment options that address orthodontic issues less adequately than dentist-led treatments do, and some patients have reported that D2C treatment even worsened their malocclusion. D2C clear aligner therapy accounts for a substantial share of the North American market but is yet to become a market mainstay in the rest of the world. 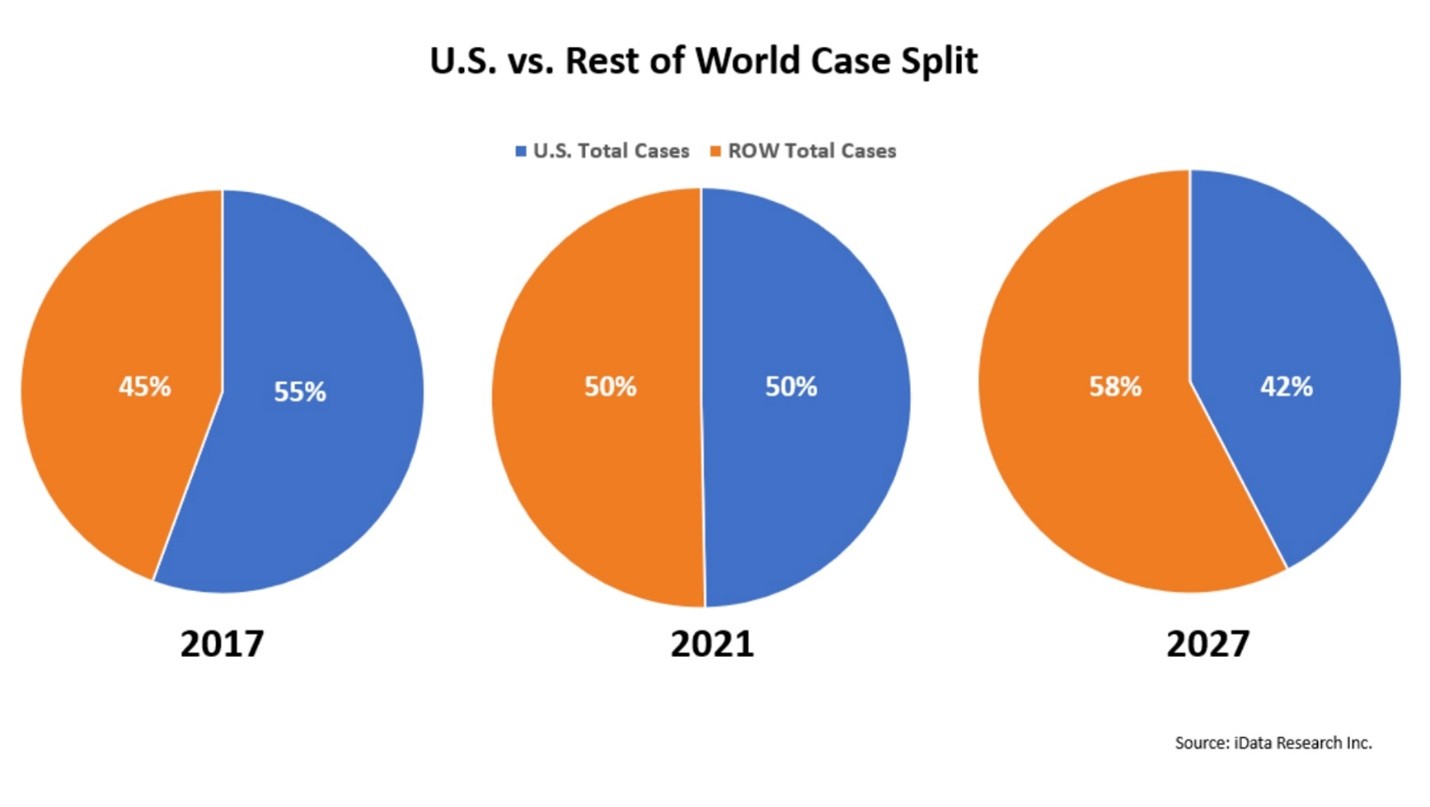 A rapid shift is taking place: clear aligner treatment is gaining popularity around the globe and the US no longer accounts for the majority of case starts. (Image: iData)

Clear aligners: around the world in 80 trays

The clear aligner market is swiftly changing from a US-centric market to one that is more globally balanced. In 2017, over 55% of all clear aligner cases were treated in the US. This number dropped below 50% in 2021 and is projected to fall to 40% by 2025.

The perceived importance of improving one’s appearance differs between countries, and in certain countries, it has a high cultural significance. Many consumers who previously would not have opted for treatment with fixed appliances are now undergoing clear aligner therapy, and many manufacturers can cost-effectively address the simpler cases.

Moderate and complex professional cases require a premium cost, thereby pricing out many potential patients, and many of the most complex cases are still being treated with traditional braces. An estimated 75% of the global population suffer from malocclusion, and this means that a massive market opportunity remains unaddressed, particularly for those who are currently unable to afford the more expensive dentist-led treatment. However, an increasing number of D2C providers are beginning to be able to tackle cases of more severe crowding or spacing, overbite correction and other predictable and moderate movements.

The rest of the world is still in the early stages of adopting the D2C treatment as a legitimate option. DrSmile from Germany is an example of a company that is starting to break through in the European market, and the North American giant SmileDirectClub has made a global impact since entering the international market in 2019. The Asia-Pacific region has only a marginal D2C market, as India’s Toothsi and Japan’s Oh my teeth are regional players; however, multiple D2C providers can be found in Australia. In South America, Brazil is home to a number of notable D2C clear aligner companies.

Clear aligners: an industry on the rise

The global clear aligner market has already cemented itself as a vital facet of the orthodontic industry, and it is projected to maintain much of its meteoric growth. Dentist-led cases will soon overtake fixed appliances as the preferred treatment option for malocclusion, and the D2C market will continue to attract new patient demographics. Globally, a rapid shift is taking place whereby the treatment is gaining popularity around the globe, and the US no longer accounts for the majority of case starts.

For 16 years, iData Research has been a strong advocate for data-driven decision-making within the global medical device, dental and pharmaceutical industries. By providing custom research and consulting solutions, iData empowers its clients to trust the source of data and make important strategic decisions with confidence.

Why do we need to straighten teeth? How do we do it? What is the best way? These are the big questions nowadays, and I think that the answers to these ...

The digital dentistry market in Asia Pacific has started to gain traction because of technological advances and the demand for improved precision, ...

CHENNAI, India: The Indian Orthodontic Society (IOS) has submitted a complaint about direct-to-consumer (D2C) clear aligner therapy to the country’s ...

The concept of interproximal enamel reduction (also referred to as IPR or stripping) as a means of providing space to alleviate a crowded dentition was ...