Why digitalisation in dentistry is now even more important than everUK dentists need peace of mind on PPE and COVID-19 complaintsJump in prescriptions by dentists during lockdown stokes fear of antibiotic resistanceInterview: Effects of COVID-19 on dentistry in Asia Pacific, Part 1Dental education and COVID-19: Study identifies challenges and opportunitiesHow to protect patients and personnel from COVID-19Mitigation methods currently in place are effective, study showsDental sales return, with caveatNew survey highlights dentists’ pessimism about the futureADA supports point-of-care COVID-19 testing by dentists
Visit microsite

The spread of COVID-19 has caused most dental offices in Israel to close their doors, and it has sent the country into lockdown for the Passover holiday period. (Image: upprint/Shutterstock)

Israel and its dentists are on lockdown

Back to news International
By Jeremy Booth, DTI
April 13, 2020

TEL AVIV, Israel: The COVID-19 pandemic has resulted in the closure of most dental clinics in Israel, and a nationwide lockdown is in effect for the seven-day Passover religious holiday. Stephen Pohlmann, a Tel Aviv-based veteran dental salesman, spoke to Dental Tribune International about the current situation and some of the challenges that the country is facing.

Israel’s Ministry of Health instructed dentists on 17 March to postpone all non-emergency treatments. According to Pohlmann, dentists and hospitals are working together to align their services in response to the order. “Dentists are limiting their work to emergencies only. And a proportion of those cases are being directed to health clinics. So very few dental offices are open, and those that are are trying to coordinate services so that the minimum number are available, based on location, opening hours, etc.”

A local dentist told Pohlmann that seeing patients was simply too risky for some practices. The dentist said: “Most dental practices are closed because of the lack of business, but very few can take the risk of working in the area that is the most infectious of all. So there have been some emergency systems set up to list the dental surgeries that are properly set up for treatment during the coronavirus crisis.”

Pohlmann, who has 56 years of experience in the dental market and is currently a marketing and international sales consultant at UBrush!, added that local suppliers of dental equipment are working to meet ongoing but limited demand. He said: “The dental dealers are officially closed, but again, they are keeping an emergency line open for exceptional supplies.” 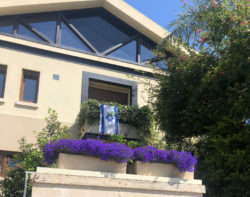 Many Israelis had a virtual Passover Seder this year and the ritual feast marked the beginning of a week at home. (Image: Stephen Pohlmann)

Israel went into lockdown on 8 April with a one-week shelter-in-place order that is set to last for the duration of the Passover religious holiday. The health ministry has also gone against World Health Organization advice by making it compulsory for citizens to wear face masks outside of their homes from 12 April, and this has increased pressure on the pricing and already scant supply of personal protection equipment.

“I bought a few masks yesterday,” Pohlmann said. “In the pharmacies they range from between $2 and $3 each for the basic disposable type. As far as I know, the dental dealers are still selling their stock in boxes of 100 at a price of about $15 per box. So the public is paying about 2,000% more. Amazon is also quoting $15 per 100, which is about four times more than a few weeks ago.”

Pohlmann also pointed out that establishing solidarity among Israel’s various religious groups is proving to be a challenge in containing the spread of SARS-CoV-2. He said: “Israel is trying so hard to keep a lid on the virus. [As of 9 April] we now have over 8,600 cases and 52 deaths. Most of the population are behaving but we are having some problems persuading the very religious to stop crowding together.”

According to the BBC, Israel’s ultra-orthodox Jewish religious community makes up just 12% of the population, but hospitals have reported that this group accounts for 30%–50% of COVID-19 cases. Members of this community are often not receiving updates from health authorities. Pohlmann added that the Arab citizens of Israel are also suffering more than the country’s secular and moderately religious Jewish majority. “This is not because of any obvious negligence, but because of their culture of—like in Spain and Italy—larger and more crowded families, but also a delayed relay of information and services,” he added.

LONDON, UK: A review of the evidence relating to the use of aerosol-generating procedures (AGPs) and the risk that they pose for the transmission of SARS-CoV-2 in dental settings has resulted in a further reduction to the fallow time that is recommended by UK dental authorities. Dental professionals can now calculate the time necessary between dental procedures using a free online tool.

A graduate of Paris Descartes University (now the University of Paris), Dr Léon Pariente currently runs a private practice in the French capital that specialises in implantology and periodontics. In an upcoming free webinar, he and Dr Karim Dada will discuss how various digital technologies, such as CBCT imaging and CAD/CAM, have replaced traditional modalities and enhanced the aesthetic aspects of restorations. Pariente spoke with Dental Tribune International about this topic ahead of the presentation on Thursday, 25 June.

Many are calling it the post-pandemic era—the time in which we will simply have to live with the SARS-CoV-2 virus as part of our daily personal and professional lives. For dentists and their teams, a key aspect of this will be the adoption of a set of new hygiene protocols that will help to reduce infections and make dental settings safer. On Tuesday, 23 June, Prof. Lorenzo Breschi of the University of Bologna in Italy will host a free webinar that will focus on the incorporation of these new hygiene protocols into clinical practice and guiding patients on the importance of their home dental care regimes.

DUBAI, UAE: The innovation offered by X-MIND trium and X-MIND prime confirms ACTEON as a leader in designing less invasive, less traumatic and the most technologically advanced dental imaging solutions. The company is showcasing both devices at AEEDC 2020 and invites participants to learn more at the ACTEON booth (#6 G01).