BURNABY, British Columbia, Canada: According to a new market report by iData Research, a leading provider of international dental market research, the Asia Pacific implant market is transitioning towards inexpensive implant products. Growth is being driven by rising demand for aesthetically pleasing long-term dental restorations and this has resulted in demand for more affordable options. However, this movement towards low-cost implants is occurring at differing rates across each of the five major Asia Pacific regions.

Trends in overall dental implant market
The Asia Pacific dental implant market is expected to experience high levels of growth by 2024, reaching almost US$890 million, as reported in a recent study by iData Research. This market analysis covered dental implants (premium, value and discount products), final abutments (stock, custom and CAD/CAM products) and surgical guides. Across all countries, revenue growth will be driven by the increasingly strong evidence in favour of implant-supported restorative solutions, along with a growing patient base. While competitive price cuts and inexpensive solutions have limited potential market growth, these factors are primarily spurred by high unit demand.

Japan: Surgical guides driving market
In 2017, the dental implant market in Japan exhibited modest growth. Japan has recovered since its dental implant market bottomed out in the wake of negative press reports in 2012. While the rate of implants placed per capita remains relatively low in Japan, the market is now attracting interest from both patients and dentists. Renewed interest in dental implant treatment has resulted in high growth of the surgical guide market in Japan, in part due to past highly publicised reports of inaccurate placement. 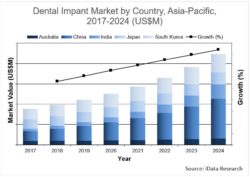 South Korea: Reimbursement expansion driving significant growth
In 2014, the National Health Insurance Service of South Korea significantly increased dental implant coverage for those 75 years old and over. The minimum age for eligibility was lowered to 70 in 2015 and to 65 in 2016. Coverage was similarly increased for dentures in 2016. This has driven what is already the world’s most developed market for dental implants and final abutments, and it will continue to do so as more people take advantage of the insurance changes and as the population ages. South Korea is unique in that the market is dominated by domestic discount implant manufacturers. Thus, the transition towards inexpensive options has already occurred.

Australia: Shifting product types in growing market
In 2017, the market for dental implants in Australia was transitioning, as it was elsewhere, to more affordable implant products. However, another global trend in dental implantology that was most prevalent in Australia was the shift towards CAD/CAM final abutments, which are relatively new to the market and previously were a very costly product. Manufacturers and dental laboratories have invested in improving CAD/CAM technology to make production more efficient and, therefore, more affordable to dental professionals. As a result of these cost-efficient technology improvements, a growing number of dental manufacturers and laboratories are now able to produce CAD/CAM abutments, making these products more accessible in Australia.

China: Demographic and economic factors creating huge market potential
China is experiencing high growth across the dental industry and its dental implant market is expanding rapidly, even compared with the rest of the Asia Pacific region. Historically, dental health has been poor in China. Despite improvements, a 2010 survey by the Ministry of Health found that the vast majority of those between the ages of 65 and 74 have dental caries. In response to increasing discretionary income, demand for dental implant restorations has risen. To meet that demand, the number of private dental service clinics and chains is also rapidly expanding. Moreover, the Chinese population is ageing dramatically, with the over-60 population currently exceeding 200 million. The expanding patient base will generate demand for more affordable products, accentuating the transition to value and discount products in China. 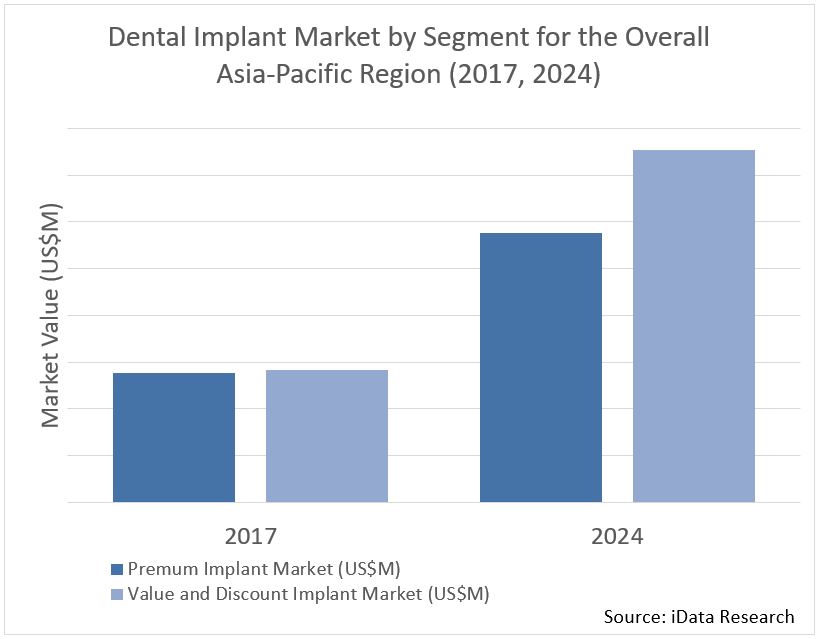 India: Early development
While China is forecast to become the world’s next major dental market, India remains the least developed of the Asia Pacific regions studied. Nevertheless, market growth in India is exceedingly high. Value and discount implant brands have already succeeded in capturing a significant portion of the Indian market. As the country continues to adopt dental implant technology at a growing rate, these brands will hold the majority of the market, significantly outpacing premium brands.

Discount and value implant brands crowding competitive landscape
The competitive landscape in the Asia Pacific dental implant market includes a diverse range of multinational companies. Global premium implant brands, such as Nobel Biocare and Straumann, attained leading market shares across the region, with the exception of South Korea. However, the competitive landscape is becoming increasingly crowded, with multiple affordable implant options achieving high revenue growth. In response to this, major premium companies have pursued acquisition strategies to broaden their market exposure. In 2016, Straumann acquired Equinox, a popular value implant brand in India, as well as Anthogyr’s implant business in China. Dentsply Sirona has also acquired multiple implant brands in recent years, such as MIS Implants Technologies. The share of the market consisting of discount and value products is forecast to increase to over 55 per cent by 2024.

The reports can be purchased at https://idataresearch.com/product-category/dental/dental-implants.

HYDERABAD, India: The Indian dental care services market is estimated to experience a double-digit growth rate, reaching up to US$2.2 billion (147 bn. ...

Digital Matrix® Implant With No Abutment & No Limits

"Catching Up to Speed":

ORANGE, Calif., US: Western Dental announced in May that it had entered into a definitive agreement to purchase fellow dental service organisation (DSO) ...