The history of plastic toothbrushes and how they pollute our planet

The history of plastic toothbrushes and how they pollute our planet

Plastic toothbrushes do not end up in landfill only; they also get into our forests, rivers and oceans. (Photograph: Stevie O’Cuana/Shutterstock)

LEIPZIG, Germany: A couple of weeks ago, the US company 4Ocean, which specialises in removing plastic waste from the ocean, shared a post on Facebook that shows visually just how much our oral hygiene routine contributes to the world’s plastic pollution crisis. These striking photographs capture multiple buckets filled with colourful toothbrushes washed ashore on the beaches of Bali and picked up by the local clean-up crew. In the comment sections, many readers stated that they could not understand how or why so many toothbrushes ended up in the ocean in that area, or for that matter, in any other part of the world. The answer to this question is quite simple when you look at the history of plastic toothbrushes.

The plastic toothbrush as we know it today has not actually been around that long. Before its invention in 1938, tree twigs or tools made from animal parts were used to maintain a healthy mouth. In the book Dental Biotribology, the authors discuss the earliest roots of toothbrushing, which dates back to 3500 BC when chewing sticks were used in Babylonia. Chinese records of chewing sticks from 1600 BC “show that one end was chewed until it became brushlike, while the other end was pointed and used as a toothpick. […] The first bristled toothbrush also originated from China at around the same time and was brought back to Europe by traders”. In fact, chewing sticks, also called miswaks, remain an important part of Muslim culture and are still widely used today in the Middle East, Africa, rural southern US and Asia. 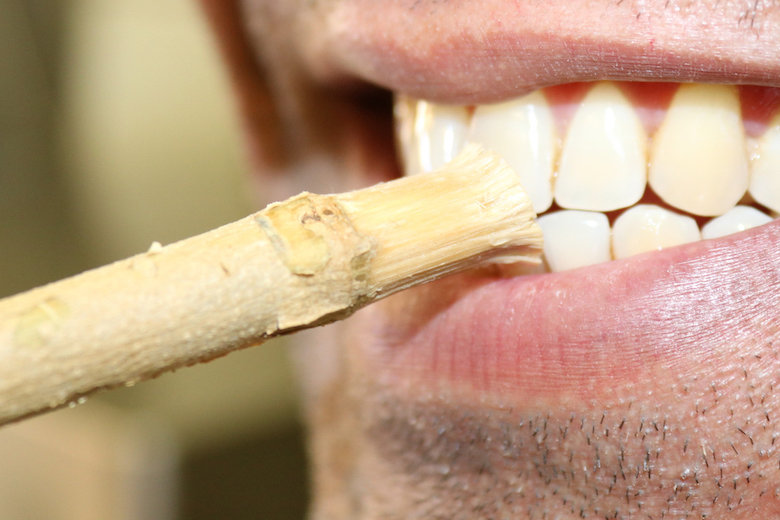 The miswak, a tooth cleaning twig made from the Salvadora persica tree, is an ancient form of the toothbrush as we know it today. (Photograph: ustun ibisoglu/Shutterstock)

In the meantime, the evolution of the toothbrush took a different turn in Europe and later in North America. As mentioned before, animal parts, such as handles made out of cattle bone and bristles from horse hair, were the main resources for toothbrushes. Then nylon was invented and the first nylon bristle toothbrush made with nylon yarn went on sale in 1938. Nylon bristles remained the preferred material for bristles, but manufacturers moved on to thermoplastic materials for the handles, as described in Rachel Sammons’ book Control of Dental Plaque.

The shift from natural and biodegradable materials to synthetic or semi-synthetic polymers has had a big impact on our planet in two ways. Owing to its low cost, easy production process, versatility and imperviousness to water, plastic has prevailed as a material over the last couple of decades and has actually allowed humanity to make technological advances in all areas of life. However, the environmental effects are severe, since the chemical structure of plastic makes it resistant to the natural process of degradation. Researchers are uncertain about the exact amount of plastic waste that has been produced in the last century, but a paper by American researchers titled “Production, use, and fate of all plastics ever made” states that 8,300 million metric tons(Mt) of virgin plastics had been produced by 2017 and “roughly 12,000 Mt of plastic waste will be in landfills or in the natural environment by 2050”.

Food packaging and other single-use plastic items aside, toothbrushes contribute a vast amount to this total. It can be estimated that in the US alone about one billion toothbrushes end up in the rubbish bin each year. This figure is reached if every single citizen uses plastic toothbrushes and replaces them every three to four months as the American Dental Association and many other international health organisations recommend. Considering the world’s population of 7.53 billion people, that makes roughly 29.4 billion toothbrushes each year. On average, a plastic toothbrush weighs around 20 g and so it can be calculated that the whole of humanity produces 600 million kg of plastic toothbrush waste in only 365 days. What many people do not know is that toothbrushes are not recyclable, since small parts get stuck in the machinery. That is why they end up in landfill and “because plastic is essentially indestructible, that means nearly every single toothbrush made since the 1930s is still out there in the world somewhere, living on as a piece of trash,” as the writer of an article in National Geographic put it.

Of course, this number is a worst-case scenario estimate and is not conclusive, since many people have switched to electric toothbrushes (which produce significantly less waste) or to zero-waste toothbrushes. Companies and manufacturers are slowly starting to invest in plastic alternatives derived from natural sources, such as bamboo for the toothbrush itself and starch or cellulose for packaging. Bamboo toothbrushes, for example, have moved into many bathrooms in the last couple of years, since they are now more easily obtainable in most chain pharmacies. Bamboo is the fastest-growing plant on earth and is naturally antibacterial. Therefore, it makes a great renewable material for toothbrushes. 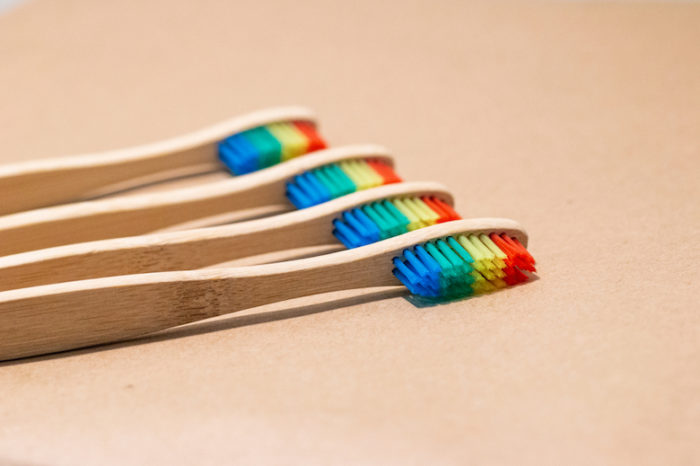 Bamboo is the fastest-growing plant in the world, and it is considered one of the most sustainable raw materials on the planet. (Photograph: Shawn Sosa/Shutterstock)

Certainly, it can be argued that, even if every single person in the world switched to eco-friendly toothbrushes within the next week, there would still be many more areas in life that would need to be tackled to reverse the plastic pollution crisis. A report from March 2019 by the international non-governmental organization World Wide Fund for Nature suggests that, at present, not all is lost. According to its research, although “the global plastics pollution crisis will only worsen unless all actors across the plastics value chain are made more accountable for the true cost of plastics to nature and people”, what has been “created in one generation […] can be solved in one generation”.

In the past few years, regulations on single-use plastic items have been put in place. Free plastic carrier bags, for instance, are a thing of the past in most countries around the world and shops now ask for payment for them. There are many other examples that can be seen in everyday life where companies have already jumped on the zero-waste train. These include ice cream parlours that have swapped plastic spoons for wooden ones, coffee shops that give discounts if their customers bring reusable mugs and bars that offer straws made from natural materials. As The Guardian reported, “The European parliament has voted to ban single-use plastic cutlery, cotton buds, straws and stirrers as part of a sweeping law against plastic waste that despoils beaches and pollutes oceans.” This ban is expected to come into force by 2021 and will affect all EU member states. Even though this shift is forward-thinking and a change for the better, at present there is no regulation on plastic toothbrushes in place.

In the end, it can be argued that the plastic toothbrush consumption problem is not necessarily the most pressing factor that contributes to the pollution crisis. But it seems that it is a very practicable and easy place to start.

And History How Of Our Planet Plastic Pollute The They Toothbrushes

Related articles
News Tue. 24. May 2016
A short history of the NiTi file revolution

Nowhere in dentistry is technical progress as rapid as it is in modern endodontics. The development of flexible nickel-titanium (NiTi) files in the late ...

News Fri. 15. October 2021
Interview: “Our service meets all of the needs that arise in the dental clinic and laboratory”

Intra-oral scanners and 3D printers were two of the biggest topics in the halls of this year’s International Dental Show (IDS) in Cologne in Germany in ...

The temporomandibular joint (TMJ) has a functionally complex articulation that during phylogeny underwent an adaptation also linked to posture change after ...

News Tue. 23. March 2010
The benefits of expanding and refurbishing your practice

There are many benefits to refurbishing or relocating your dental practice, and although the decision to make such major physical changes is usually ...

ONTARIO, Canada: With over a billion people worldwide estimated to be affected, vitamin D deficiency has long been a topic of discussion among health ...

News Fri. 3. June 2022
The role of the orthodontist: Healthcare provider or salesperson?

The demand for gorgeous, perfect smiles has exploded in recent years. During the COVID-19 pandemic, the amount of time spent behind the screen, whether in ...

Every dentist is looking to grow his or her practice, and we are all looking to bring in as many new patients as we can. Numerous excellent articles have ...

News Wed. 15. July 2020
How to maximise the potential of multilayered zirconia

The use of pre-shaded zirconia with a highly translucent gradient brings more efficiency into the dental laboratory. Owing to the advanced properties of ...

News Mon. 23. August 2021
Designing for the environment—sustainability in plastic products

There are many different aspects to consider in guiding the individual to suitable oral hygiene products: the patient’s oral status, abilities, ...

Differences within material classes in CAD/CAM ceramics are not obvious at first glance. A knowledge of materials science is required in order to classify ...

My journey with ISQ. Why we all need it & How we can use it

Understanding primary and secondary stability - torque, ISQ, bone quality and what they can tell us

Welcome to IDEM Singapore 2022! Here, you will find that trade shows perform much better in Asia than in Europe. Although the International Dental Show ...

SEOUL, South Korea: Osstem Implant’s OneGuide, a unique surgical guide for guided surgery, does not require the production of separate guides for ...

share
save
advertisement
News Fri. 7. October 2022
Over 5,000 from across Asia Pacific expected to attend IDEM 2022

SINGAPORE: The International Dental Exhibition and Meeting (IDEM) has made a comeback this year for its 12th edition—the first physical event after the ...