Brazil aims for the big league

Brazil aims for the big league

According to the organizers, 25,000 people per day visited the CIOSP congress and exhibition, which is the largest dental event in Latin America. (Photograph: Dental Tribune Hispanic and Latin America)

SÃO PAULO, Brazil: Brazil has long been a dental industry powerhouse. The large number of research articles published annually and the great production of its dental industry have positioned this South American economic colossus at the forefront. The country has an estimated 290,000 dentists to a population of 207 million inhabitants—equivalent to 1.43 dentists per 1,000 inhabitants—more than double that of the U.S.

The figures leave no doubt about the scientific and industrial impact of Brazil. It is the second country in the world in terms of publication of dental research articles (only preceded by the U.S.), producing 84 percent of scientific articles in Latin America. Brazil exports dental products worth $87.3 million a year to 130 countries.

Rafael Cavalcante, market access coordinator at the Brazilian Medical Devices Manufacturers Association (ABIMO), explained that Brazil has a strong dental products industry and that dental care in the country is an established cultural practice among the population. In Latin America, Brazil is the industry leader, followed by Mexico, which is the first destination for products manufactured in Brazil, totaling $8.6 million a year. The main export products of the Brazilian dental industry are bioceramic cements for endodontics, brackets for orthodontics and dental implants, according to ABIMO.

During the 37th São Paulo International Dental Meeting (CIOSP), which was held from Jan. 30 to Feb. 2 and is considered to be the largest exhibition in Latin America, the Brazilian Health Devices organization, the export arm of ABIMO, organized visits to two major dental factories, which were as interesting as they were different.

Morelli, the largest manufacturer of orthodontic products in Latin America, has grown enormously, but is still a family business that maintains a compassionate and friendly relationship with its employees in its large premises in Sorocaba, 1 hour from São Paulo. The company is practically self-sufficient in the multiple production processes of its two manufacturing plants. In one of them, in addition to a large dining area for employees, there are several dental clinics that treat workers and their families, as well as a gym, and even a small museum presenting the company’s beginnings. The factory tour was guided by the company’s industrial director, Roger Morelli, a relative of the founder.

S.I.N. Implant, located in São Paulo, is currently the only Brazilian dental implant manufacturer, since Straumann acquired Neodent in 2015. Felipe Leonard, President of S.I.N. Implant, said that his company recently obtained approval from the U.S. Food and Drug Administration to distribute one of its implant systems—presented at the 2018 Greater New York Dental Meeting—in the U.S. At the upcoming International Dental Show (IDS) in Germany, the company is planning to make some important announcements. Leonard has extensive international business experience, having previously served as a director of Philip Morris in Brazil.

However, the familiar aspect of one company and the more international profile of the other are merely attitudes toward the market. Morelli, which has more than 650 workers, manufactures 2,000 products, of which it exports 30 percent, mainly to Latin American countries such as Colombia, Peru and Ecuador. In addition, the company focuses on manufacturing products that have shown proven success in the international market.

At a time when orthodontic appliances have become fashionable among many young people, Roger Morelli stated that his company’s production has increased on average by 10 percent per year since 2013. “They have a good image in the Brazilian market and are accessible thanks to their low cost,” he said, adding that Morelli manufactures both metal and ceramic brackets. Owing to the company’s extensive knowledge of the ceramic manufacturing process, Morelli said that it is looking into the possibility of producing zirconia implants in the near future.

After a tour of the manufacturing plant of S.I.N. Implant, Leonard explained that the company exports to 15 countries, but that it has a small market share, since until recently it had focused on the Brazilian national market. He described the advanced implant manufacturing technology the company uses and said that the time has come to communicate its advantages to international oral implantologists.

Although there are more than 1,000 international implant manufacturers, Leonard is convinced that S.I.N. has a good product and it will succeed once it has entered the market. “And we are a very flexible company. One of our qualities is to offer a good service to dentists, something that, as with everything nowadays, is highly appreciated,” he said.

Leonard reported that the export division was the fastest growing part of the company in 2018, with 10 percent growth, and that it is expected to double international sales results yearly over the next few years. He said that S.I.N. employs key opinion leaders, which he called “ambassadors” of S.I.N. Implant, to help explain the benefits of its products at the clinical level. More than the price, he said, dentists in the U.S. and Europe want to see clinical studies that support results, and he is confident in the scientific support that backs the quality of S.I.N.’s implants.

In addition to opinion leaders, the second pillar of Leonard’s strategy is organizing training courses, both at universities and at the private level. “The placement of an implant is a complicated surgical procedure in which many things can go wrong, and when a dentist learns to place implants with a given system, he or she is usually loyal to the brand, especially if his or her needs are complemented with good quality and good service,” Leonard said.

Leonard also referred to the different implant systems that are currently on the market and specifically mentioned the requirement of compatibility between components demanded by European dentists. In this regard, he praised the work being done by the research and development department of the company with that objective in mind.

Leonard announced that S.I.N. Implant will for the first time have its own booth at IDS—the largest fair for dental products in the world—and that, depending on the approval process of the European community, it will present new surgical solutions at the event and bring more than 100 guests to Cologne.

The stand of Orthometric, a Brazilian company that specializes in orthodontic products.
View of the S.I.N. Implant factory in São Paulo.
Felipe Leonard, President of S.I.N. Implant, the second largest implant manufacturer in Brazil.
Paulo Henrique Fraccaro, superintendent of ABIMO, offered a perspective on the export projects of the Brazilian dental industry.
A transparent dental chair by Olsen, showing the high-quality parts used to build the company’s chairs.
Roger Morelli, industrial director of Morelli, showing one of the 2,000 orthodontic products manufactured by his company.
Aerial view of one of the two plants of Morelli, the largest manufacturer of orthodontic products in Latin America.
Entrance to the booth of Maquira, a company that manufactures restorative materials.
The booth of KG Sorensen, which manufactures high-quality dental burs.
The booth of implant manufacturer Implacil De Bortoli at CIOSP 2019.
Dr. Wilson Chediek (middle), President of the Associação Paulista de Cirurgiões-Dentistas [São Paulo Association of Dental Surgeons], which organizes the CIOSP congress, with the presidents of various dental associations of Latin American countries. 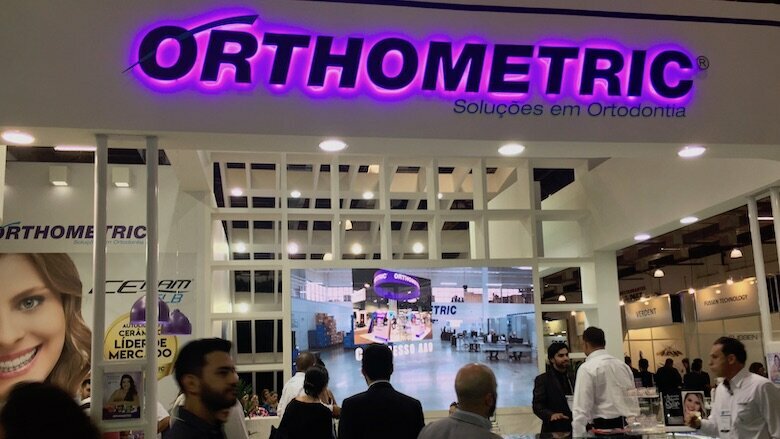 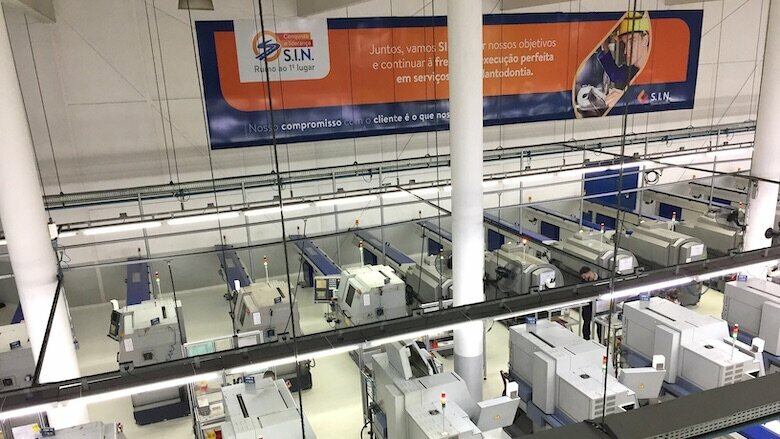 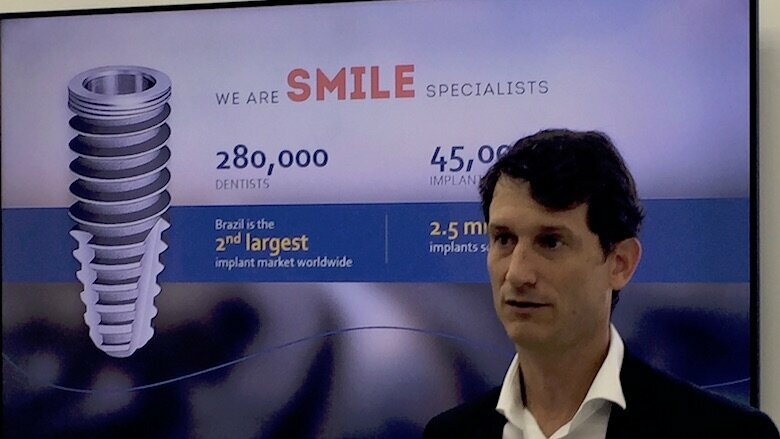 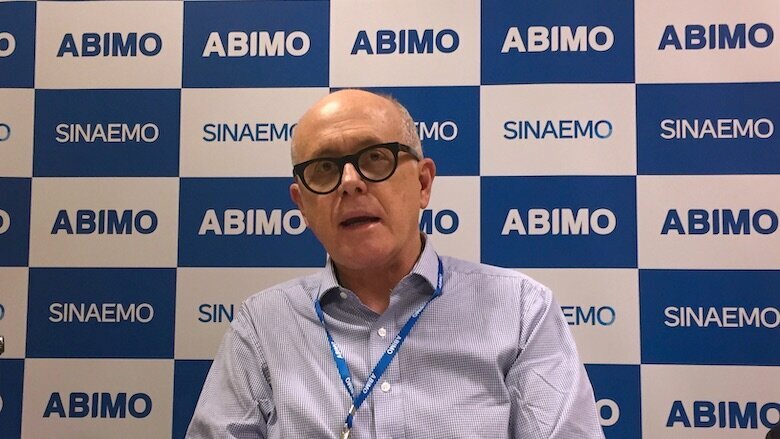 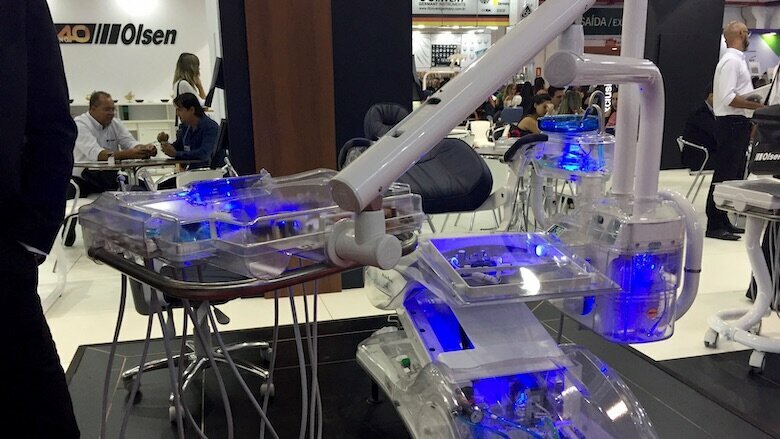 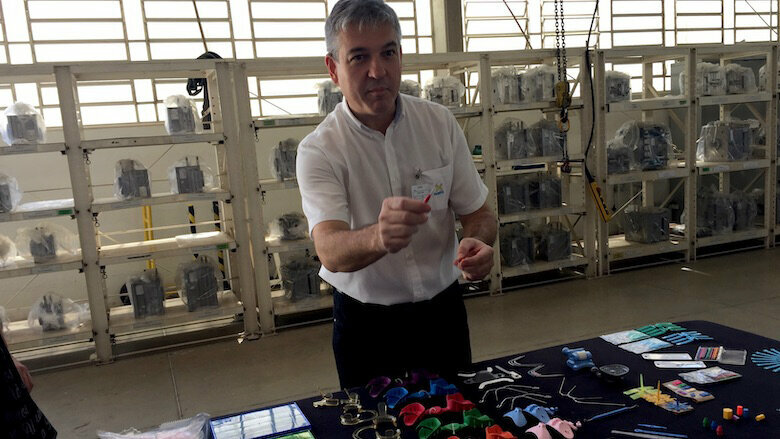 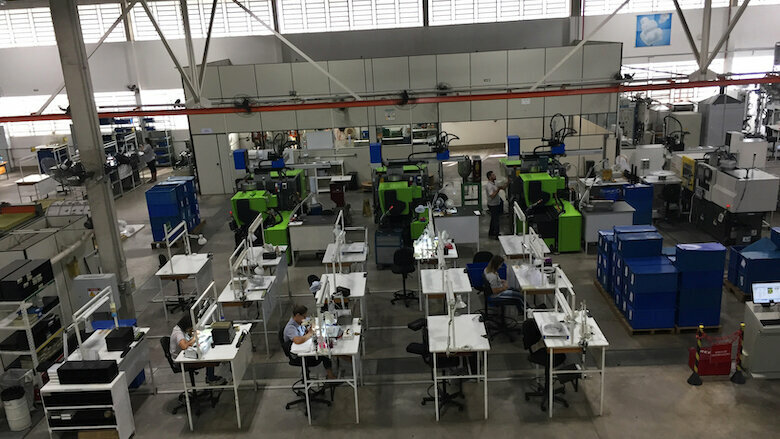 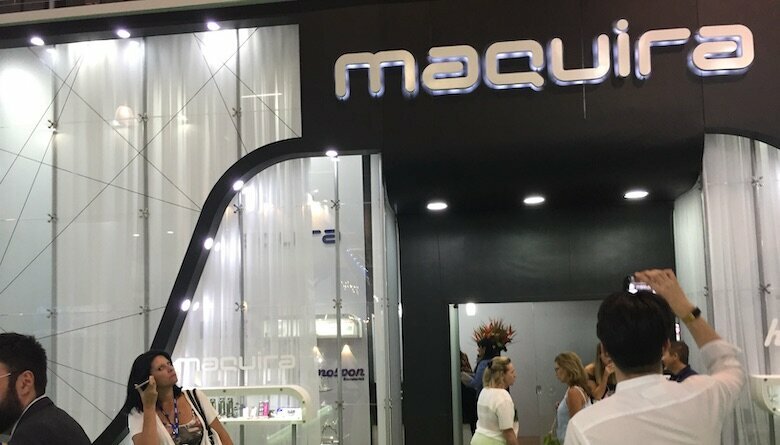 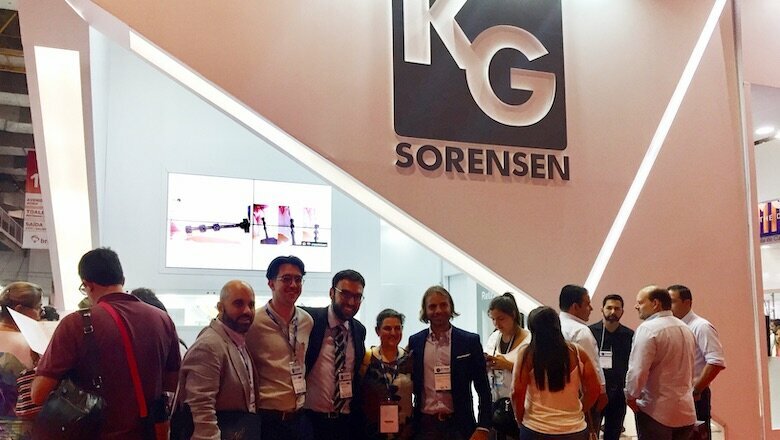 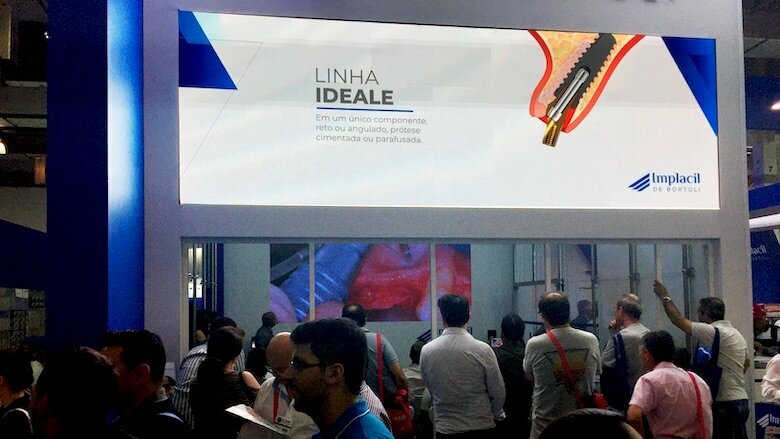 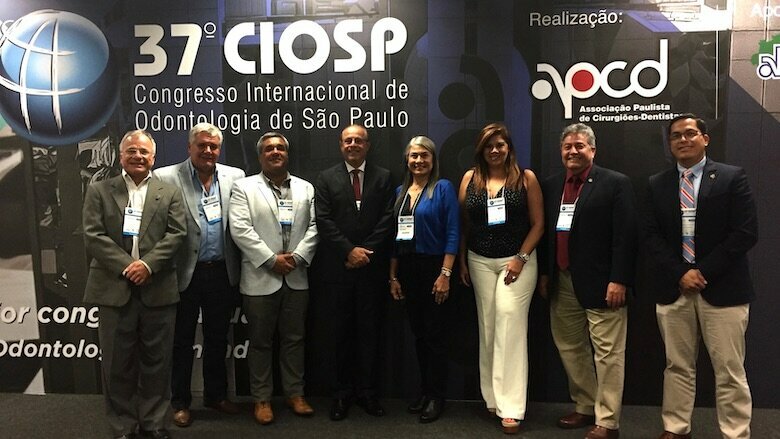 DÜSSELDORF, Germany: On 24 and 25 September, another successful CEREC Day was hosted in Düsseldorf. The event, which has become a prominent symposium for ...

News Tue. 21. September 2021
“The big plus of the hybrid event is the digital reach well beyond the trade fair period”

COLOGNE, Germany: Losses in the millions, cancellations of events and a completely new strategy—these are just a few of the hurdles and achievements ...

ROOTS SUMMIT 2022 has been an event of deep learning, offering the latest takes on methodology and technology in endodontics. Dental Tribune ...

MALMÖ, Sweden: Sustainability at TePe means ensuring environmental, economic and social well-being for today and tomorrow, according to the company. This ...

HYDERABAD, India: The Indian dental care services market is estimated to experience a double-digit growth rate, reaching up to US$2.2 billion (147 bn. ...

COLOGNE, Germany: The development of dental practices is in a much better position than one and a half years ago, and the COVID-19 pandemic is even showing ...

COLOGNE, Germany: The research by Spanish company Graphenano Dental on the reinforcement of polymer matrices has made it a pioneer of the use of graphene ...

From 22 to 25 September, Cologne will once again become the place to be for dental professionals when the 39th edition of IDS takes place. Mark ...

FLORIANÓPOLIS, Brazil: Between 27 and 30 April, more than 1,200 dental professionals took part in the many engaging activities and learning ...

News Tue. 21. September 2021
Interview: “Our booth will be the meeting point for the exocad community”

In this interview, Novica Savic, chief commercial officer at exocad, explains why the company’s commitment to IDS remains unchanged and what visitors can ...

GBT and new concepts in cariology

An update on irrigation in Endodontics

MALMÖ, Sweden: On the occasion of EuroPerio10, which was held in Copenhagen in Denmark from 15 to 18 June, TePe held a party at its headquarters in ...

SEOUL, South Korea: A review by researchers from Sungkyunkwan University in South Korea has suggested that certain types of nanoparticles could be the ...