Cost-savings for dental tourists in Hungary are increasing

A 2018 survey of 2,550 patients who travelled to Hungary for dental treatment found that the average patient had saved €7,240 on their treatment, even after deducting travel and accommodation costs. (Image: FirstMed Services)
Back to news
By Jeremy Booth, DTI
December 03, 2019

BUDAPEST, Hungary: For thousands of Europeans, the cost of dental treatment in their home countries is enough to send them packing. Hungary is a major destination for those seeking dental treatment abroad, and recent figures show that the average patient who travels to the country for treatment receives it for €7,240 less than he or she would have at home, even after subtracting the cost of travel and accommodation.

TripAdvisor seems an unlikely place to ask for recommendations for a dental practice. For many would-be dental tourists, however, online travel forums like TripAdvisor are where their treatment journey begins. According to discussions on the forum, the key concerns of patients heading abroad are the accessibility and appeal of the destination, safety, the quality of the treatment and the technology on offer at dental clinics. Of course, cost is a major motivator.

According to a survey conducted by FirstMed Services, which has offered dental treatment in Hungary to visitors from Germany, Austria, Switzerland and Italy for over 20 years, the amount of money saved by patients travelling to the country is increasing. In November, the company released the results of its third survey of patients who had travelled to Hungary from these four countries for dental treatment since 2009. Respondents in 2010 saved an average of €6,301 after travel and accommodation costs. A follow-up survey in 2013 showed that the average cost-saving on treatment had increased to €7,128. The latest survey, to which 2,550 patients responded, put the average cost-saving at €7,240.

Respondents in 2018 paid an average of €12,897 for their treatment, which FirstMed says is about half of what they would have paid in their home countries. The company says that the more complex the treatment, the higher the savings, and so a growing demand for complex procedures, such as having dental implants placed, is driving an increase in the average cost-saving per patient.

Which treatments are in demand for dental tourists to Hungary?

Eszter Jopp, founder and CEO of FirstMed, told Dental Tribune International that the vast majority of patients who responded to the latest survey—77%—received crowns or fixed partial dentures in Hungary. According to Jopp, 66% of the 2018 respondents said that they had undergone dental implant treatment in the country, and this represented an increase of 11 percentage points on implant procedures reported in the 2010 and 2013 results.

Further trends identified by the survey are indicative of a maturing of the dental tourism market in Hungary. FirstMed has a network of partner clinics in the countries where its customers normally reside, and the company utilises these practices for planning treatment and for carrying out certain procedures. 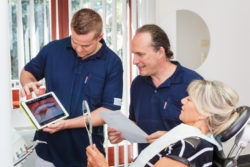 The quality of treatment on offer and the technology on hand in the practice are important criteria for dental tourists. (Image: FirstMed Services)

The number of dental tourists who had root canal therapy done in Hungary, for example, increased by 10% between the first and second survey results; in 2013, 21% of the respondents said that they had undergone root canal therapy, but this figure decreased to 10% in the 2018 results. “The reason for this decrease in root canal therapy is that we are having these treatments performed as part of the treatment planning preparations undertaken together with our partner dentists in Germany and Switzerland,” Jopp explained. “This means that some of our patients can often save themselves the trip to Hungary.” The number of foreign patients receiving professional tooth cleaning in Hungary also decreased for the same reason. Patients received tooth cleaning at partner clinics in their countries of residence before they travelled to Hungary for further care, and 32% of the respondents mentioned professional tooth cleaning as being part of the treatment they received once in the country.

What else draws dental tourists to Hungary?

Jopp said that the main reason behind interest in travelling to Hungary for dental treatment is the prospect of saving money on treatment. “Despite travel costs, the cost-savings are between 30% and 70%,” she said, “but another argument is the accessibility of the country: a resounding 82% of respondents rated this as being ‘very good’ or ‘good’.”

Jopp added that the quality and ease of treatment on offer in Hungary are further deciding factors. The latest survey results showed that 28% of the respondents thought that the treatment that they had received in Hungary was of a higher quality than that which was on offer at their local dental practices. The quick availability of appointments was an important part of their decision-making process, according to 23% of the respondents.

Around 33% of the respondents in 2018 had had dental work done in countries other than Hungary and their countries of residence, while 66% had decided on Hungary from the very beginning. “The main reason for this,” Jopp stated, “is that Hungary has been a European leader in the field of dentistry for many years. The universities in Hungary are very popular among students from abroad because the training is regarded as first class. More and more German high school graduates are deciding to study dentistry in Hungary”. 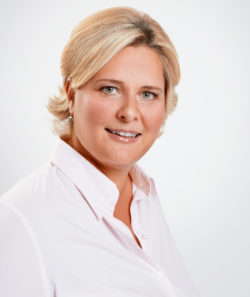 As CEO of FirstMed, Eszter Jopp has been offering treatment in Hungary for over 20 years. (Image: FirstMed Services)

Despite the increasing cost-savings, the number of patients who decide on having dental treatment done overseas strictly for financial reasons seems to have decreased. The survey asked respondents whether their decision to seek treatment outside their home countries—not specifically in Hungary—was based on lower cost; in 2018, 78% fully agreed, compared with 85% in 2013. In 2018, 28% fully agreed that the quality of treatment had guided their decision; this was up 12 percentage points from 16% in 2013. A larger number of respondents fully agreed that combining dental treatment with a holiday was behind their decision: 24% said so in the 2018 survey, while just 16% had said so in 2013.

Hungary has emerged as the informal capital of dental tourism in Europe, and the Internet and social media are playing a major role.

Medical tourism is booming: the healthcare research company Market Research Future estimates that the worldwide market for medical tourism will grow by more than 21% between 2019 and 2023. Hungary has emerged as the informal capital of dental tourism in Europe, and the Internet and social media are playing a major role. Jopp said that 30% of all patients that employ FirstMed’s website have either received referrals through word of mouth or read recommendations on what have become highly influential online forums. But Hungary is facing increasing competition from eastern European and Balkan states in the dental and wider medical tourism sector.

Poland and Slovenia are already popular destinations for those seeking dental treatment abroad, and the Croatian government is looking to capitalise on long waiting times and high treatment costs in other countries to boost its already lucrative medical tourism sector.

Reuters reported in November that officials in Croatia estimated that receiving healthcare was the main reason for visiting the country for around 10% of all tourists. On average, these healthcare tourists spend around €300 per day during their stay—up to four times more than other tourists do. According to the report, the city of Rijeka and towns on Croatia’s northern Istrian peninsula are attracting a growing number of patients from Italy and the UK by offering discount dental treatment.

Dr Daniel Baketić, who owns a dental clinic in Croatia’s capital, Zagreb, told Reuters that around 20% of his patients come from abroad and that social media was proving an effective tool for his team in attracting patients from the UK. He said further that “the dental services in Croatia can be up to 60–70% cheaper than in western Europe and a patient can save even €10,000–€15,000”.

As patients consider the costs of dental treatment at home, the prospect of recovering from surgery while enjoying sea breezes on the Adriatic coast, or while getting lost in the crowds in Budapest, only adds to the appeal of going abroad.

The future is now: Revolutionising dentistry with digital dentures

COPENHAGEN, Denmark: Whereas it was previously impossible to imagine a dental laboratory adopting a fully digital workflow, digital dentistry has already redefined the previously established dental procedures and empowered dental professionals and clinicians to take the leap and immerse themselves in a digital future. The benefits of dental technology can be clearly seen in the introduction of digital dentures—not only has this facilitated denturists’ and dental clinicians’ work by offering more flexibility and efficiency, but it has also improved the patient experience and enabled patients to become more involved in their own care.

ATLANTA, U.S.: Although most social media feeds have returned to other topics, protests in light of the Black Lives Matter movement are still very much a reality for many Americans—and so is police brutality. An activist who was attacked by a police officer during a demonstration in Chicago has now received a dental makeover by celebrity dentist Dr. Heavenly Kimes.

Interview: “I will be examining the effectiveness of school-based caries prevention programs”

School-based oral health programs are vital to ensuring that the oral health of a country’s youth population remains of a good standard. However, as with any system, it is often a good idea to investigate the finer details in order to check whether any improvements can be made. In a recent interview with Dental Tribune International, Dr. Shulamite Huang, a health economist from the Department of Epidemiology and Health Promotion at the New York University College of Dentistry, spoke about her current study on the effectiveness of school-based cavity prevention programs.

We live in a rapidly changing world where continuing education is more important than ever—not only to keep you abreast of new developments and to ensure that your patients get the best possible care but also to help you grow as a human being.