Back to news International
By Kasper Mussche, DTI
March 29, 2019

Our teeth are constantly exposed to mechanical and chemical wear, and with age, our oral immune system becomes less effective at fighting pathogenic bacteria. Needless to say, the resulting enamel loss and gingival recession lead to sensitivity, and the teeth lose their natural colour. Approaching dentistry with the mind of a chemist, owner of Andjana Dr Andreas Teichmann is the inventor of Dentcoat, an ingenious prophylactic technology that remineralises the teeth, protects them against biofilm build-up and helps to prevent periodontitis.

Dentcoat is a liquid bioglass that cleverly takes advantage of molecules’ ability to self-assemble, and covers dentine and enamel with a protective crystalline layer for a period of up to 12 months. The fluid contains two key ingredients: pure alcohol and a silicon dioxide complex. “Silicon as an element is nothing alien to the body,” Teichmann explained: “After iron and zinc, it is actually the third most common element in the body, and it plays a major role in the development of bones, cartilage and connective tissue. With Dentcoat, the SiO2 crystals that are formed in the alcohol solution bond firmly to the enamel and dentine apatite grid and form an extremely smooth bio-repulsive surface.”

Once applied, Dentcoat’s effects are broad and immediate. Because microscopic defects in the teeth’s enamel are sealed, the formation of biofilm and the pathogenic consequences of plaque formation are greatly reduced. “Microorganisms won’t be able to attach themselves to the teeth easily anymore,” explained Teichmann. “As a result, bacteria and plaque removal becomes much easier. Our way of preventing the development of oral disease is by remineralising the tooth’s surface. The anti-adhesive Dentcoat coating reduces plaque accumulation by up to 90 per cent and inhibits acid erosion and staining.”

Sealing the enamel defects also leads to reduced sensitivity and prolongs the teeth’s health. Because the structure of the enamel is optimised with each treatment, plaque and calculus build-up are increasingly reduced over time and every subsequent treatment will require less Dentcoat to be applied to the teeth’s surfaces. Lastly, Dentcoat has a welcome side effect: the teeth brighten and regain their natural colour and gloss. 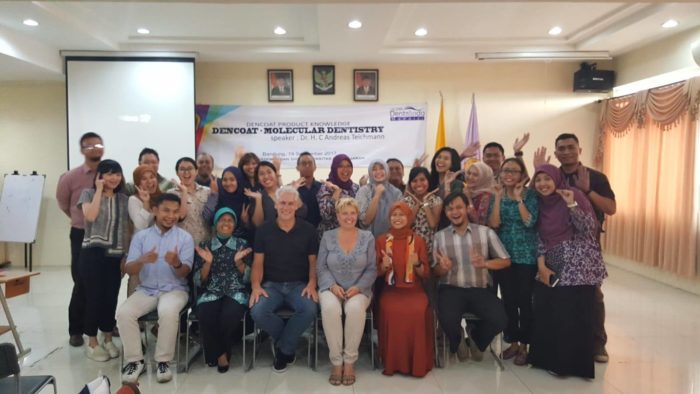 Paving the way in Asia

Developing and successfully introducing his revolutionary technology in various countries has not been easy for Teichmann, and in a way, it is still a work in progress. With Andjana’s headquarters in Singapore, Teichmann achieved Dentcoat’s first successes in South East Asia, a long way from his native Germany.

“Although 80 per cent of the region’s population is suffering from periodontitis, South East Asia’s dentistry is still very much focused on restoration,” said Teichmann. “As such, I have given a lot of lectures at universities and congresses all over the region, in Malaysia, Vietnam, Singapore, and so on. I have been collaborating mainly with the University of Indonesia in Jakarta and Taipei in Taiwan for testing and approving the new technologies of Andjana. I am a guest lecturer in their periodontics and implantology programme, and it is here that a lot of our biofilm and inflammation management studies took place.”

The first successful Dentcoat treatment took place in 2009, and the product was launched first in Asia in 2011. This year has seen the ten-year follow-up of the first patients, and the results are impressive: none of the patients treated with Dentcoat have developed caries over the past decade. Dentcoat was introduced in Germany only five years ago, and 25 other countries have followed.

“We haven’t taken the easy road with Dentcoat, but we really need to pursue durable, holistic prevention,” Teichmann concluded. “Bacteriological problems in the mouth can be taken care of easily with Dentcoat, but it is also an ideal complementary treatment in patients with systemic diseases, such as immune problems, cancer, diabetes or cardiovascular disease. The oral metabolism influences the whole body, and the patient’s well-being should be our main concern. As I said in Malaysia a couple of years ago: the century of drill and fill is over.”

Prevention of periodontal disease could save billions

BRUSSELS, Belgium: The European Federation of Periodontology (EFP) recently commissioned the Economist Intelligence Unit (EIU), a provider of forecasting and advisory services, to perform an analysis on the financial and human cost of periodontal disease in six western European countries. Overall, the results show that preventing new cases of periodontitis by eliminating gingivitis would save up to €101 billion over a ten-year period.

NEW YORK, U.S.: Older adults with more harmful than healthy bacteria in their periodontal tissue are more likely to have evidence for amyloid beta— a key biomarker for Alzheimer’s disease—in their cerebrospinal fluid (CSF), according to new research from NYU College of Dentistry and Weill Cornell Medicine. However, this imbalance in oral bacteria was not associated with another Alzheimer’s biomarker called tau.

As a dental therapist and trained yoga teacher, Victoria Wilson certainly understands the holistic nature of oral health and overall well-being. In 2019, she launched the Smile Revolution podcast, where she has talked to a range of dental professionals about their career ups and downs. Wilson spoke to Dental Tribune International (DTI) about how Smile Revolution is fulfilling its mission of promoting oral health and how the podcast has been received so far.