In symptomatic periapical periodontitis, sufficient preparation and disinfection of the root canal is usually the only way to eliminate pain. Particularly in difficult initial situations, a reliable and efficient file system is therefore needed to provide a sufficient restoration. Using a current patient case as an example, I demonstrate in this article how a retreatment can be achieved quickly and confidently despite the presence of ledges and a carrier-based root canal filling.

Endodontic retreatment per se usually involves additional difficulties in preparation when compared with initial treatment. Preparation-related ledges or perforations can be present, as can untreated canal sections and overlooked canals. Elderly patients sometimes present additional challenges: a smaller mouth opening can limit the working field and the field of vision. Narrowed root canals are also increasingly caused by the formation of secondary and tertiary dentine. In these cases, it is even more important to have a reliable file system which allows efficient removal of the obturation materials requiring revision for subsequent disinfection and obturation of the root canal system. In the case at hand, new types of nickel–titanium (NiTi) files were used together with a fully automatic endodontic motor.

An 87-year-old female patient was referred to our clinic with pain in the third quadrant. The clinical and radiographic examination (using single-image radiography and CBCT) confirmed the suspicion of symptomatic periapical periodontitis at tooth #36 (Fig. 1). The preoperative single image suggested that a carrier-based root canal filling material had been used; furthermore, two ledges were visible in the mesial canal system. In addition, a second distal canal had to be assumed. 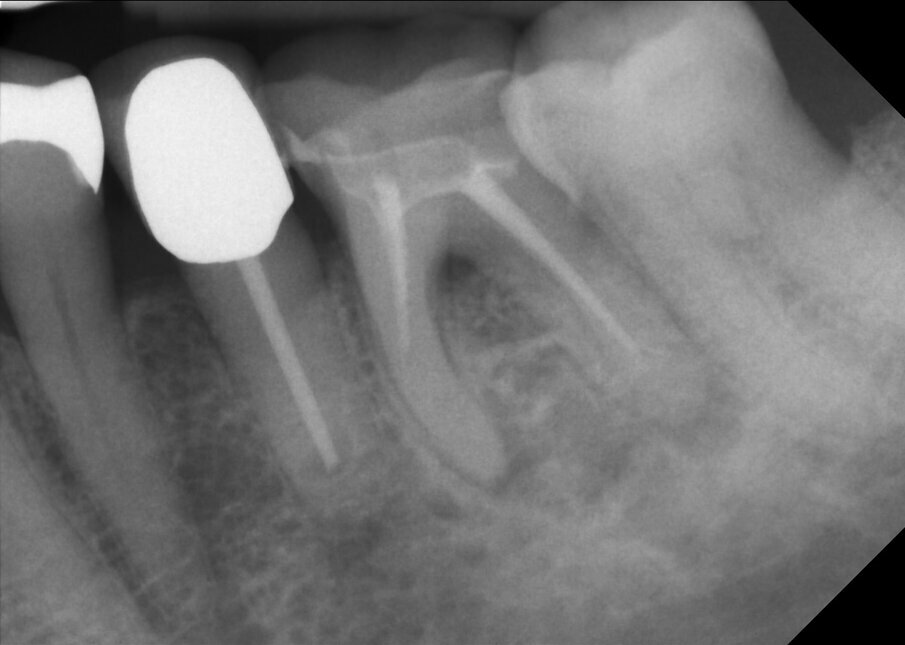 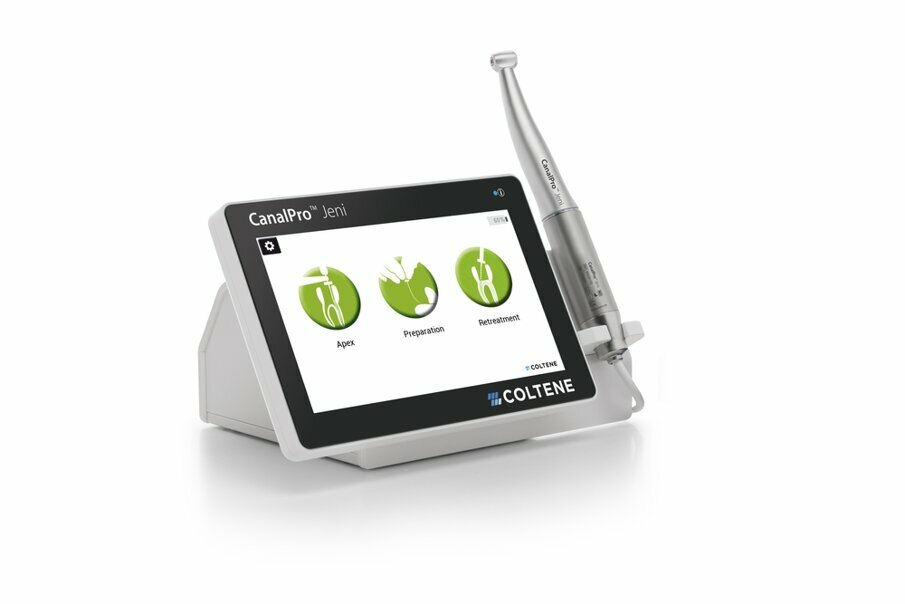 The CanalPro Jeni endodontic motor (COLTENE) was used for the actual preparation. Jeni is a digital endodontic assistance system which assists the clinician in navigating through the root canal (Fig. 2). The device was named after its Italian inventor, Dr Eugenio “Jeni” Pedullà. Complex algorithms control the variable movements of the respective NiTi files used at millisecond intervals. In this process, the endodontic motor continuously adapts rotary motion, speed and torque to the prevailing conditions in the root canal. If one of COLTENE’s file systems is selected on the touch screen, this allows working in the fully automatic Jeni mode. Rotational movements are finely adjusted in this case, and an acoustic signal warns the dentist when it is advisable to change the file owing to the resistance in the canal. Thus, Jeni currently “knows” the parameters and instrument characteristics of the HyFlex CM and EDM series as well as the MicroMega One Curve, 2Shape and, very importantly in our case, the Remover files manufactured by the corporate group.

Mechanical removal of the plastic carriers

After applying the dental dam and preparing the access cavity, the next step was to remove the existing obturation material (Figs. 3 & 4). A high-speed rotary HyFlex Remover was used for this purpose (Fig. 5). The revision file efficiently removed the materials from the root canal so that additional solvent could be dispensed with during treatment. Unlike in other cases, the plastic carriers in this case were not extracted with an aid, but were machined (see video above). The non-cutting tip of the retreatment file protects the surrounding tooth structure during this procedure, which makes handling even easier. 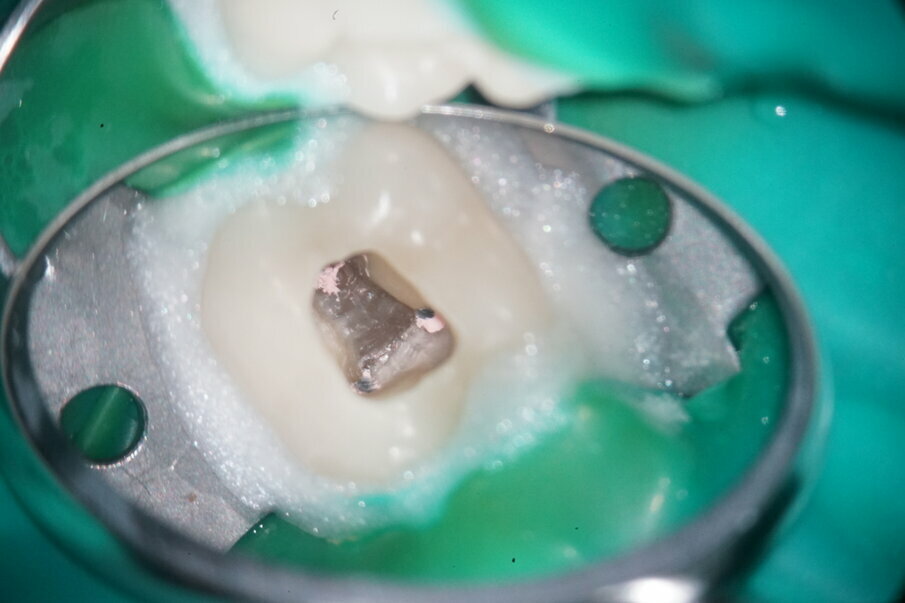 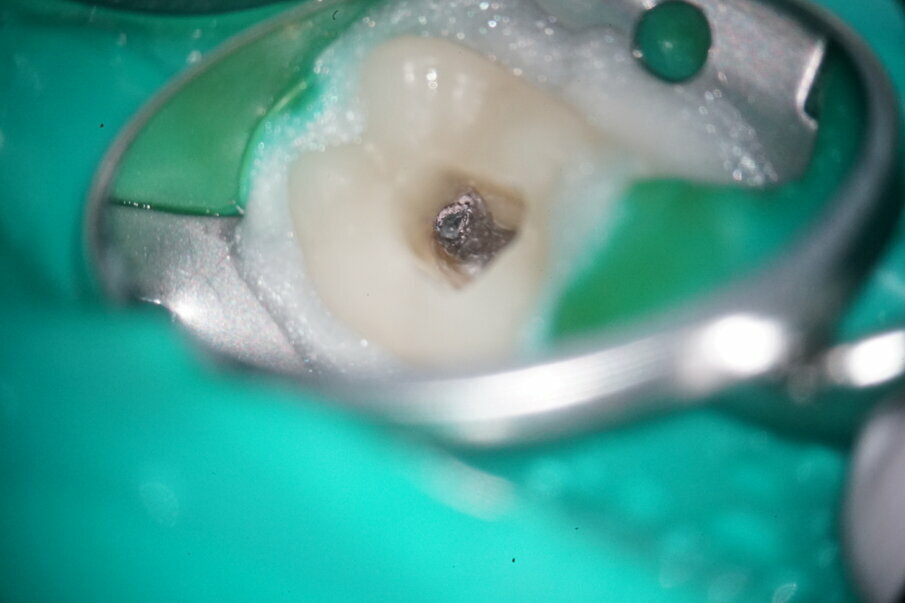 Consistent progression to the apical aspect

The corresponding NiTi files were then used for renewed preparation of the root canals. Normally, in the presence of ledges, I prepare a glide path with manual instruments as a standard procedure. In this case, the use of prebent rotary instruments eliminated the need to create a manual glide path. In this case, the mesial ledges were bypassed by alternating between a 15/.03 HyFlex EDM and a 10/.05 HyFlex EDM. At the same time, the non-instrumented canal sections were developed. The second distal canal, which had not been treated during initial treatment, was instrumented with these two files in the same manner as the preparation of the mesial canals. Here too, the advance creation of a manual glide path could be dispensed with.

The complex file control of the fully automatic endodontic motor imparted a feeling of reassurance during every treatment step, even in the canal which had not been scouted previously. The motor automatically adjusts the rotation of the files in the canal. This way, light pressure is applied steadily from coronal to apical. At first, one needs to overcome this otherwise slightly unfamiliar working movement, as traditionally one learns to trust one’s own tactile feedback with dabbing hand movements when using rotary instruments. However, automatic adjustment of the file movement by the motor makes preparation even faster and safer than is already the case with modern NiTi file systems.

After preparation of the glide path, the following HyFlex EDM sequence was used: first the 20/.05 instrument, then the 25/~ HyFlex EDM OneFile and finally the 40/.04 file in all canals (Figs. 7–10). An acoustic signal from the endodontic motor indicated when rinsing should ideally be performed to remove the abraded debris from the canal. Obturation was performed with a bioceramic sealer (BioRoot RCS, Septodont) using the single-cone technique (Figs. 11–13). The contrast image with the master points and the final radiographic check after obturation demonstrated preservation of the canal anatomy and maintenance of the original path of the canal (Figs. 14–16). 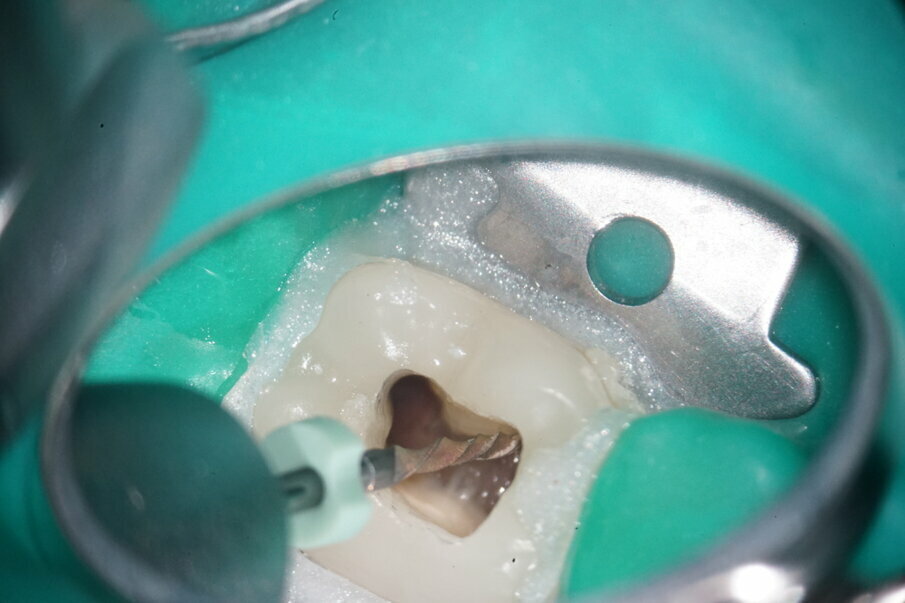 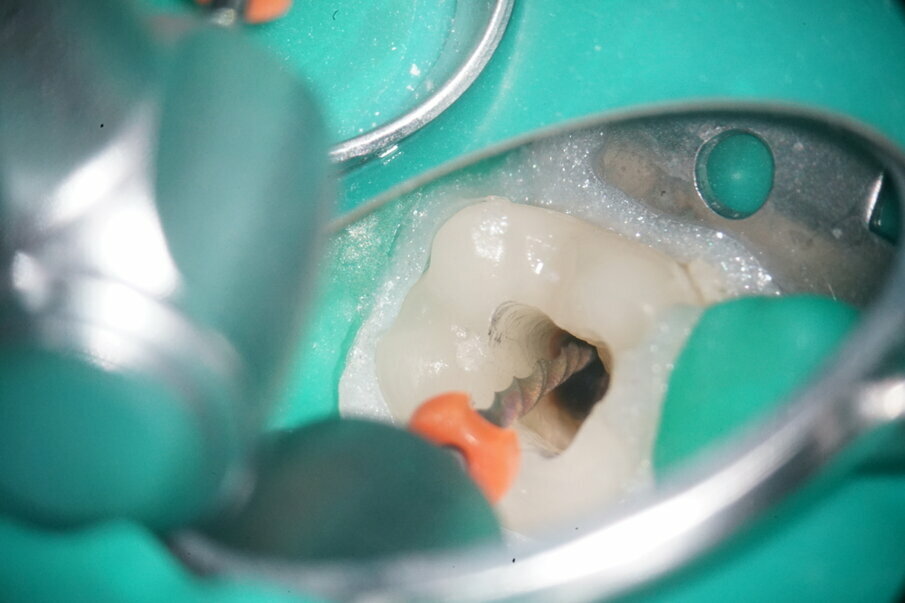 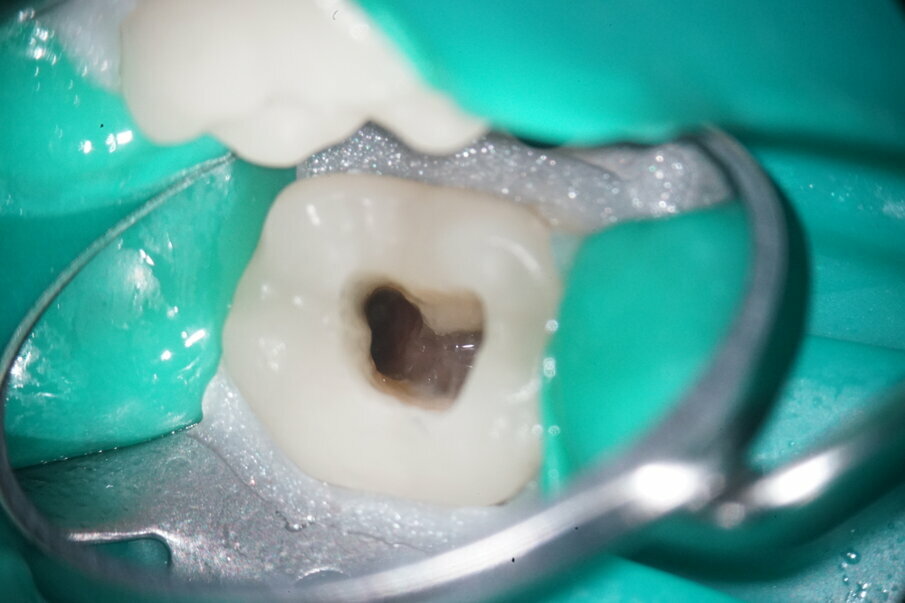 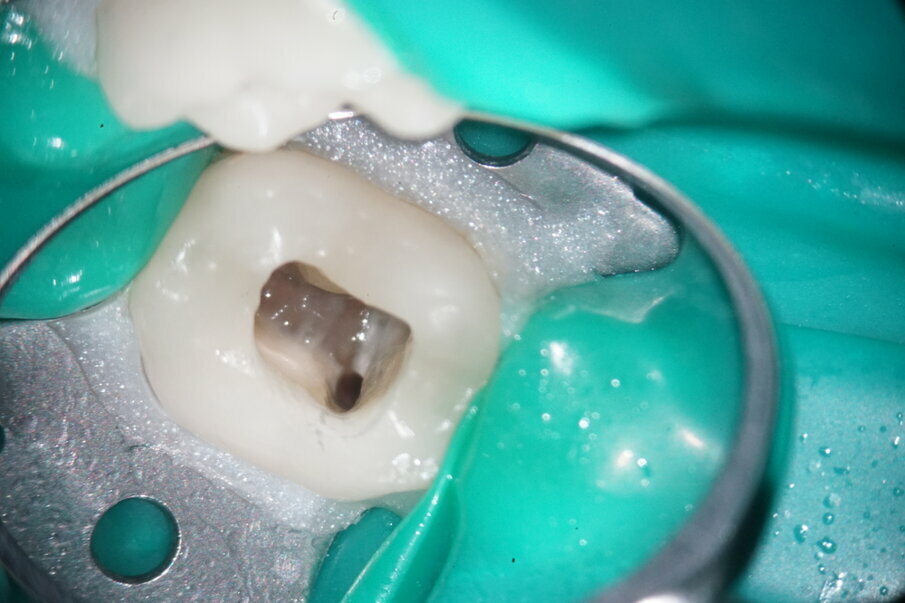 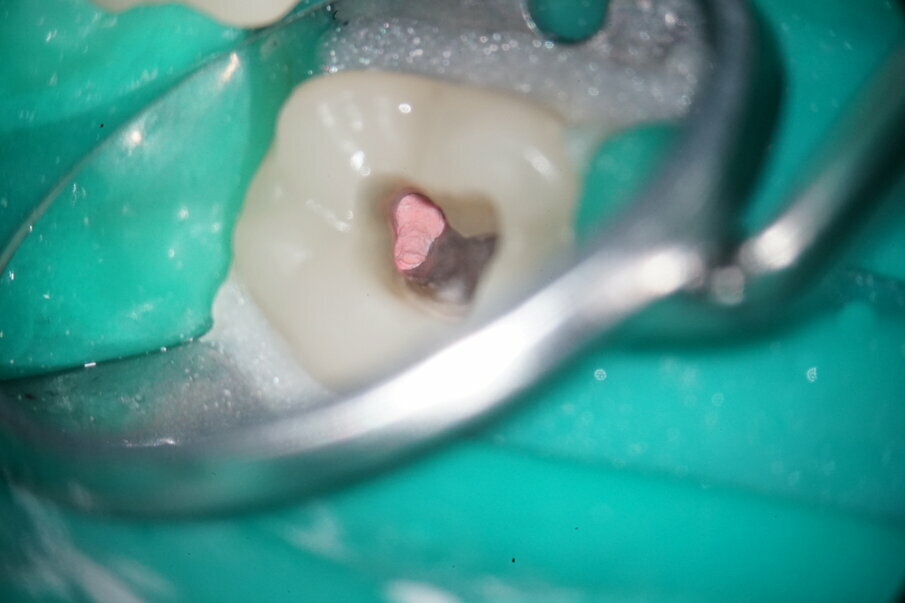 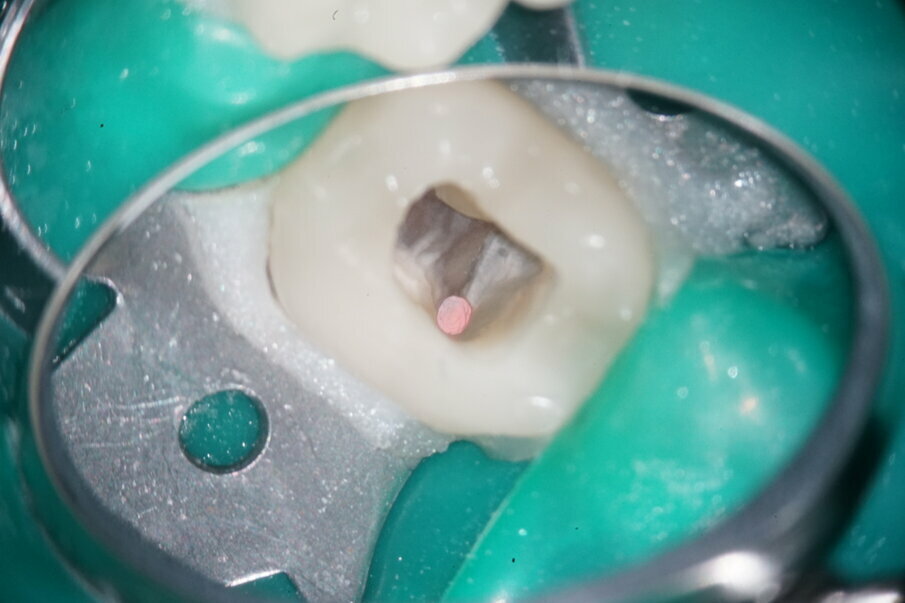 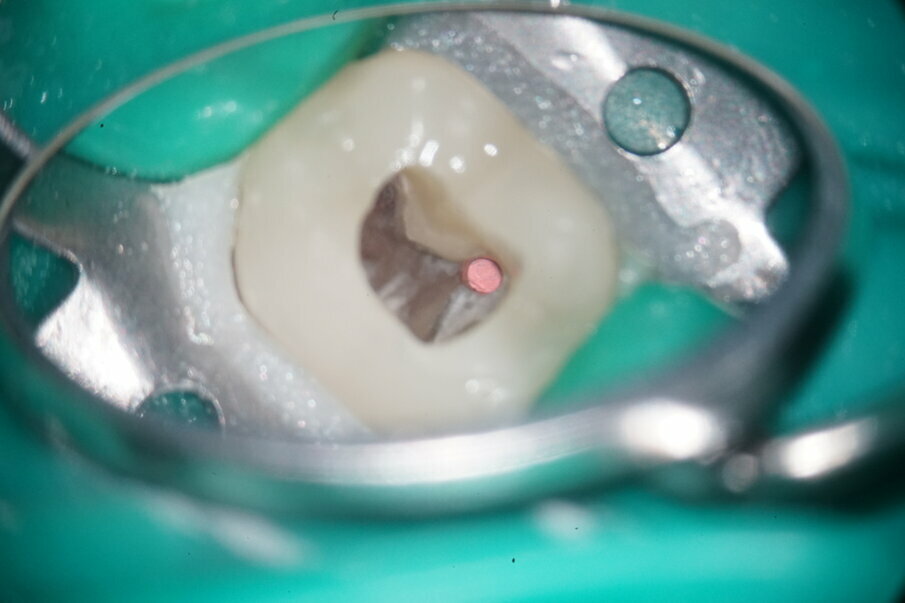 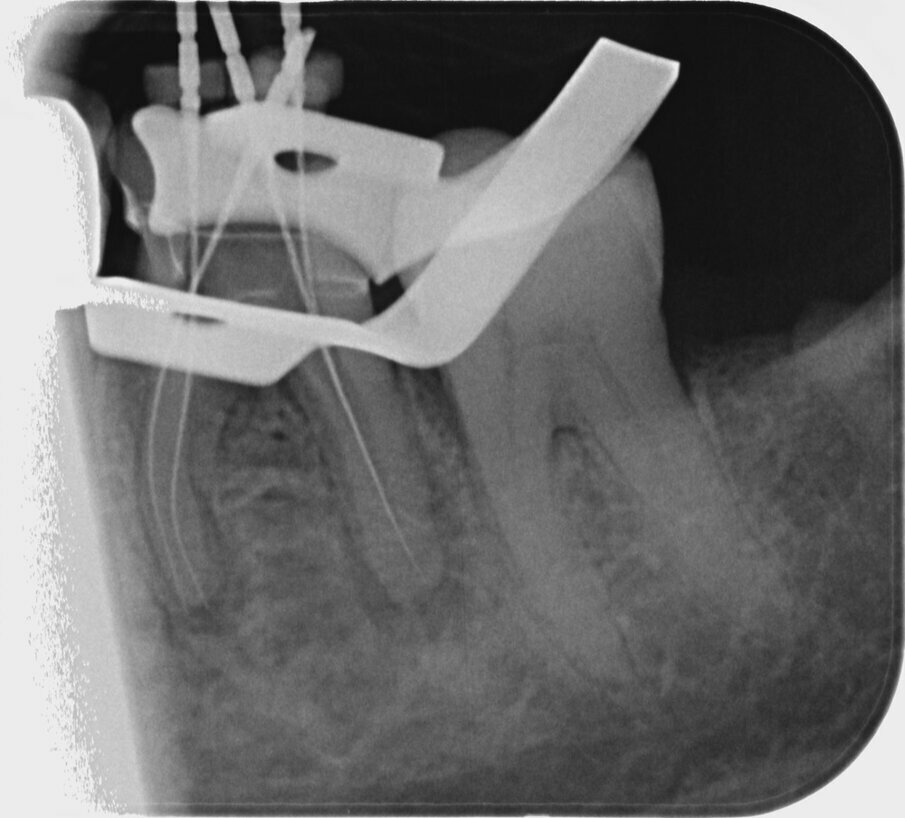 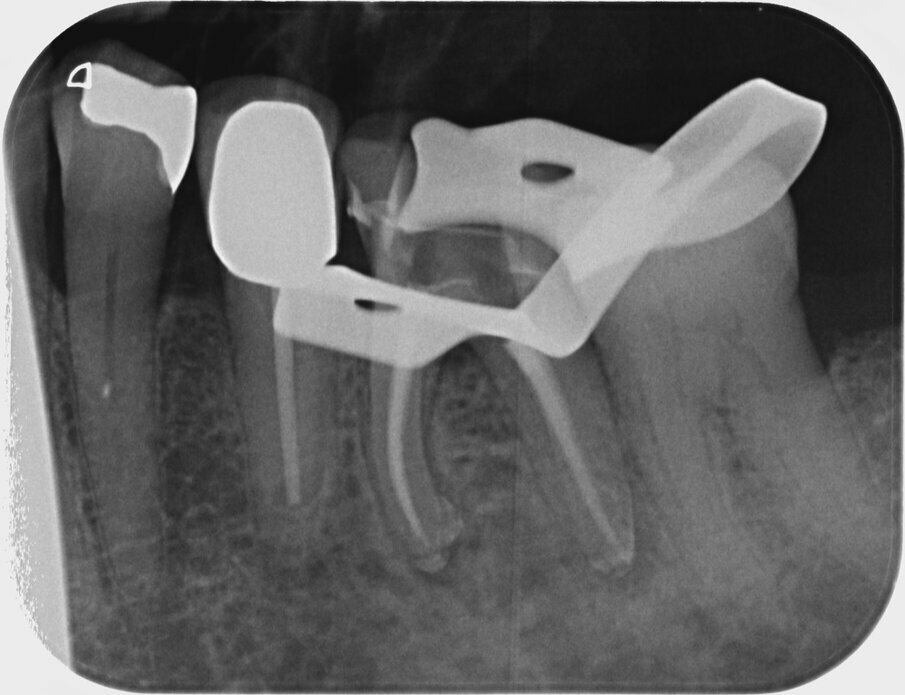 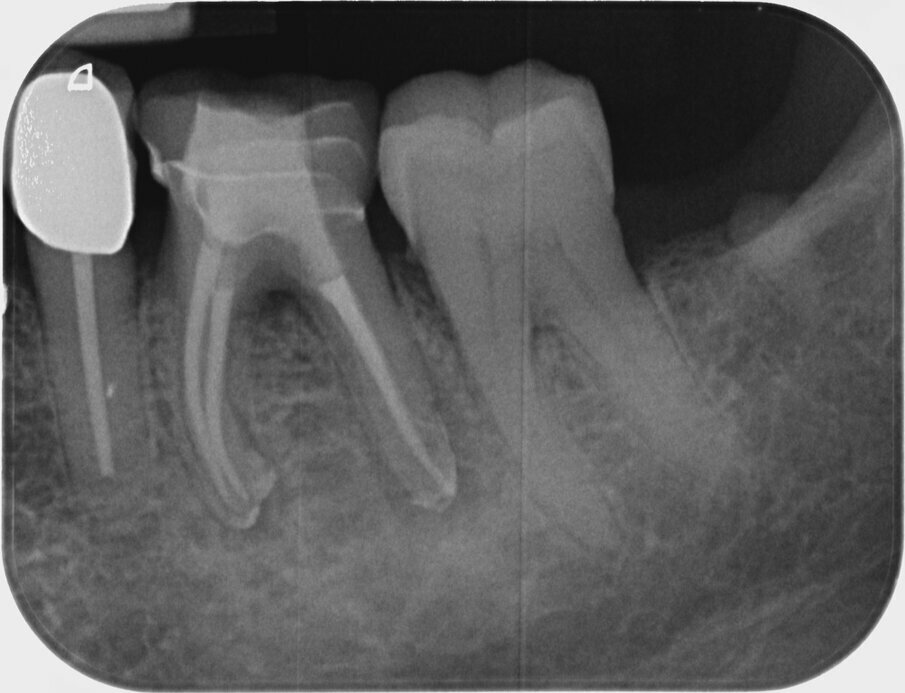 Iatrogenic damage and narrowed canals often make revisions a journey through difficult terrain. The use of suitable NiTi special files allows rapid mechanical removal of obturation material as well as the creation of a natural canal path. The fully automatic endodontic motor monitors file movement and ensures efficient preparation, and this can lead to rapid pain reduction, especially in symptomatic periapical periodontitis.

The patient reported on in this article was referred to my dental office by his general dental practitioner. There was a large cavity and symptoms of ...

NAGOYA, Japan: With the aim of clarifying the relationship between panoramic radiographic appearance and longitudinal CBCT classification of root ...

News Wed. 5. August 2015
Diagnosis and management of a rare case of a maxillary second molar with two palatal roots - Supported by conventional radiography and CBCT

Besides adequate knowledge of root canal morphology in general, it is of utmost importance to evaluate each individual case for aberrant anatomy and to ...

HONG KONG, China: Moisture is one of the greatest challenges for dental fillings, as it reduces adhesive performance. To overcome this obstacle, ...

LONDON, UK: It has been established that patients with a phobia of dentistry may often delay visiting the dentist or avoid it altogether. It comes as ...

The aim of this article is to highlight the possibility of the successful outcome of non-surgical retreatment involving disassembly of a cast restoration...

News Sat. 14. April 2018
The effect of partial vacuum on the chemical preparation of the root canal system

From the early 20th century, when Walter Hess and Ernest Zürcher [1] demonstrated root canal anatomy with an unprecedented visual clarity, its complexity ...

News Thu. 9. March 2017
The role of the operating microscope - in conjunction with ultrasonic in preparation of root canal systems

The purpose of preparing of the root canal system is well understood and contemporary techniques involve the use of both hand and rotary instruments used in...

Mineral trioxide aggregate (MTA) is an endodontic sealer that emerged on the market in 1998. Through proven scientific results it has became the true ...

PRAGUE, Czech Republic: AIC Europe, which was founded in 2001 by Osstem Implant, has confirmed that the Osstem-Hiossen Meeting in Europe 2022 will be ...

AUSTIN, Texas, US: DentalMonitoring offers orthodontic and dental solutions and is a pioneer of the remote monitoring of dental care using artificial ...