The latest news
on 3D printing

The main mechanisms of nickel-titanium (NiTi) endodontic instrument fracture have been revealed as two modes of failure, one being torsional failure and the other cyclic fatigue. The former contributes to a significant proportion of failures.1 Cyclic fatigue fracture is caused by repetitive compressive and tensile stresses on the outermost fibres of a file rotating in a curved root canal, and torsional failure occurs when the tip of the instrument binds to the canal wall, even in a straight root canal.1

Torsional load can be limited during intra-canal rotary instrumentation by the torque-controlled endodontic motor: torque settings can be selected to prevent excessive torsional load on the instruments. It has been shown that the correct preset torque value for each instrument is very difficult to determine.4 If it is too high, safety becomes dependent on the clinician’s skill in avoiding over-engagement and/or blockage of the file. If it is too low, the rotary instrument will be loaded by repeated locking and release through use of the torque-controlled motor or auto-reverse function. However, in narrow canals, where instruments are subject to higher torsional stresses than in wider canals, the chance of experiencing these repetitive torsional loads is increased.

To this point, torque value at failure according to the ISO test has not been commonly used to determine torque settings in torque-controlled motors. In most cases, values are higher than torque at failure. As a consequence, the concept that the use of a preset torque value that is considered safe (i.e. capable of preventing shear fracture of the instrument) is not completely accurate. Therefore, NiTi rotary instruments should ideally exhibit a good resistance to torsion in all cases and in curved canals should also be flexible and resistant to cyclic fatigue.

Many factors can affect resistance to torsion, including design, dimensions, manufacturing process and motion.5 In the present study, two NiTi rotary instruments, similar in dimensions and design, were tested to compare torque at failure. The null hypothesis was that any differences found would be related to different manufacturing processes.

The following instruments from two different systems were tested and compared: ProTaper Next (Dentsply Maillefer) and EdgeFile X7 (EdgeEndo). For each brand, ten 17/0.04 instruments were subjected to a repetitive torsional test. The test was performed using a torque-controlled endodontic motor (MASTERsurg, KaVo). The motor allowed for precise recording of torque values during the instruments’ use. The accuracy and reliability of the device had been validated in a previous study.6 To perform the test, the apical 3 mm of each file was firmly secured, embedded in a resin block produced with a mixed autopolymerising resin (DuraLay, Reliance Dental Manufacturing). Each file was then rotated clockwise at a speed of 300 rpm until fracture occurred. The torque limit was set at 5.5 N cm, to ensure recording measurements ranging from 0.1 to 5.5 N cm. The torque values at failure were recorded by the integrated software of the motor and analysed using spreadsheet software. The data was analysed using one-way analysis of variance and a Tukey test with a significance level of α = 5%.

Table 1 shows the results from the present study. The ProTaper Next files demonstrated no significantly different levels of resistance in terms of maximum torque at failure compared with the EdgeFile X7 instruments (p < 0.05). Similarly, no statistically significant differences were found between the two instruments in terms of time to failure (p < 0.05). 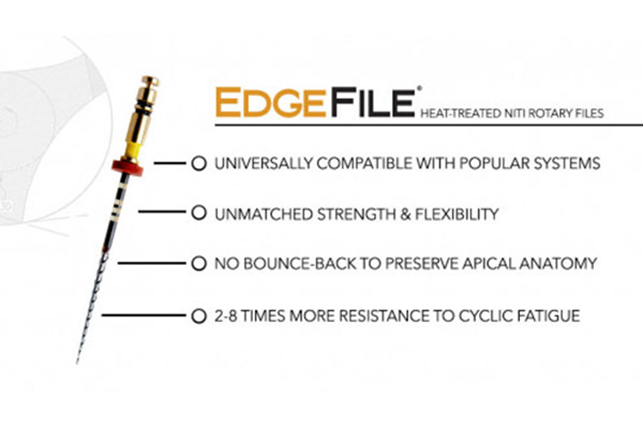 The ISO torsional resistance static test was developed more than 50 years ago to test manual stainless-steel instruments and is probably not ideal for testing rotary instruments that rotate at speeds much higher than 2 rpm or for the specific motors with torque control and auto-reverse mode.7 Therefore, in the present study, torsional resistance was assessed by using a different speed: the clinical speed (300 rpm).

The tested instruments were similar in dimension and design but had been produced through different manufacturing processes (alloys and heat treatments). According to the manufacturer’s website, EdgeFile X7 files exhibit a higher flexibility and a greater resistance to cyclic fatigue than competitors’ instruments do. In stainless-steel instruments, flexibility and torsional resistance are usually inversely proportional, which is mainly due to the mass and/or dimensions of the instruments. The greater the mass, the more rigid and resistant to static torsion the instrument is.8 In the present case, mass and dimensions were very similar, and torsional resistance was similar, showing no statistically significant difference between the two instruments. The null hypothesis was therefore rejected.

Hence, the present study showed that heat treatment does not significantly influence torsional resistance in contrast to the high increase in flexibility and fatigue resistance derived from heat treatment as reported in many published articles.9, 10