The European Federation of Periodontology affirmed its commitment to support Ukraine at its recent general assembly. (Image: Dobra Kobra/Shutterstock)

VIENNA, Austria: On 26 March, the European Federation of Periodontology (EFP) was able to hold an in-person meeting for the first time since 2019. The EFP’s annual general assembly took place in the Austrian capital of Vienna, where a new president, Prof. Andreas Stavropoulos, was welcomed and a campaign launched to provide financial aid for Ukraine.

The “Help Ukraine” campaign is planning to assist the Ukrainian people and refugees who have fled the country by calling on the EFP’s 37 affiliated national societies of periodontics to raise at least €30,000 in donations. The campaign was organised in collaboration with the World Health Organization-affiliated WHO Foundation, which works to deliver urgent healthcare to the most vulnerable groups.

“For the EFP, a European academic organisation within health and medicine, it was a reasonable reaction to support fellow Europeans in need,” stated Prof. Stavropoulos.

“Our donation campaign is a humanitarian action,” he added. 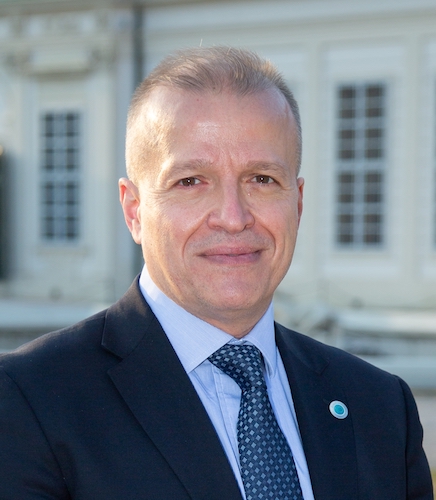 A new president takes over

A professor of periodontics at Sweden’s Malmö University, Prof. Stavropoulos took over as president of the EFP from Prof. Lior Shapira. In his first message since assuming the role, Prof. Stavropoulos called for the society’s members to work together despite any differences, writing, “What we have in common is much greater than what separates us.”

“We should not let minor differences and special interests divide us—we should stay united and continue jointly working for the pan-European recognition of periodontology as a dental speciality, for the benefit of patients,” he continued.

Prof. Stavropoulos also made special note of the upcoming EuroPerio10, labelling it “the global congress of periodontology par excellence”. The triennial congress will be held from 15 to 18 June 2022 at the Bella Center in Copenhagen in Denmark, the president’s home country. First held in Paris in 1994, EuroPerio is one of the most important and largest educational events for dental professionals specialising in periodontics and implant dentistry. The previous iteration, held in Amsterdam in the Netherlands, attracted a record-breaking 10,232 attendees, including periodontists, dentists in other specialties, dental students and dental hygienists, as well as other dental professionals, from 111 countries in total. According to the EFP, more than 6,000 people have already registered for EuroPerio10.

The general consensus among attendees of the EFP’s general assembly was that an in-person meeting was much needed after the predominantly online nature of meetings over the past two years.

“I am so pleased that this year we returned to a face-to-face GA [general assembly] meeting and could greet everyone in person,” said EFP Secretary General Prof. Nicola West.

She continued: “While online meetings have their place in our sustainability strategy, face-to-face meetings are essential for our business to operate, creating energy, warmth and friendship, which cannot be underestimated.”

“When I became EFP president, my wish was that my year would be a ‘return to normal’ and, despite the difficulties, I insisted on having an in-person general assembly, which was more than successful!” added Prof. Shapira.

ARLINGTON HEIGHTS, Ill., U.S.: With 6,000 members in 70 countries around the world, the Academy of Osseointegration (AO) is recognized as one of the premier...

LONDON, UK: The whiteSKY ceramic implant system from bredent medical has been on the market for more than 15 years, and its reliability has been ...

AUSTIN, Texas, US: DentalMonitoring offers orthodontic and dental solutions and is a pioneer of the remote monitoring of dental care using artificial ...

BRUSSELS, Belgium: The Council of European Dentists (CED), the Standing Committee of European Doctors (CPME) and the Federation of Veterinarians of Europe ...

NEWBERG, Ore., U.S.: A-dec is proud to announce a new addition to its team, Christian Findeisen. Findeisen has recently joined the manufacturing company as ...