“I am looking forward to the best EuroPerio ever”

Interview: “I am looking forward to the best EuroPerio ever”

Home/Articles
Prof. Phoebus Madianos is looking forward to coming together with colleagues and friends at the forthcoming EuroPerio congress, which will take place from 15 to 18 June this year in Copenhagen. (Image: EFP)

Dental professionals have had to wait longer than usual for the world’s leading congress on periodontics and implant dentistry. Having been postponed by one year owing to the SARS-CoV-2 pandemic, EuroPerio10 will take place from 15 to 18 June this year in Copenhagen in Denmark, and the organisers are gearing up for a congress with a rich scientific programme, live surgeries and ample networking opportunities. Dental Tribune International spoke with Prof. Phoebus Madianos, professor in the Department of Periodontics at the National and Kapodistrian University of Athens in Greece and chairman of the Scientific Affairs Committee of the European Federation of Periodontology (EFP), about the return of the record-breaking event and what attendees can expect.

Prof. Madianos, last year, the EFP celebrated the 30th anniversary of its foundation. In your opinion, what have been the greatest achievements and milestones of the society?
The EFP’s greatest achievement has been becoming the global benchmark community in periodontics and implant dentistry from a scientific point of view. It is the world’s leading platform for key stakeholders, not only periodontal scientists and clinicians but also dentists, researchers, policymakers, practices, companies, and other dental and health professionals.

Primarily, we achieved this not only through our continuous leadership and the prestige of our meetings—the EuroPerio congresses, in particular—but also through our publications, campaigns and outreach activities. Today, opinion leaders in the field of periodontal health and disease from around the globe draw on the EFP’s expertise.

Aside from EuroPerio, over the last 30 years the EFP has had several other major milestones. These were the success of its Perio Workshops (organised since 1993) and accredited postgraduate programmes in periodontics (initiated in 1998), the creation of our website and the founding in 2014 of the Perio Master Clinic triennial conference for clinicians. In addition, the EFP’s annual awareness event, Gum Health Day, was started in 2014, and we launched outreach campaigns in 2017, the first of which being the Oral Health and Pregnancy campaign.

Regarding EuroPerio, one of the landmark events was EuroPerio1 in Paris in 1994, when 1,200 attendees made the congress a remarkable success and paved the way for future editions. EuroPerio7 was held in Vienna in 2012, and it set new standards in terms of format, professionalism and quality. EuroPerio9 was held in Amsterdam in 2018, and the threshold of 10,000 participants was passed for the first time.

The tenth edition of the EuroPerio congress is just a few months away. Owing to the SARS-CoV-2 pandemic, the EFP decided in 2020 to postpone EuroPerio10 by one year and, consequently, the periodontics community has had to wait four years instead of three to come together. In retrospect, was this the right decision and are you confident that the event can take place this June?
When the pandemic hit Europe in March 2020, we were glad that we had another year until the next instalment of EuroPerio. As the pandemic progressed, it became clear that it would have a much greater impact than originally expected. Therefore, the EuroPerio10 organising committee, together with the EFP, took the decision to postpone the congress by one year. As a result, future EuroPerio congresses will also be held a year later than originally planned. We are convinced that this was the right decision, and we are confident that we will be able to hold the meeting that we all hope for in June 2022. Hence, EuroPerio, the “Olympic games” of dental congresses, will take place four years after the last one, just like the Olympics!

The past two years must have been a challenge for scientific communities like the EFP. How did collaboration change as the COVID-19 crisis raged on?
The pandemic drastically reduced the number and frequency of patient visits to dental clinics. Fear of infection and often misinformation prevented many people from keeping up with treatments. The EFP felt that it was appropriate to provide its affiliated societies and the 16,000 oral healthcare professionals it represents with a COVID-19 safety protocol in order to help them operate safely. In addition, we launched a campaign to encourage people to visit their dentist and to continue to take care of their oral health.

Personal interaction and networking are very much relied upon within the scientific community and in the area of education. These have only been possible throughout the past two years by changing our concepts of interaction and moving towards virtual communication and education rather than the in-person exchange of knowledge.

The last EuroPerio congress was held in Amsterdam in the Netherlands in 2018. (Image: EFP)

In June 2021, the EFP launched a series of online scientific sessions that aimed to bridge the gap until the next in-person event in 2022. How has the EuroPerio Series been received and have these online sessions proved to be a viable alternative to in-person events?
Rather than putting everything on hold and continuing with it all a year later, immediately after the postponement we discussed ways in which we could maintain excitement and continue to promote our activities. We knew the global periodontics community was excited about educational content. At the same time, periodontics professionals all over the world faced a lack of in-person educational opportunities. We wanted to continue promoting the June 2022 event by looking back at previous editions of the congress as well as highlighting various topics on the already published EuroPerio10 scientific programme; in other words, we helped to promote the event by sharing scientific education. A second aim of the virtual EuroPerio Series was to extend the reach of EFP education to an audience who had not previously attended EFP meetings.

We started with a free kick-off event in June 2021 and this was hosted at the Bella Center, the venue in Copenhagen where EuroPerio10 had been due to take place. This event, titled “Mucogingival surgery—from Amsterdam to Copenhagen”, used the legendary live surgery from EuroPerio9 in Amsterdam as a springboard to review and discuss a series of clinical problems with a renowned panel of experts in mucogingival surgery. This online event was attended by more than 2,000 participants from all over the world, and we continued with monthly sessions that were accessible free of charge to everyone who had already registered for EuroPerio10.

Feedback on these sessions has been positive, but we know that, whereas virtual education is a suitable substitute, it will never replace in-person get-togethers.

EuroPerio9 attracted a record-breaking 10,232 periodontists, dentists, dental students, and dental hygienists, as well as other dental professionals, making it the largest event so far. Do you expect a similar number of participants this year?
EuroPerio is all about quality not quantity. The reason why participant numbers have increased over the years is simply because it is the world’s leading congress in periodontics and implant dentistry and has the best speakers, the latest topics and many opportunities to network with colleagues from all over the world.

As already mentioned, our greatest aim is to make the congress as accessible as possible to anyone in the periodontics world. To what extent interested participants will still face travel restrictions or similar challenges in June is something that we cannot foresee. We have never faced a situation like this pandemic, and therefore, it is also difficult to project what would be a realistic attendance for this year’s edition.

Nonetheless, we are aiming for the best EuroPerio ever and, if we get close to the record attendance that we had in Amsterdam in 2018, we will be extremely happy. 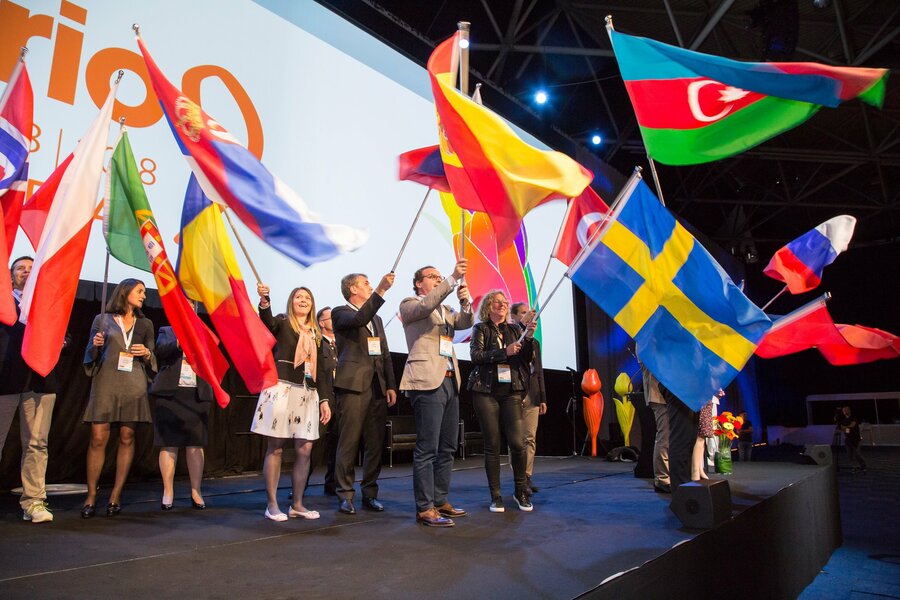 In the EuroPerio operning ceremony, member societies of the EFP are traditionally invited onstage to parade their national flags in front of the audience. (Image: EFP)

How can dental professionals benefit from attending EuroPerio10?
They will be able to learn from the best experts in the world since there is a faculty of more than 120 top international speakers. They can update and expand their skills and their knowledge with authoritative, state-of-the-art presentations on all hot periodontics topics. They can choose from a huge variety of topics and approaches and enjoy the certainty that, at any given moment, there will be a session that is just perfect for them. They can network, build relationships with colleagues, discuss ideas, draw up projects and find the latest proposals from the dental industry. They can enjoy a lively congress in a lovely city. All in all, for four days, they can see what periodontics and implant dentistry will look like in the coming years.

As social distancing rules are still in place, what will networking opportunities look like?
We will—for all aspects of the event—apply all hygiene and safety measures that are reasonable and responsible at the time of the meeting. We are planning networking opportunities, such as a welcome reception and speakers’ dinner for the Wednesday and the official congress evening event for the Saturday. However, we have not yet planned a congress party for the Thursday. This casual after-work party event was introduced at EuroPerio8 in London in 2015, and at the Amsterdam event in 2018, it attracted 2,500 participants. Currently, we do not feel that events like that should take place, but we will make sure that our participants have ample networking opportunities.

In line with the EFP Sustainability Manifesto, the EFP has announced that this year’s EuroPerio will be more sustainable. Could you please explain what that means?
At the EFP, we understand sustainability not only as an environmental issue but also as a broader challenge to the ways in which we operate and think. It is one of our priorities. Often, modest changes have a big positive impact and help make a difference. For EuroPerio10, we aim to reduce printed congress materials by 50%. When they are indispensable, printed materials will be made from recycled paper. The lanyards that we will use will be made only from recycled polyethylene terephthalate. Moreover, EuroPerio10 attendees will receive public transportation tickets as part of their registration package and all speakers who must reach Copenhagen by plane will carbon compensate their flights.

What are you are personally most looking forward to?
Personally, I am looking forward to the best EuroPerio ever, which will have the best in science, clinical practice and innovation. Also, coming together with colleagues and friends after such a long while is something that will be a highlight for me, as will be enjoying the atmosphere and having fun in and around the Bella Center in Copenhagen!

Prof. Lior Shapira was elected president of the European Federation of Periodontology (EFP) in March, and he promptly outlined his vision for a return to...

BRUSSELS, Belgium: The European Federation of Periodontology (EFP) has announced that the tenth edition of its triennial congress, EuroPerio, will be held ...