What else Cologne has to offer

Are you a night owl? Do you enjoy fine art? Do you have a sweet tooth or crave fried foods? A detour into the heart of Cologne can fill these and many other desires. Cologne, which is considered to be the stronghold of both the German carnival tradition as well as the art trade, has something for everyone. With all of the cultural and culinary offerings that characterise this always-laughing city, you will certainly get your money’s worth once the IDS halls close each day. Read on for tips and suggestions for fulfilling your thirst for urban adventure!

Cologne in the day 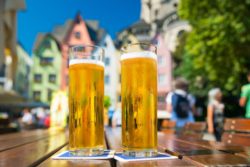 Cologne is famous for its brewhouse culture. (Photograph: yotily/Shutterstock)

Yes, the landmark of the Rhine city might be the Cologne Cathedral, but Cologne has so much more to offer. For instance, a trip to the Heinzelmännchen fountain, the city hall, or the Melaten cemetery is highly recommended. The last covers an area of over 435,000 m2 and features many impressive memorials and tombs. If you want to get to know Cologne from a completely different perspective, however, then the “So wor et fröher” district tour could be something for you. The tour explores Cologne’s red-light district as it was during the sixties and seventies in the area between Eigelstein and Friesenviertel. The Kölner Lachexpedition, in contrast, could be considered quite the opposite to this lascivious trip into the city’s past (www.lachexpedition.de/touren/koelner-lachexpedition). The sightseeing tour, initially developed by Klaus-Jürgen “Knacki” Deuser, among others, offers a unique mix of informative anecdotes and entertaining comedy. Lastly, you can experience the traditional brewhouse culture of Cologne first-hand in a 2-hour tour that includes all kinds of local breweries—both well-known ones and local secrets (www.koeln-brauhaustouren.de). In terms of both history and taste, it is definitely worth spending an evening at one of these.

During IDS, you should also consider taking a break, every once in a while, to rest your feet. And what better way to do so than by enjoying a piece of homemade pie and a cup of hot coffee? Visit the cosy and slightly hidden Kaffeebud Ehrenfeld (www.kaffeebud.net) to find out what a “third wave” coffee is. If you’re looking for something a little less fancy, you might prefer Cafecafe Ehrenfeld (www.cafecafe.de). With coffee close to its heart, this cafe offers refuge from the hustle and bustle of the Rhein metropolis in the form of creamy lattes and authentic New York-style cheesecake—also not to be overlooked is the breakfast, which includes homemade spreads that come highly recommended.

Just a couple of blocks down the street is a locale that will appeal to you if you have a predisposition to nostalgia: Café Schwesterherz offers a quaint coffee-house vibe and a familiar living room atmosphere (www.schwesterherz-koeln.de). If you are longing for a holiday feel, however, a visit to Sabor ’Ermoso is just the ticket: between surfboards hanging on the walls and little Spanish delicacies, the cappuccino in this cafe tastes almost twice as good. Located in the south of Cologne, Sabor ’Ermoso is the perfect place to unwind and recharge your batteries after a busy day of dental business in the halls (www.saborermoso.com).

Enjoy your stay at IDS even after the doors of the Cologne trade fair have closed. After all, you will be in one of Germany’s most vibrant and charming cities. As the sun goes down, Cologne reawakens in a different light: after hitting a “Büdchen” kiosk for a beer—or two—to go, locals will make their way to their favourite Kölsch-serving bar, so why not join them? 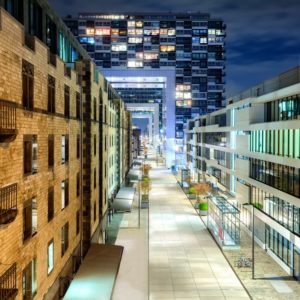 The trendy bar Zum scheuen Reh is located next to the Köln West train station and is perfect for starting the evening: get to know some Cologne locals while enjoying a couple of long drinks and the live music on offer in the bar’s outdoor area (www.zum-scheuen-reh.de). Every Thursday is Gin & Tonic day and glasses are served for only €2—different brands of gin can be tried for an extra €1.

Afterwards, you can hit Bumann & SOHN, which is close to the Ehrenfeld train station. It is here that beer garden atmosphere meets urban industrial vibes, and where the dynamic, alternative flair of the young district can be felt best (www.bumannundsohn.de). Coming early pays off!

The next destination is STAPEL.BAR, which is located within walking distance from Bumann & SOHN at the heart of the Helios district. At STAPEL.BAR, you can buy freshly brewed Gaffel Kölsch from the barrel and experience a colourful music programme, including DJs, live acts and local artists (www.stapel.bar). Are intrigued by the original steel dartboard? Then this is also the place for a casual round of darts. If you are in the mood for dancing, you can spend the rest of the night in the northern part of Cologne between Ehrenfeld and Nippes, at the Odonien nightclub to be exact. Apart from concerts, plays, flea markets and open-air film showings, you can dance to predominantly electronic club music in the midst of obscure metal sculptures and impressive fireworks.

As far as arts and culture are concerned, Cologne has a great deal to offer. In the special exhibition “Andy Warhol—Pop goes art”, the Museum für Angewandte Kunst Köln is presenting a private collection not previously shown to the public. The exhibition features sketches and drafts and almost every record cover designed, conceptualised and produced by the artist. Moreover, the Wallraf-Richartz-Museum is showing 130 loaned works from well-known collections and museums in the US and Europe. The survey exhibition “Once upon a time in America” features pieces from over 300 years of American art, including works by Edward Hopper, Mark Rothko and Jackson Pollock. In addition, the “Under the magnifying glass” exhibition at the Museum Schnütgen is highly recommended, as is the anniversary exhibition “All under heaven”, which celebrates 40 years of the Museum für Ostasiatische Kunst Köln.

However, an insider tip is to visit the Museum Ludwig at the Cologne Heinrich-Böll-Platz. The gallery, which resembles the Tate Modern in London in terms of its artistic content, is exhibiting works from British artists David Hockney and Richard Hamilton until April 2019. Further information on the exhibition schedule can be found online (www.museum-ludwig.de).

In addition, if you enjoy watching historical retrospectives, previews or premieres of independent film productions, then the Filmforum NRW is for you. The entrance is situated on the south side of the museum (www.filmforumnrw.de). Another highlight for cineastes is the ODEON: the cosy, retro-style movie theatre often shows interesting European art house productions (www.odeon-koeln.de).

Theatre-goers can attend the premiere of Werther by Johann Wolfgang von Goethe at the Freies Werkstatt Theater Köln on 15 March (www.fwt-koeln.de). And music lovers can enjoy concerts by the talented Electronica musician RY X in the Carlswerk Victoria on 13 March and Manfred Mann’s Earth Band in the Kantine on 16 March.

Whether you are interested in music, literature or history, Cologne and its peculiarities are best explored with a full tummy. For quite some time now, an unofficial institution of the city has been the falafel. Usually, it is freshly made with coriander or parsley (either Lebanese or Syrian style) and fried to perfection. In Cologne, these spicy chickpea balls taste like nowhere else in Germany—preferably with a giant spoon full of tahini. Try it yourself: take a stroll down Venloer Street in the young, vibrant district of Ehrenfeld and see how long you can resist the smell of the various oriental bistros and cafés. 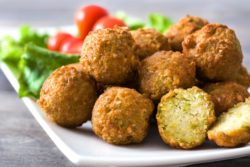 The best falafel can be found in Ehrenfeld. (Photograph: etorres/Shutterstock)

The best falafel can be found at the traditional Habibi (www.habibi-koeln.de), in doughnut shape at Vegan Food Revolution (www.vegan-food-revolution.de), at Beirut while enjoying a beautiful view over the Rhine (www.beirut-restaurant.de) or at the authentic Libanon Restaurant (www.libanon-restaurant.metro.bar).

In case, however, your tastes are more carnivorous, then you should pay Karl Hermann’s a visit. Also located on Venloer Street, here you will find high-quality burgers with freshly minced and succulently grilled meat patties—free from antibiotics—in a fluffy brioche bun (www.karlhermanns.de). If you still have some room left afterwards, you can hit Frittenwerk Köln for some delicious homemade fries (www.frittenwerk.com/koeln). Enjoy ones made from regular or sweet potatoes with chive-and-cheese topping. Whatever you choose, make sure to also try the lemon aioli and the homemade guacamole. Naturally, humans are no goats and these large amounts of salt need to be counteracted somehow, which is why a visit to one of the Kölsch-serving traditional restaurants is a necessity. Enjoy a chilled Kölsch beer like a true local at Bierhaus en d’r Salzgass or Weinhaus Vogel, where not only simple, authentic Cologne food is served, but the spirit of the city can be experienced.

LONDON, UK: The UK general election is just weeks away, scheduled to be held on 12 December. In recognition of the oral health inequalities that exist within the nation, the Labour Party has announced that, if elected, it will abolish charges for all dental check-ups in England.

Interview: Digital workflow in dentistry—What’s in it for you

Dr Simon Kold from Denmark explains how he and his wife and co-surgeon, Dr Louise Kold, implemented a digital workflow in their practice and talks about the lessons they learnt from it.

MELBOURNE, Australia: The standard of oral health in Australia is well below that in many parts of the Western world, with one report showing that 90 per cent of all Australians have experienced dental caries of some kind. On Saturday, 18 May, Australian voters will head to the booths to elect a government for the following four years and Bill Shorten, leader of the Labor Party, has announced that, if he wins, his party will invest A$2.4 billion in seniors’ dental care.

COLOGNE, Germany: Since 2018, Meoplant Medical dental implants have managed to further accentuate dental implant commercial retail standards with regard to what implantologists can expect of a high-quality, economically priced dental implant system. Boasting a proprietary design, development and state-of-the-art engineering—all from Germany—the Meoplant implant is currently making its market debut and the company is setting up European distribution channels.