Home / Marketplace / exocad/ News
Tillmann Steinbrecher (right), CEO and Co-Founder, and Maik Gerth, CTO and co-founder of exocad, have shaped the dental market with their innovations. For the second time in a row, exocad’s software ChairsideCAD received the renowned Cellerant Best of Class Technology Award. Gerth and Steinbrecher were delighted to receive the award from the Cellerant expert jury. (Image: exocad)
exocad.com
info@exocad.com
share
save

With over 37,000 installations in more than 150 countries, exocad is the world’s leading original equipment manufacturer (OEM) for dental CAD software. Every day, dental technicians, and increasingly also dentists, design high-quality CAD/CAM-manufactured restorations for their patients with exocad’s robust software solutions. More and more people around the world have access to aesthetic and affordable prosthetics. More than ten years ago, that was exactly the vision of the two young software developers Tillmann Steinbrecher and Maik Gerth. In 2006, they met during a joint research and development project at the Fraunhofer Institute for Computer Graphics Research IGD (Fraunhofer IGD) in Darmstadt. The topic was CAD/CAM in dental technology. This year, exocad celebrates its tenth anniversary. On this occasion, CEO Tillmann Steinbrecher and CTO Maik Gerth explain how they developed DentalCAD and founded exocad.

Mr Steinbrecher, Mr Gerth, you got to know each other during a doctoral project on CAD/CAM in dental technology. How did the software development of DentalCAD come about? What happened to your doctorate?
Maik Gerth (MG): I actually wanted to do a research project with 3D radiographic devices for cancer detection at the Fraunhofer IGD. But then I got the opportunity to work with Till on the exciting topic of CAD/CAM for dental technology. At that time, simple crowns and frameworks could be milled as quickly as possible on the basis of 3D data. The development of zirconia had led to this project. So, we were also lucky enough to be in the right place at the right time.

Tillmann Steinbrecher (TS): The project was supported by the CAD/CAM industry. Right from the start, we were in constant contact with manufacturers of digital hardware. We quickly found out that they were more interested in specific software products than in research and development services. Maik and I noticed, at the same time, that we enjoyed product development a lot more than writing scientific papers. So, one thing led to another, and we began to develop a specific software product. Instead of doing a doctorate, we later founded exocad. 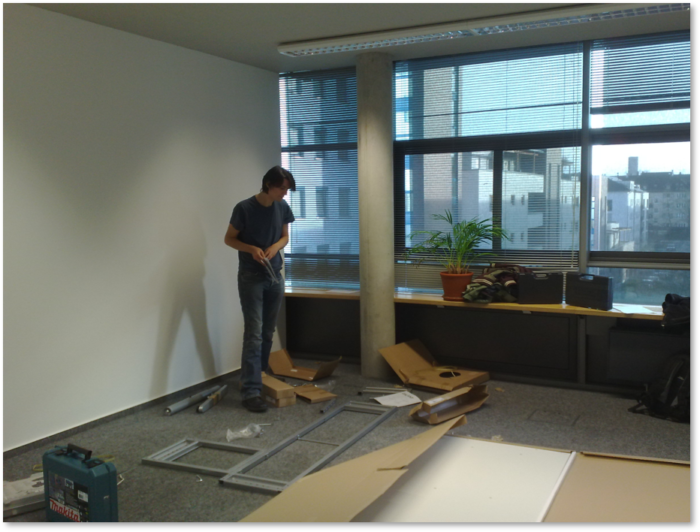 “Self-made” was the name of the game for the young entrepreneurs when exocad started in 2010: Maik Gerth (pictured) and Tillmann Steinbrecher (behind the camera) put together the first desks and cabinets themselves. (Image: exocad)

How long did it take you to develop the first version of DentalCAD?
TS: We were able to build on decades of research and development at the Fraunhofer IGD. Thanks to this background, we developed our own software platform in a relatively short time. In addition, we were able to work in a very agile way, as a small team. Because in the area of software development, small teams in particular are incredibly powerful.

MG: We developed the basic building blocks for the DentalCAD software in 2008 after we had rejected our first two software approaches.

TS: By the end of the year, we already had an actual software product that could be used to process the first patient cases.

What was and is the greatest challenge in the development of DentalCAD?
MG: We have to process large and complex 3D data in such a way that it can run at high speed on common PCs. In addition, we often have to resolve conflicting requirements. For example, on one hand, material, milling service or milling system providers must enforce certain minimum thicknesses or crown margins so that the milling process works without problems and the stability of the restorations can be guaranteed. On the other hand, dental technicians and patients want a restoration that is as aesthetic as possible. Implementing opposing requirements in software is still one of the greatest challenges today.

Where did the name exocad come from?
TS: We systematically looked for a name that could be pronounced well in all languages. The “CAD” had to be part of the name. One evening, Maik and I were sitting together, and I suggested x-o-cad. Maik thought I had said “exocad”. We both liked that, and that’s how it became exocad. 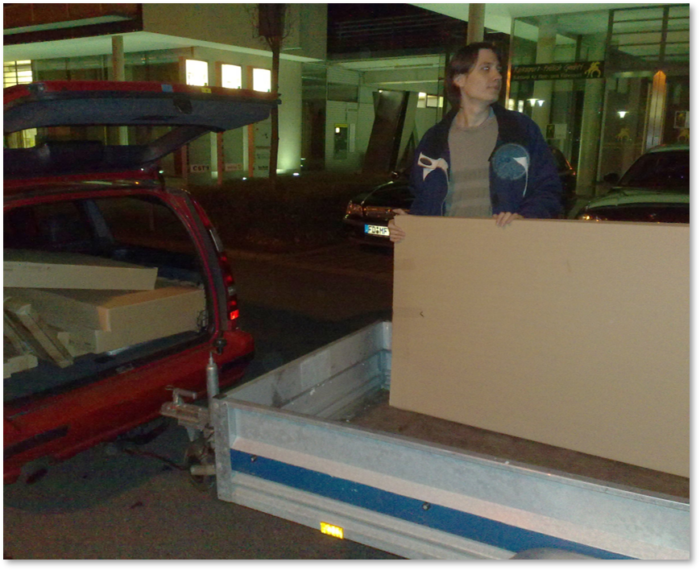 In 2010, Tillmann Steinbrecher and Maik Gerth (pictured) founded exocad. They bought the first desks, chairs and cupboards themselves from a Swedish furniture store. (Image: exocad)

Do you remember your first day as an entrepreneur?
TS: Yes, of course. The first thing we did was to set up our desks, which we had bought in the furniture store and picked up ourselves with my father’s car. Then we set up our computers and off we went.

Did you already imagine exocad as a global company back then?
MG: Of course, we were also internationally oriented from the start. But it wasn’t until around 2015 that we realised the extent to which our software was actually being used—even in areas where CAD/CAM installations were not expected at all. Today our software solutions are used in 150 countries—and that’s a great feeling.

And how did the company develop?
TS: At IDS 2011, we presented ourselves for the first time as exocad with our own booth. We had registered for the fair very late and, therefore, received a booth in the farthest corner of the hall. Nevertheless, the fair was a success for us. We realised that the exocad brand was already better known than we had thought, and we met new sales partners. The same year, I flew to a dental fair in Shanghai to find local partners in Asia. With my laptop in my pocket, I headed for the stands of companies that did something with CAD/CAM and presented our software to them. This has led to successful sales partnerships that still exist today. Some partner companies were small and unknown when we started working together. Over time, they have developed into major global players. We grew together. 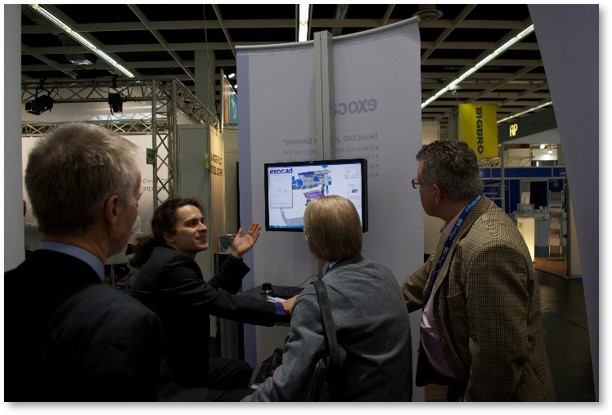 In 2011, exocad presented itself for the first time at IDS. Tillmann Steinbrecher (second from left) explained the open software architecture of exocad to interested customers. He and Maik Gerth were surprised at how well known the exocad brand was at the time. (Image: exocad)

In what direction is there still development potential for the exocad software?
MG: The requirements for exocad software solutions are becoming more complex. The number of supported restorations, applications and workflows keep increasing. The interdisciplinary treatment teams are growing. For example, a patient case is solved with DentalCAD and the implant planning software exoplan. So, the goal is a workflow that is simple and intuitive for everyone involved.

TS: The interface for the dentist is becoming more important, as are the tools for connecting to the digital hardware in the dental practice and for interdisciplinary communication. Dentalshare is already a cool communication tool that DentalCAD users can use to share their 3D views with team partners. The 3D planning can even be called up on a tablet without having to load the software beforehand.

MG: In the future, you will work more on tablet computers; the computing power is then provided in a cloud. Cloud-based work can reduce hardware and IT costs in dental laboratories, clinics and practices and accelerate automation processes. There is potential in even faster and more efficient work processes.

Where do you see exocad in ten years?
TS: I see us as a provider of a globally unique, comprehensive open software platform on which software solutions for the entire digital dentistry are located.

MG: Dental technicians and dentists from all disciplines will communicate with one another via such a software platform in order to jointly plan patient cases using the exocad 3D CAD/CAM technology and efficiently implement them using different digital hardware.

Editorial note: The full-length version of this shortened interview can be found here.

As an industry innovator and enthusiast in the field of dental implants, dentures and digital technology, Dr Michael Scherer is an expert in his field and ...

News Tue. 21. September 2021
Interview: “Our booth will be the meeting point for the exocad community”

In this interview, Novica Savic, chief commercial officer at exocad, explains why the company’s commitment to IDS remains unchanged and what visitors can ...

WOBURN, Mass., US/DARMSTADT, Germany: Exocad, an Align Technology company and leading dental CAD/CAM software provider, has announced that it will be ...

DARMSTADT, Germany: On 21 and 22 September, the second exocad Insights took place—this time in a hybrid format, owing to the COVID-19 pandemic. Around 300...

DARMSTADT, Germany: CAD/CAM software provider exocad has celebrated its tenth anniversary and its newest releases at Insights 2020, which was held on 21 and...

My unexplored ways to work with die silicone