SEOUL, South Korea: Osstem Implant, a leading company in global implant sales, has announced that it has taken the initiative to help to develop regional communities and offer philanthropic aid by actively conducting environmental, social and governance (ESG) activities in countries where its subsidiaries operate.

The Middle East subsidiary of Osstem Implant provided a free four-day clinical training programme to 23 dentists from national, public and private hospitals in Ethiopia at the Myungsung Medical College located in the nation’s capital of Addis Ababa. Starting on 6 September, Dr Yeong-dae Song, president of the Korean Academy of Implant Dentistry, conducted an intensive implant dentistry training programme with the title of “MASTER COURSE—Intensive Implant Course in Ethiopia”. Dr Song demonstrated the placement of implants to the training course participants.

The Middle East subsidiary of Osstem Implant arranged the educational programme with the support of the Korea Trade-Investment Promotion Agency. Osstem Implant jointly conducted the programme with MCM General Hospital, one of the largest and the most advanced general hospitals in Ethiopia. The hospital concluded an agreement with Osstem’s Middle East subsidiary in May for the supply of dental chair units. This regional subsidiary of Osstem Implant will train local dentists to conduct implant surgery by providing free clinical training programmes in eastern and western regions of Africa at least once a year. 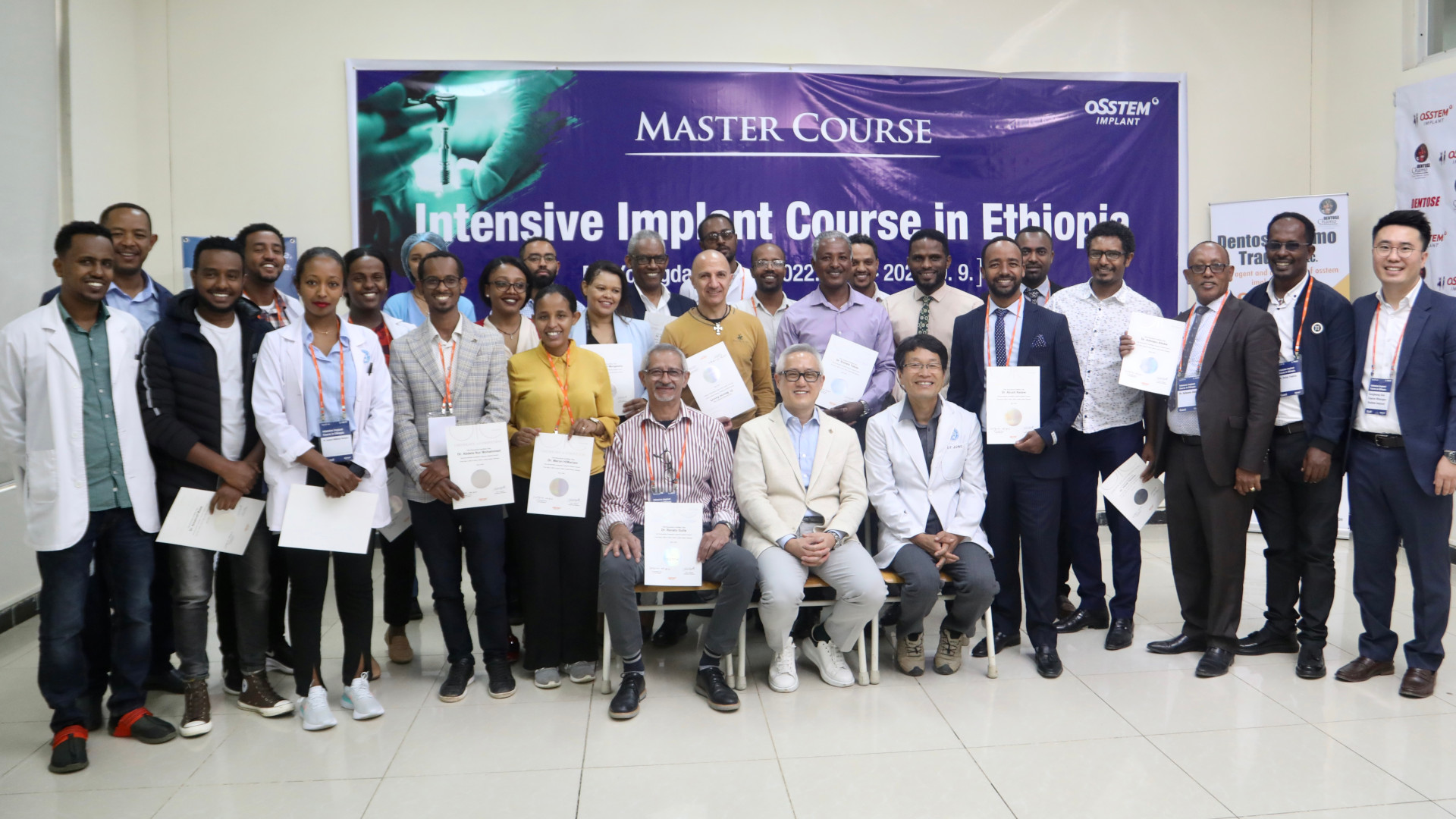 Osstem Implant’s fund-raising activities in relation to international issues are also under way. The European subsidiary of Osstem Implant is taking part in #TogetherHasNoLimits, a fund-raising campaign that aids the settlement of war refugees and supports the emergency treatment and education of the socially disadvantaged, including women and children. In this campaign, the subsidiary will be working together with the Andrea Bocelli Foundation, a non-profit foundation based in Italy. The European subsidiary will conduct a donation-collecting campaign with dentists from around the world who will be participating in the 2022 Osstem-Hiossen Meeting in Europe scheduled to be held on 28 and 29 October in Rome in Italy.

In addition, Osstem Implant is playing a role in spreading South Korean culture to local communities in other countries. Its Uzbekistan subsidiary was a major sponsor of the 13th Dr Baek Mun Jong Cup International Open Taekwondo Championships, the most prestigious taekwondo contest in Uzbekistan, which was held in Tashkent, the capital city, in May. “People in Central Asian countries, including Uzbekistan, Kazakhstan and Kyrgyzstan, ardently love taekwondo,” said a manager at the Uzbekistan subsidiary of Osstem Implant. “Central Asian people’s deep interest in and love for Korean culture contribute to enhancing the position of communities of South Korean residents while positively affecting the expansion of business networks by South Korea-based companies, such as Osstem Implant, by forming amicable relations with local communities.” 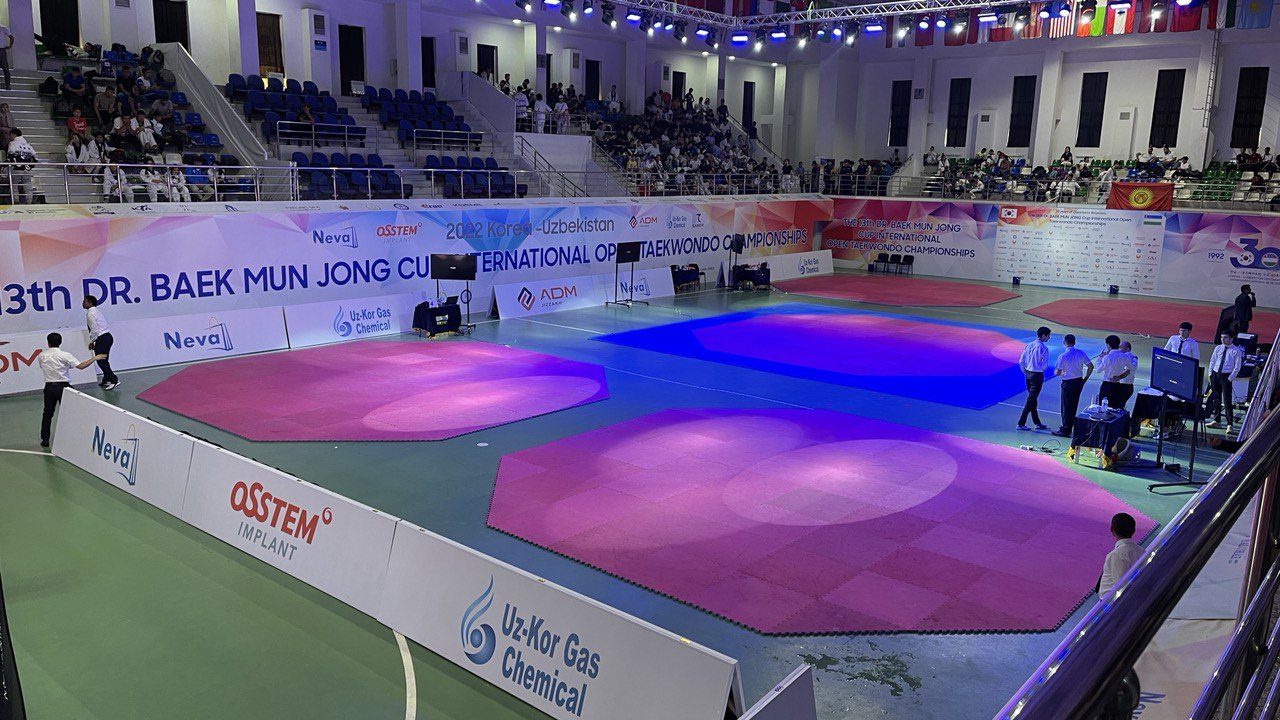 A scene of the venue of the 13th Dr Baek Mun Jong Cup International Open Taekwondo Championships held in May in Tashkent in Uzbekistan (Image: Osstem Implant Uzbekistan subsidiary)

In recognition of the outstanding achievement of selling its products in 87 countries through its 30 overseas subsidiaries, Osstem Implant was named a “company that contributed to national development” at the Commerce and Industry Day ceremony held in May by South Korea’s Ministry of Trade, Industry and Energy (MOTIE).

Also, in recognition of its contributions to spreading advanced technologies in China by operating a dental technical school through its China subsidiary while helping develop and promote the welfare of South Korean residents in the region through its subsidiary in Guangdong in China, Osstem Implant received the MOTIE minister’s award in the Overseas Business and Korean Residents’ Industry segment. Moreover, Osstem Implant is active in leading ESG management by conducting unique social contribution programmes in other countries, such as its support for the provision of dental treatment for police officers in Mongolia.

SEOUL, South Korea: Osstem Implant’s OneGuide, a unique surgical guide for guided surgery, does not require the production of separate guides for ...

News Thu. 1. September 2022
A look into how Osstem created the world’s best-selling implants

SEOUL, South Korea: With more than 3,000 different implants and abutments, Osstem Implant has the most diverse implant portfolio in the world. According to...

SEOUL, South Korea: Specialists at the Osstem’s Bone Science Research Institute devote themselves to developing ways to regenerate bone and soft tissue by...