Clear aligners: The star of dentistry in 2021

LEIPZIG, Germany: Last year, clear aligner therapy provided dentists around the world with an attractive income stream even as patient volumes remained sluggish. Indeed, major dental companies increased investment in their clear aligner portfolios during the year and some did so while divesting other parts of their businesses. Record case shipments were recorded, and the continued development of clear aligner therapy supported the maturing and further adoption of digital workflows and spurred new innovations in treatment planning. It is therefore fair to say that clear aligners did more than simply straightening of teeth in dentistry in 2021.

Dental markets proved their resilience in 2021, and clear aligners helped them to virtually claw themselves back to pre-pandemic levels of sales and oral care provision. If we consider the newest and most cutting-edge areas of dentistry—such as fully digital workflows and 3D printing—we find clear aligner therapy at centre stage. For example, a recent study led by researchers at Semmelweis University in Budapest found that the field of orthodontics accounted for the second most common use of 3D printers in dental settings. Dental manufacturers churned out more software updates during the year that further integrated intra-oral scanners and clear aligner systems into orthodontic practice, and the popularity of clear aligners helped to achieve a broader acceptance of teledentistry among consumers, insurance providers, and dental boards and associations.

Let us take a closer look at the performance and business activities of the major clear aligner manufacturers in order to better understand just how—in the words of Align Technology CEO Joseph Hogan—“digital orthodontics presents the fastest growing and largest market in the world of medical devices”.

Major dental brand owner Envista Holdings announced in late 2021 that its acquisition of Carestream Dental’s intra-oral scanner business was expected to close in the first half of this year. Amir Aghdaei, CEO of Envista, told investors in February that the company’s long-term strategy was to support dentists as they increasingly digitise their workflows. Intra-oral scanners, he said, were a “critical first step to many high-value specialty dental procedures, including implant surgical guides, prosthetics and clear aligner treatments”.

Envista grew to beyond pre-pandemic levels in 2021, helped along by a stronger focus on faster-growth and higher-margin specialty products and technologies, of which its orthodontic business is a key part. Although hedging its bets on a mixture of fixed appliance and clear aligner therapies, the company’s clinician-led clear aligner system, Spark, reached US$100 million (€88.6 million) in sales in November and its 100,000th patient.

Responding to a question about Envista’s focus after the Carestream acquisition, Aghdaei said that offering differentiated solutions to patients through an integration of its portfolio was key. “Look at the orthodontic space,” he commented. “[We] see this combination of bracket and wire as well as clear aligner offer significant opportunity for us to become a lot more digitally capable.” He explained that, in 2022, Envista would continue to ramp up its Spark offering. “In order to do that, we want to create an open platform that we can integrate other capabilities, other software tools, other [artificial intelligence] tools [into], so we can give people choices,” he said.

Align Technology ships more trays than ever before

With consistently high sales volumes throughout the pandemic, Align has shown the world that clear aligner therapy can stand the test of difficult times. The company shipped 2.5 million Invisalign cases in 2021, a year-over-year increase of 54.8%, and aligners earned the company a record US$3.2 billion (€2.82 billion) during the year.

With German software developer exocad now under its wing, the Invisalign manufacturer has evolved into one of the largest digital dentistry providers with its Align digital platform—consisting of software, hardware and services that support clear aligner therapy and restorative dentistry.

The company believes that new innovations in its digital platform will revolutionise orthodontics and restorative care by providing dentists with access to real-time treatment planning and modification capabilities, as well as with greater flexibility and more accuracy in treating malocclusion. Hogan said in February: “It’s through the convergence of advancements in digital technology, Align’s unique capabilities and know-how, and data from millions of Invisalign patients that we are able to bring these new Invisalign innovations to our customers this year.”

A cornerstone of Align’s digital platform is the iTero intra-oral scanner, which, together with Invisalign, has hastened the adoption of digital workflows among dentists around the world. In 2021, Align nearly doubled its revenue for imaging systems and CAD/CAM services, reaching US$705.5 million, and the vast majority of Invisalign case starts in the fourth quarter were submitted via an intra-oral scan: 85.4% worldwide and 89.1% in the Americas, up from 84.0% in the comparable period in 2020. 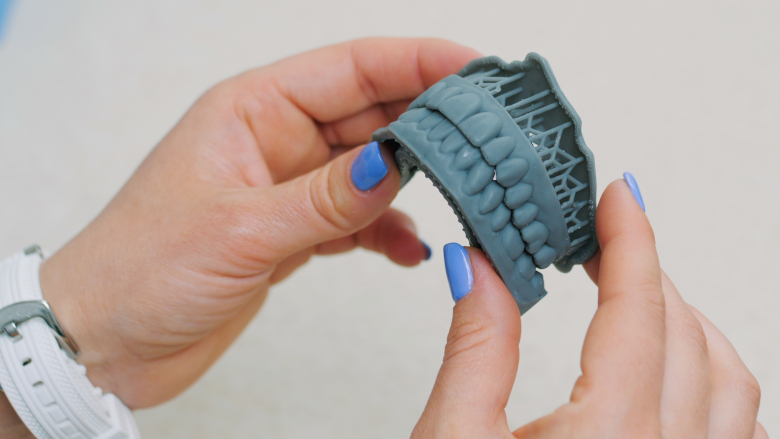 A recent study found that the field of orthodontics accounted for the second most common use of 3D printers in dental settings. (Image: Kristina Kokhanova/Shutterstock)

Global player Straumann Group’s orthodontic portfolio features both direct-to-consumer (D2C) and business-to-business (B2B) clear aligner systems and no fixed appliances. Despite this, orthodontics was the fastest-growing business segment at Straumann in the fourth quarter, and it was helped along by the new clear aligner material ClearQuartz and the updated software ClearPilot 2.0.

Responding to a question during a call with analysts in February, CEO Guillaume Daniellot said he did not see a lack of fixed orthodontic appliances in the portfolio as a disadvantage; he pointed to the example of Align, which does not sell these either and yet is the market leader in the general dentist and specialist segments. “It’s more about investing significantly in our capacity on the software capability of clinicians,” he said.

Daniellot explained that Straumann had “significantly invested in new software development in 2020 where new features are now available in order to increase treatment capabilities. On top of that, our scanners now integrate with our orthodontic software, driving convenience and efficiency at the clinician side”. The adoption of intra-oral scanners into digital orthodontic workflows among Straumann customers had been rapid, and close to 90% of all clear aligner case starts are submitted digitally by clinicians, he added.

Straumann’s clear aligner solutions showed high double-digit growth through last year, and Chief Financial Officer Dr Peter Hackel added that dentist-led D2C sales had been higher than those from the B2B segment. Straumann sells the DrSmile and Smile systems directly to consumers (Smile to those in Latin America) and the ClearCorrect brand directly to dentists.

US-based company Dentsply Sirona has been one of the most outspoken among major dental companies on the topic of digitisation in dentistry. Like Straumann, the company offers D2C and B2B clear aligner systems, and it said in February that aligner sales had boosted its fourth-quarter result, together with sales of dental implants and CAD/CAM technologies. Organic sales from those three product segments experienced double-digit growth in the quarter, and this in turn increased sales of the company’s technology and equipment.

“In three years, we scaled our clear aligners from having no presence in this space to a business that generated US$274 million in 2021,” Chief Financial Officer Jorge Gomez said. SureSmile, the company’s B2B brand, grew by 60% during the year and eclipsed US$100 million in annual sales, and its D2C brand, Byte, struggled, owing to high competition and COVID-19-related changes in consumer spending.

Speaking about the benefits from the company’s considerable investment in equipment and integrated digital workflows, CEO Donald Casey said: “These diagnostic capabilities feed into our outstanding treatment planning offerings in four of the essential dental workflows. Those areas include implants, clear aligners, restorations and endodontics.” He added that “dentists [were] looking to add more sophisticated diagnostic tools that will allow them to incorporate more complex procedures like implants and clear aligners to the practices”.

Casey said: “Clear aligners are an essential part of our digital strategy and increase our exposure to one of the fastest-growing areas in dentistry.” 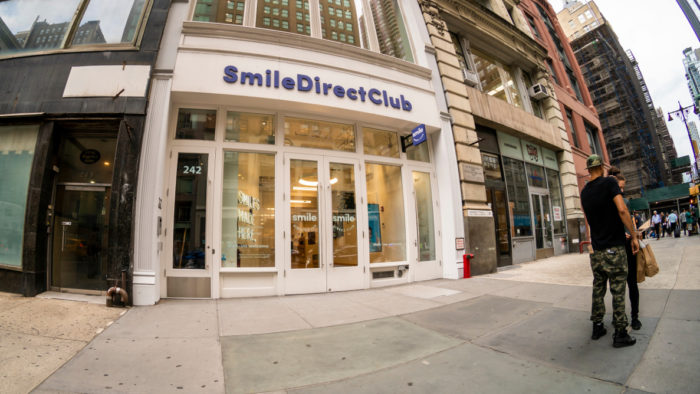 Leading provider of D2C clear aligners SmileDirectClub (SDC) struggled in 2021, but managed to finish the year with revenues that were down just 2.9% compared with 2020. The company appeared to have missed out on the economic immunity to COVID-19 that seemed to have been afforded to other clear aligner manufacturers, owing to the financial effects of the pandemic on its target demographic.

“The increased cost of non-discretionary goods and services is likely limiting the ability to spend on discretionary goods and services,” CEO David Katzman said in December, noting that inflation had accelerated during the second quarter of 2021 and was having a higher relative impact on those with lower incomes. The macroeconomic headwinds caused the company to “move upstream” to attract customers from higher income brackets. By default, this meant that SDC is now challenging market leader Invisalign in what Katzman said was a natural progression—“going from a disruptor to a challenger”—actively competing against Align and increasingly selling aligners directly to dentists.

In a phone call with analysts in March, Katzman said that, the company was continuing to invest in technology that supported its remote service, including its new SmileOS artificial intelligence-driven treatment planning software. He said that the software delivers better treatment outcomes, predicts tooth movement with greater accuracy and would “help our network of doctors treat a broader range of patients”.

In February, SDC announced a new partnership with Carestream Dental which will see the latter’s intra-oral scanners used in SDC’s flagship SmileShops and partner network locations.

When it comes to the benefits of offering clear aligner therapy in dental clinics, SDC’s chief clinical officer, Dr Jeffrey Sulitzer, says that dentists are not known to overlook a strong sales proposition. Speaking to Bloomberg about the company’s B2B offering, which it rolled out shortly before the COVID-19 pandemic, Dr Sulitzer stated that “orthodontists and dentists do what is in the best interests of their practices. When there is a good business opportunity, they will take advantage of it”.

BONN, Germany: A study led by researchers at the University Hospital Bonn has found that 4D-printed orthodontic clear aligners can apply biocompatible ...

BREA, Calif., US: Carestream Dental will sell its intra-oral scanner business to Envista Holdings in a deal that will cost the latter US$600 million ...

SYDNEY, Australia: An increasing number of Australians are wanting to repair malocclusion, and the demand for less intrusive and more cost-effective options...

CUPERTINO, Calif., U.S.: In the past, key steps in maintaining one’s privacy might have entailed drawing the curtains after dark, planting a hedge or ...

NASHVILLE, Tenn., U.S.: SmileDirectClub (SDC) is a leading provider of remote clear aligner therapy, but the company has missed out on the economic immunity...

DUBAI, UAE/SYDNEY, Australia: One of the most notable trends in dentistry in 2021 has been the continued rise in popularity of remotely monitored ...