BERLIN, Germany: The orthodontics start-up PlusDental is now offering clear aligner treatment at dental practices in Sweden. According to the company, its new Swedish operations will initially include working with 30 partner clinics, opening pop-up stores across major cities and establishing new regional headquarters.

PlusDental has already invested around €5 million in its Scandinavian business and now plans to open offices in Stockholm in the second quarter of this year. PlusDental will employ around 50 staff in the Swedish capital. According to a press release announcing its northward expansion, the constitutional monarchy is a good fit for the company’s digitally based clear aligner treatment model.

“Sweden is the home of innovation. The Swedish people know the advantages of digital medicine, which is evidenced by the popularity of medical consultation apps such as Kry,” PlusDental said. Headquartered in Stockholm, Kry connects smartphone and tablet users with qualified healthcare professionals and has provided more than 500,000 patients with access to tele-healthcare. “The increase in awareness of dental health and the digitisation of medical procedures have led [us] to focus not only on Sweden, but also its Scandinavian neighbours,” PlusDental explained. 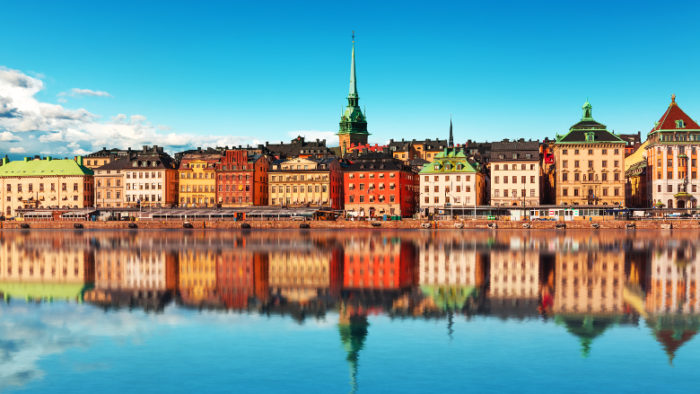 PlusDental plans to employ around 50 staff at a new regional headquarters in Stockholm. (Image: Oleksiy Mark/Shutterstock)

PlusDental faces stiff competition from both international and local clear aligner providers, but remains confident in its dentist-led digital treatment model. Patients receive a 3D intra-oral scan at partner dental practices, and PlusDental’s team of orthodontists, dentists and dental technicians then manufactures clear aligner trays at its laboratory and manufacturing facility in Germany. “Every treatment step—from the appointment to the creation of the aligners—is fully digitalised,” the company stated.

“Our goal is to continue scaling quickly”
– Eva-Maria Meijnen, PlusDental

Around 30,000 patients have completed treatment for malocclusion using PlusDental clear aligners in Germany, Austria, the UK, Spain, France, Sweden and the Netherlands. “Our goal is to continue scaling quickly in what is one of the largest markets for aligner treatments, cementing our position as European market leaders in the process,” commented PlusDental Chief Operating Officer Eva-Maria Meijnen. “We will expand to four more European countries in 2021 and by the end of the year, we will be able to offer PlusDental aligners to more than 70% of the European population,” she added.

Founded in 2017, PlusDental has around 200 partner clinics in Europe. The company changed its name and tweaked its business model in 2019, moving from mainly providing remote treatment to cooperating closely with established orthodontic practices. Last June, it secured around €32 million in a funding round that was led by the Chinese financial services group Ping An Insurance.

GOTHENBURG, Sweden: Large cranial reconstructions are being increasingly performed worldwide, but remain a substantial clinical challenge. Researchers from Sahlgrenska Academy at the University of Gothenburg, in cooperation with Karolinska Institutet in Stockholm and Uppsala University, have now developed a novel bioceramic implant. Study results show that it has been proved to stimulate regeneration of natural skull bone so that even large cranial defects can be repaired in a way which was previously not possible.

LONDON, UK: Though it is quite evident that dentistry, as a whole, has been greatly affected by the ongoing COVID-19 pandemic, the specific ways in which this impact has been felt are yet to be fully understood. A recent study from the UK has shown that many of the nation’s periodontists believe that they received insufficient support from the government and the General Dental Council (GDC) while lockdown restrictions were in place from March to mid-June.

WASHINGTON, U.S.: The SARS-CoV-2 pandemic is still ongoing, and countless stakeholders in the dental industry are feeling its effects. In an attempt to return to some sort of normality, the Centers for Disease Control and Prevention (CDC) has released updated guidance regarding dental services in the U.S. The advice is intended to expand the provision of nonemergency treatment while minimizing infection risks for patients and health care personnel alike.

NEW YORK, U.S.: Dentistry faces an earnest struggle to adapt to what some have called the new reality. A series of investor updates from major dental companies shows us that digital tools are now more important than ever for education and in customer service environments. Some dental companies have taken extraordinary measures to sure up manufacturing and supply, and significant adverse financial impacts have been shouldered.