Home / Marketplace / Straumann/ News
The global market for implant dentistry contracted by as much as 15% last year, but Straumann says that demand has returned in the premium and value segments. (Image: Straumann Group)
www.straumann.com
info@straumann.com
share
save

BASEL, Switzerland: The COVID-19 pandemic has now spanned 15 months, meaning that the latest quarterly results posted by dental companies are no longer being compared with pre-pandemic figures. Despite this lower benchmark, the performance of the Straumann Group in the first quarter of 2021 was impressive—sales spiked by 72% in the Asia Pacific (AP) region, by 32% in the Europe, Middle East and Africa (EMEA) region, and by 19% in North America.

The Straumann Group operates in almost all dental markets and its CEO Guillaume Daniellot told analysts in April that he expects that the company’s future growth will centre around orthodontic care and dental implants. “As you know, the global market for clear aligners is one of the most attractive areas in dentistry. And we expect growth in orthodontics and implant dentistry to outpace the general dental market,” he stated during a conference call.

Orthodontic sales have already boosted regional results for Straumann this year, and Daniellot expects high interest in the company’s recently launched ClearQuartz—a clear aligner material for its direct-to-clinicians ClearCorrect system. Straumann recently acquired the direct-to-consumer clear aligner system DrSmile, which achieved its 200th partner dental clinic during the quarter. Dental clinics that are offering treatment with DrSmile clear aligners are mainly located in Austria, Germany and Spain, and expansion of the brand is currently underway in France and Italy and planned for Poland and Sweden later this year.

As part of a new agreement, Straumann’s Neodent brand dental implants, abutments and crowns are now being offered in all 333 dental offices that are affiliated with the US group Western Dental. Under the terms of the partnership, Straumann will supply the dental support organisation with Neodent products, clinical training, patient education information and marketing support. Western Dental Chief Dental Officer Dr John Luther commented that demand for implant treatment was growing. “Dental implants are an increasingly important component of high-quality dentistry,” Luther said in a note to the press.

Dr Peter Hackel, Straumann’s chief financial officer, told analysts that the company’s orthodontics business had posted strong growth during the quarter. When it comes to dental implants—which account for the lion’s share of the company’s portfolio—Hackel said that the apically tapered BLT and the fully tapered BLX made the greatest contribution to first quarter sales.

“The group’s challenger implant brands, Neodent, Anthogyr and Medentika, grew strongly and helped to gain share in countries including Brazil, China, France and the US,” Hackel noted. 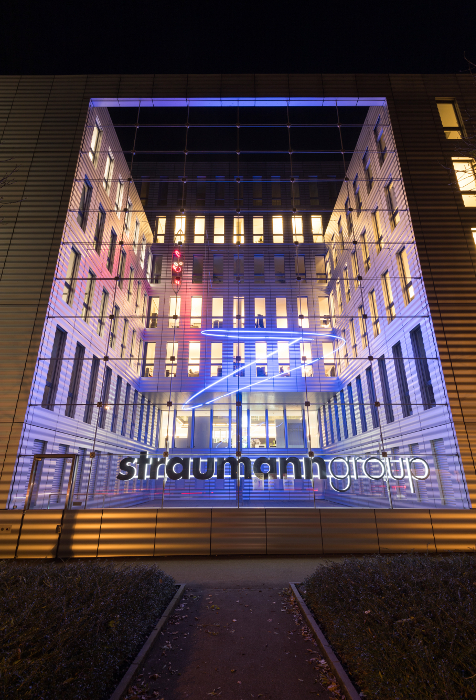 In a conference call with analysts, Daniellot called the result “very strong” and pointed out that two-thirds of total sales growth during the quarter had come from the EMEA and AP regions.

The EMEA region accounts for nearly half (45.6%) of Straumann’s global business, and EMEA sales in the quarter increased by 32.1% to reach CHF 214.3 million. Straumann said in its results that country markets Germany, France and Italy had performed well and that its EMEA orthodontics business had grown considerably.

Straumann had warned of a massive drop in sales in Asia during the first quarter of 2020, even before the World Health Organization declared a pandemic. The company’s sales in the region fell by 25.5% between January and March last year but have since rebounded strongly. The CHF 92.3 million in sales posted for the first quarter of 2021 represents a year-over-year increase of 72.4%.

The only region for which Straumann did not post sales gains in Swiss francs was Latin America, where currency headwinds dampened what was essentially a strong result. The depreciation of the Brazilian real and Argentinian peso meant that first quarter sales of CHF 25.2 million in the region represented a dip of 3.1% compared with sales of CHF 26.0 million in the first quarter of 2020. However, organic sales growth for the region (which excludes the impact of exchange rates and acquisitions) increased by 23.8% during the quarter, showing that dental markets in Latin America are back on track for the company.

Daniellot said that Straumann had bounced back strongly in Latin America despite the lingering challenges. “Dental practices were open and undertaking treatment, also the region is still heavily impacted by the pandemic,” he explained. “Argentina and Chile were the strongest growth contributors, while the group achieved double-digit growth in the region’s largest market, Brazil,” Daniellot commented.

In his closing remarks to analysts, Daniellot said that dental practices around the world had remained open during the quarter and that all dental treatments had been possible in most places. “The group observed consumer demand focusing on specialty dental treatments and experienced a temporary tailwind from the pandemic as consumers prioritised spending on oral health. With mass vaccination underway and other spending options becoming available again, we expect this tailwind to soften in the second half of the year,” he commented.