The number of universal adhesives being offered by the dental industry nowadays can make it difficult to decide whether it may be worth switching to another product in your practice. For every single case you work on, you have to make a number of choices over and over again. To make wise and deliberate decisions, we need to have a thorough understanding of what we are doing. This also includes knowledge about the products that we are using, how they function and why we are using them. Applying a technique without thinking and without knowing why cannot guide you to excellence.

In the following clinical case, I will try to outline the reasons that convinced me to switch to G2-BOND Universal (GC).

A 50-year-old patient who had had many dental treatments in the past was seeking retreatment. She complained about occlusion-related problems in the posterior third quadrant, which had been edentulous for a long time already. Implants had been placed in loci #36 and 37, but the implants were never restored, resulting in an egression of the molars in the second quadrant. Tooth #27 had a provisional restoration that had been in place for one year, according to the patient (Fig. 1).

A dental dam was placed, and after careful curettage, pulp exposure could not be avoided (Fig. 2). As the bleeding was abundant and haemostasis was not obtained after several minutes, it was decided to perform endodontic treatment in that session (Fig. 3). Because the caries extended very deeply at the mesial side, a deep marginal elevation using EQUIA Forte (GC)1–4 was carried out before the endodontic treatment (Fig. 4). 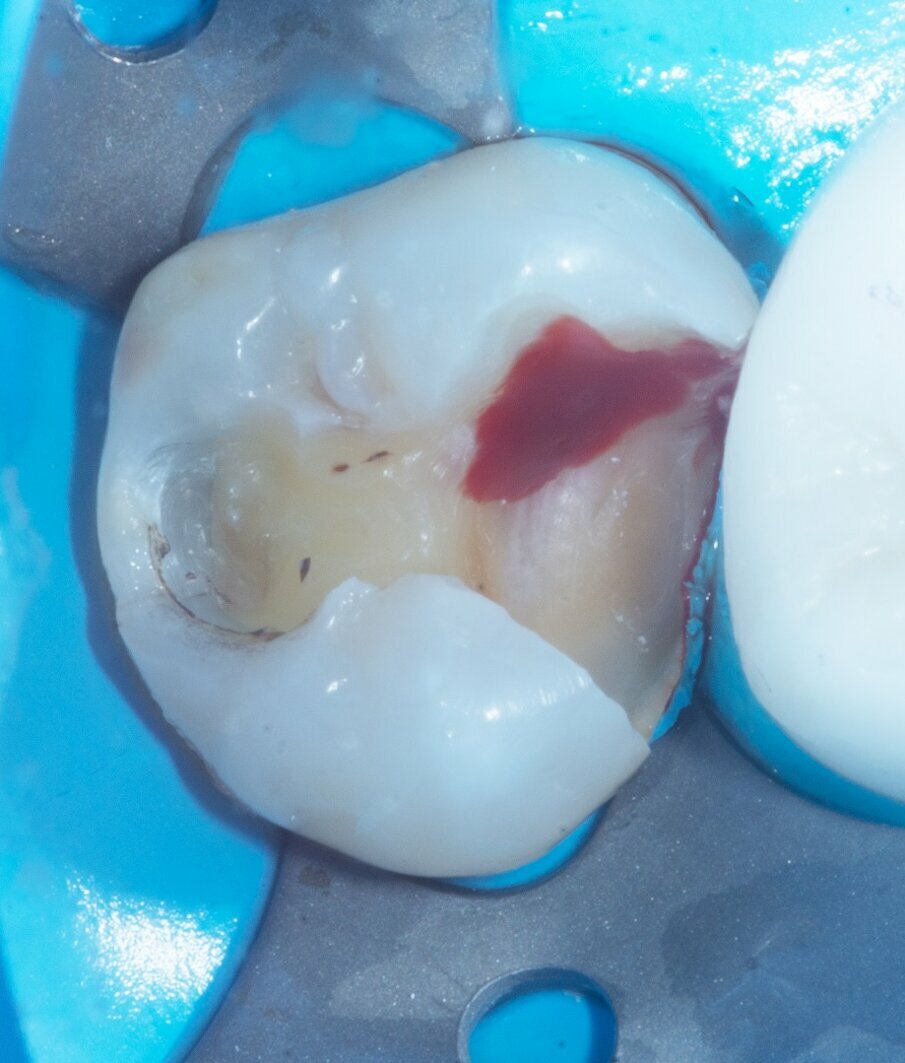 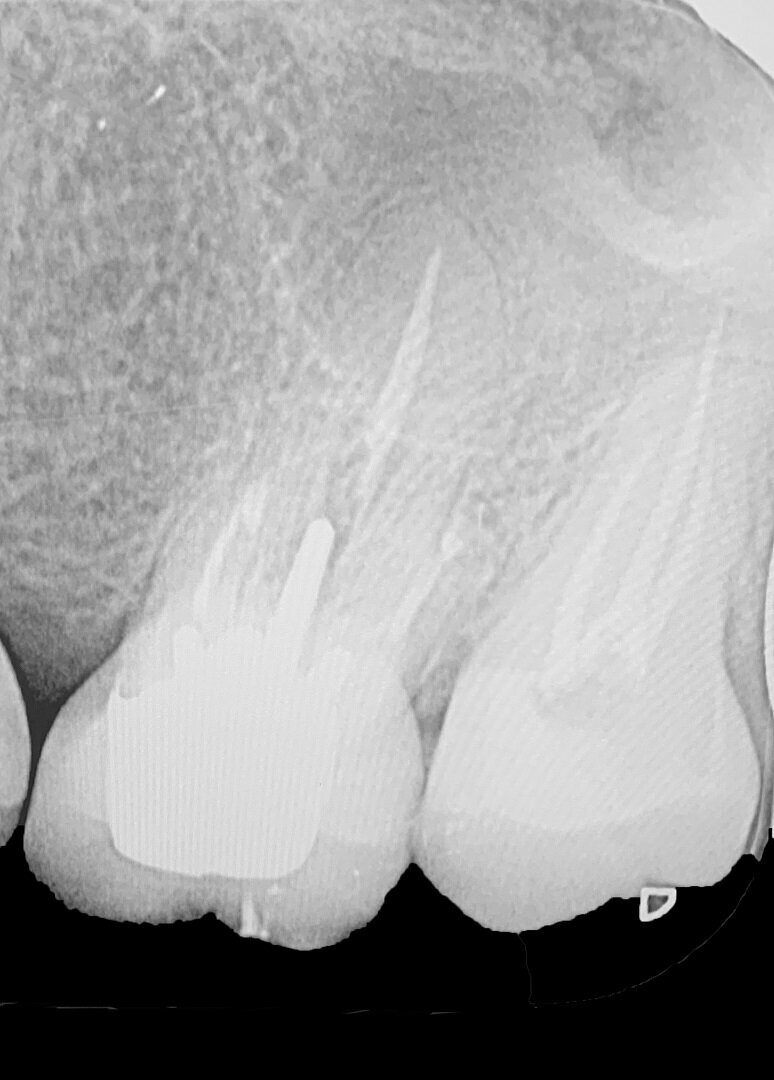 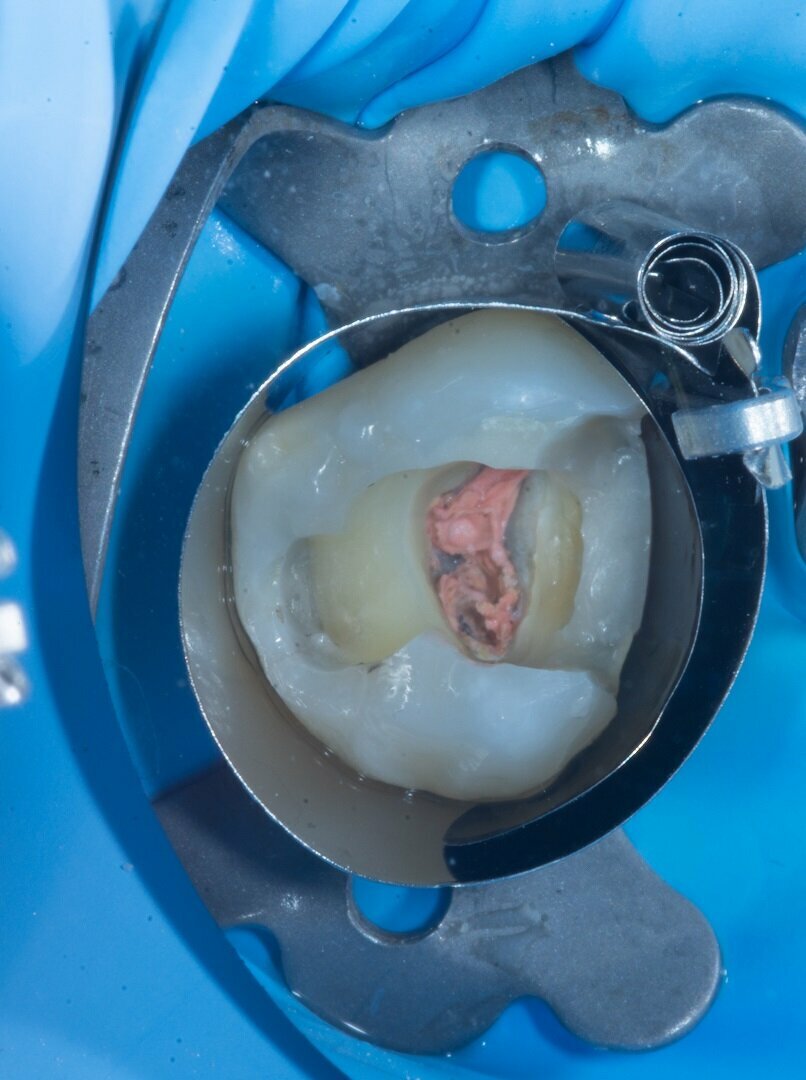 After wax-up, a provisional bridge was placed on implants #36 and 37 to restore an ideal occlusion curve. After treatment of tooth #27, the marginal elevation was perfectly sealed, but the mesial emergence profile was a bit flat. It was decided to modify this emergence profile using a double-matrix system during the final reconstruction of the tooth.

Upon isolation of the field, four teeth were systematically exposed through the dental dam for a wide and open operatory field. A provisional restoration on tooth #26 was removed before the preparation to improve visual access. It would be replaced before the impression taking, and of course, the contact point would be adjusted.

As the sealing of the initial deep margin elevation was perfect, it was decided not to remove the EQUIA Forte entirely and to adhere the restoration on top.5 EQUIA Forte’s compressive strength allows this option.6

Using the etch and rinse technique, the entire surface was etched with phosphoric acid for 15 seconds. Afterwards, a layer of G2-BOND Universal 1-PRIMER was applied, and after 10 seconds, it was carefully dried with maximum air pressure to remove the residual water from this hydrophilic layer. Thereafter, G2-BOND Universal 2-BOND was applied and gently spread with air to leave a sufficiently thick hydrophobic layer and photopolymerised.

The mesial wall of the restoration was built up with a composite (Essentia, Light Enamel shade, GC). Prior to its application, G-ænial Universal Injectable (GC) was placed on the bottom of the mesial cavity to ensure the marginal seal.

The core of the restoration was reinforced with everX Flow7 (GC), which needs to be covered with composite. Therefore, it is wise to do the necessary occlusal reduction before starting the reconstruction of the core (Figs. 5 & 6). 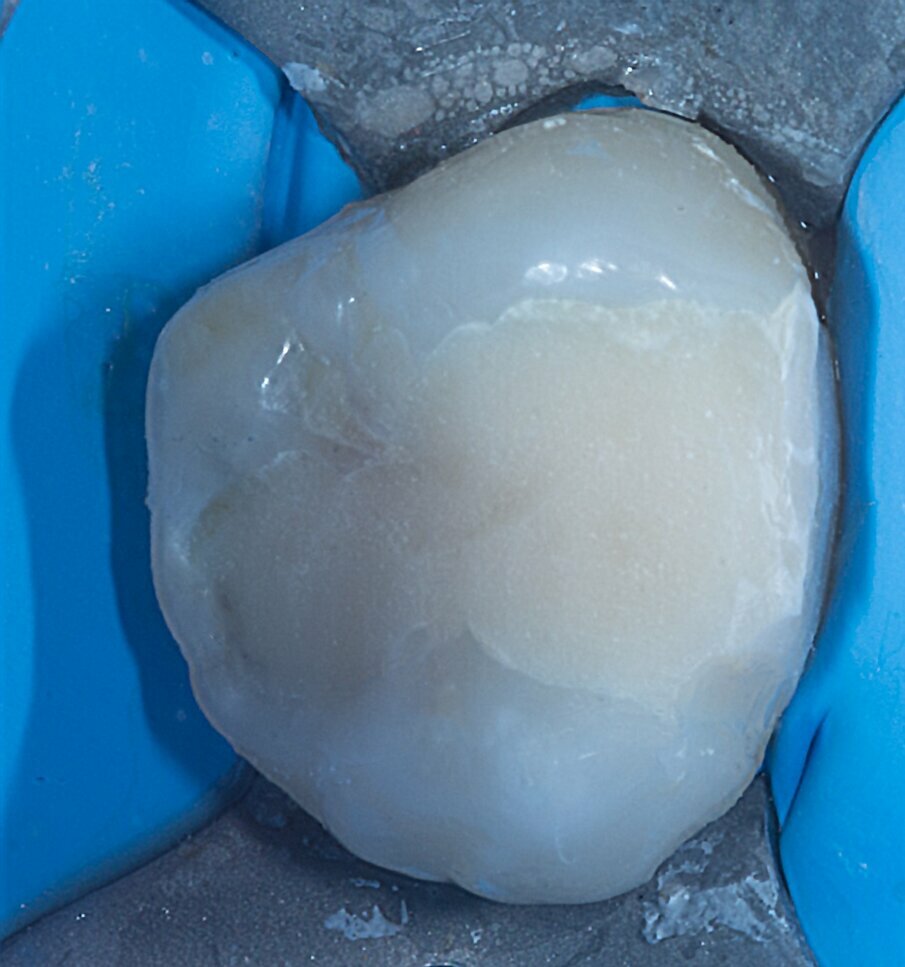 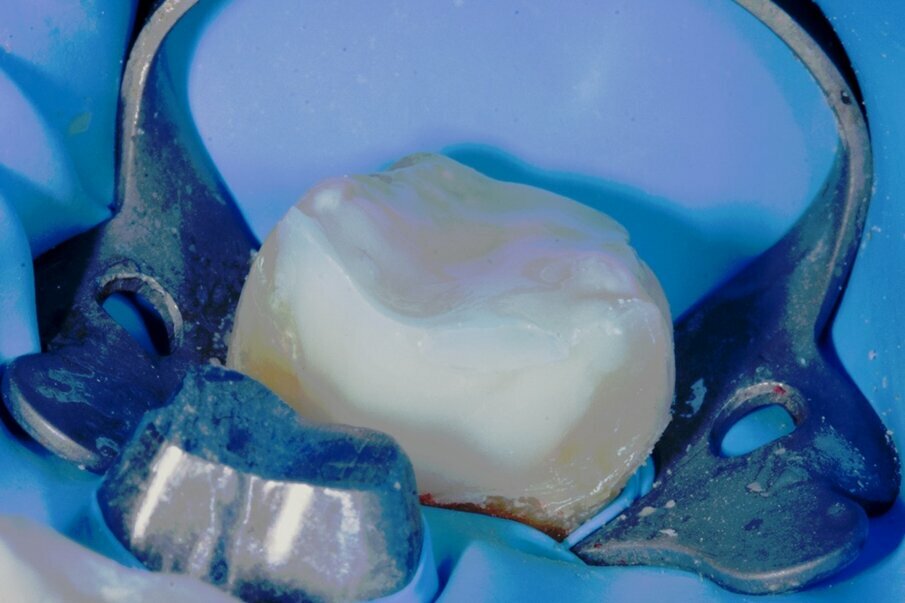 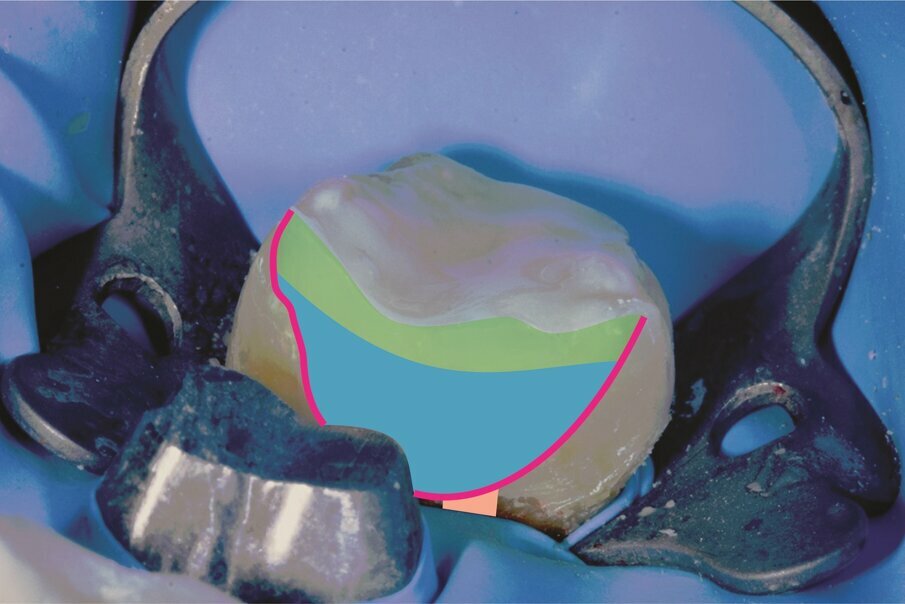 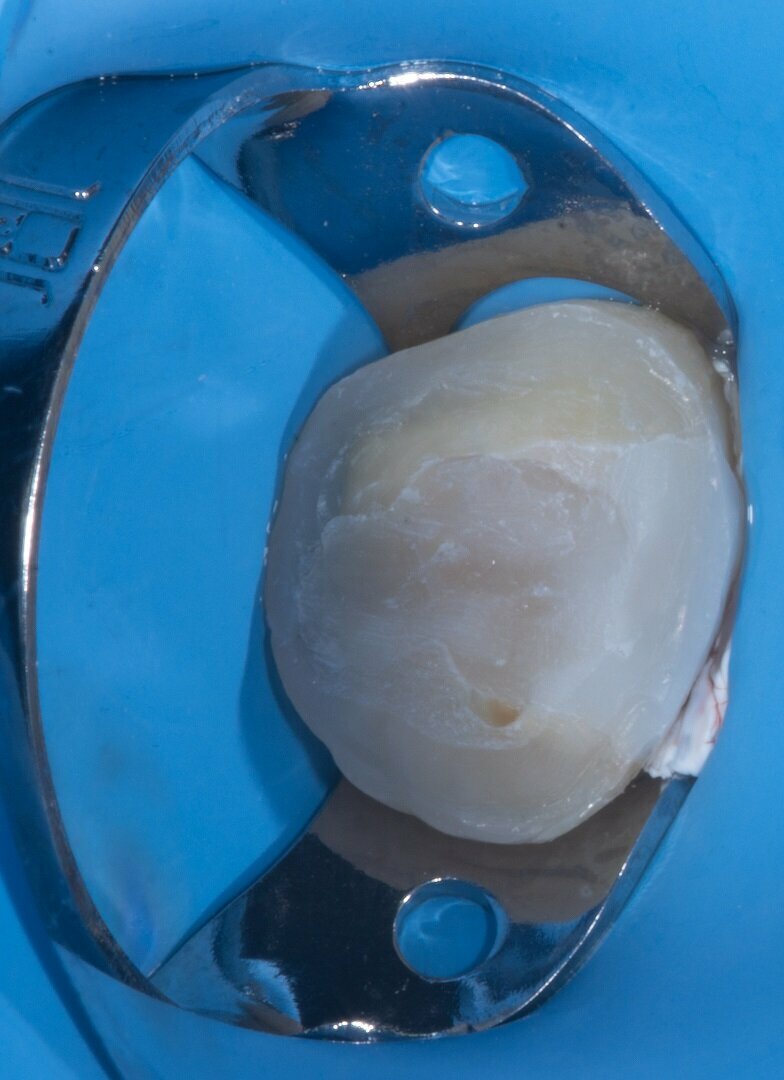 It was decided to make a partial restoration that would cover the tooth completely because of the cavity width and to correct the egression and to increase the tooth’s mechanical resistance, being an antagonist to an implant restoration. The preparation of the tooth would be flat and non-retentive, requiring adhesive cementation.8 The restoration margins were completely in enamel with the exception of the elevated mesial margin. This approach avoids overly extensive mutilation and allows for preservation of a large part of the tooth (tissue economy). However, it is often assumed that a devitalised tooth is more fragile than a vital tooth. The decrease in flexural resistance is only 6% compared with a vital tooth. The main reason for the weakening is dental tissue loss.9, 10

After finishing of the preparation (Fig. 7), the margin was smoothed with a fine bur (red stripe); white Arkansas stones can also be used. A digital impression was taken and sent to the prosthetic laboratory. A bis-GMA provisional restoration was created after an impression of the prosthetic project. It was not bonded but just stabilised with two dots of flowable composite on the palatal and vestibular enamel.

In the next session, the lithium disilicate overlay (GC Initial LiSi Press; Fig. 8) was tried in to check the fit and approximal and occlusal contacts. Before cementation, a dental dam was placed with a clamp on tooth #27 and four other teeth were exposed to create a wide operatory field. Liquid dam was used around the coronal preparation to have perfect isolation. The provisional restoration on tooth #26 was removed prior to the cementation to have direct access to the proximal margin, and the preparation was air polished with a calcium sodium phosphosilicate powder (AquaCare Sylc, Velopex) to clean the surface (Fig. 9). The preparation was rinsed and dried thoroughly, leaving no trace of moisture.

Prior to bonding, the overlay was ultrasonically cleaned and dried. The inside of the restoration was checked to ensure that no stains had been left on the edges of the intaglio surface. These should be removed by sandblasting with 50 µm alumina to avoid impaired adhesion to the tooth. 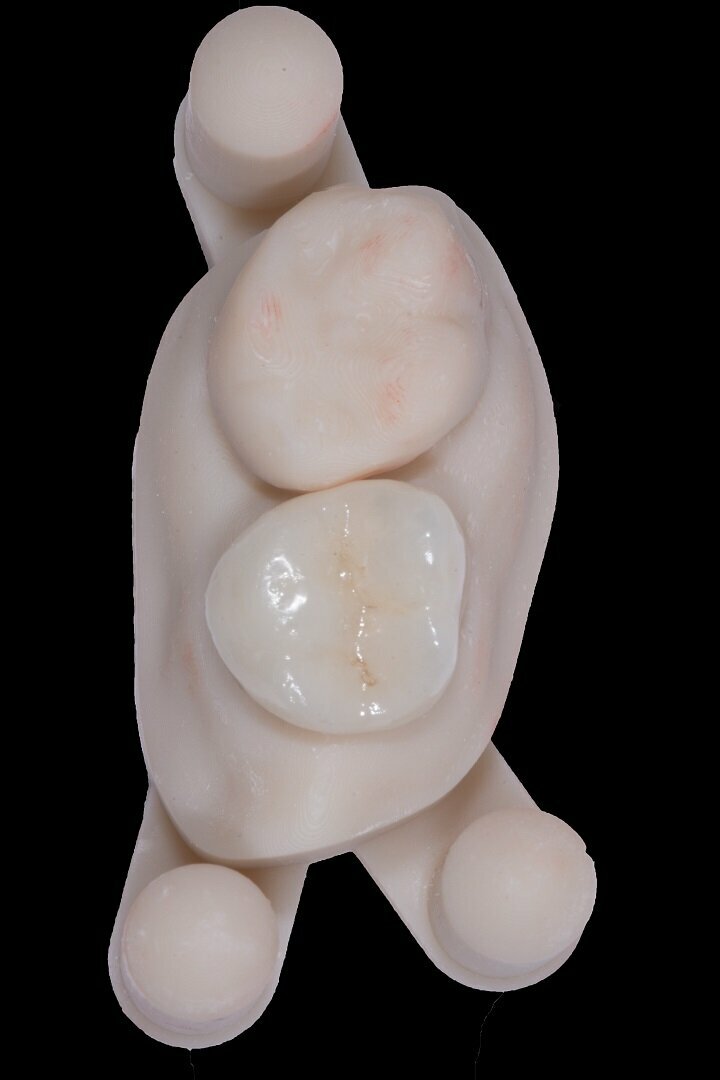 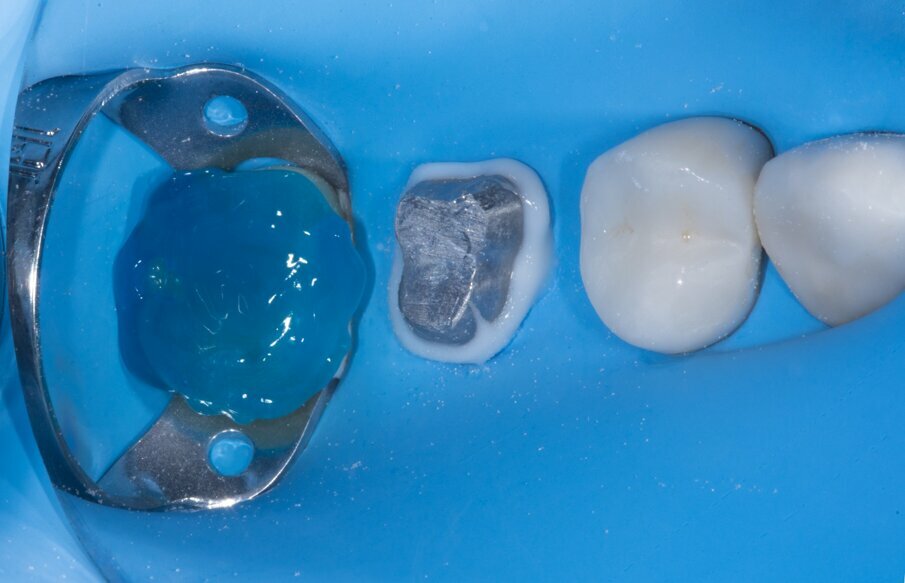 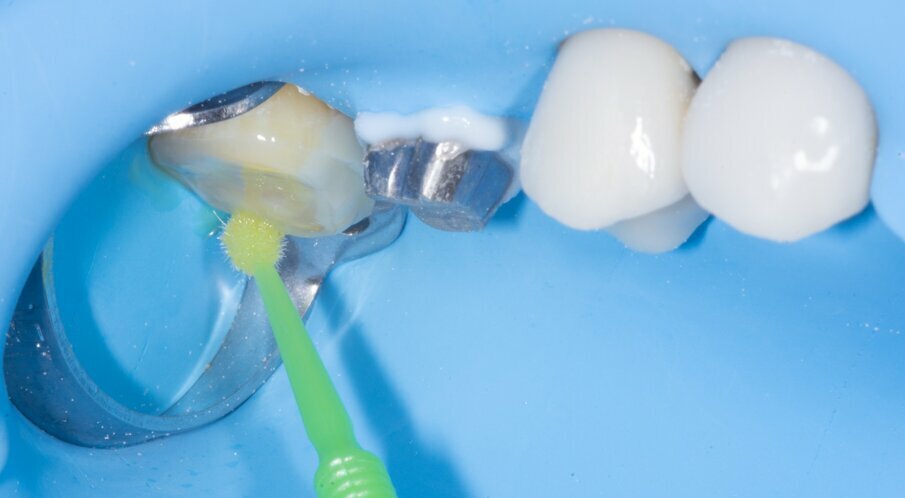 As the next step, the intaglio surface was etched with hydrofluoric acid for 20 seconds. Any traces of metallic salts were removed by applying phosphoric acid for 2 minutes and 30 seconds.11, 12 The silane-containing G-Multi PRIMER (GC) was applied without rubbing, spreading it out gently with a brush and left on for 1 minute. Some advice at this stage is to heat the silane with a hairdryer.12 The restoration was then ready for adhesive cementation.

The prepared surface of the devitalised tooth was etched for 30 seconds (Fig. 10) and then thoroughly rinsed and dried. Next, G2-BOND Universal was applied in the same manner as described previously (Figs. 11 & 12).

One of the benefits of this universal adhesive is the effective bridging of the transition from the hydrophilic dentine to the hydrophobic resin. Because 1-PRIMER is HEMA-free, the water can be removed from the interface more efficiently. Another advantage of the primer is that it contains a photoinitiator, which ensures that the deeper layers of the interface are polymerised more efficiently. In addition, 2-BOND is free of HEMA and MDP; it has a solvent-poor composition. This bonding is inherently hydrophobic. The polymerised adhesive (primer and bond) is hydrophobic by nature. Therefore, the occurrence of hydrolysis decreases over time, which is the greatest concern in adhesive dentistry with regard to the sustainability of the adhesive layer.

The fact that this adhesive is applied in two steps is beneficial for its stability and efficiency. Universal bonding systems are often blended in a single solution, which can lead to a reduction of the stability of the components over time.13

After application of both layers, the adhesive was photopolymerised (D-Light Pro, GC). It should be emphasised that the performance of the curing light should be tested regularly in the dental office. If the light intensity is too low, the adhesive might not be entirely polymerised and the bond strength can be impaired. Therefore, it is useful to have a testing device in your practice to check your light regularly.14

In this case, G-ænial Universal Injectable was used for luting. It was applied to the intaglio surface of the restoration and a little to the preparation itself (Fig. 13). The seating of an overlay that does not perfectly fit on this type of flat, non-retentive preparation can be delicate, as it tends to slip off (Fig. 14). Excess composite was removed with a probe, a micro-brush and a flat brush to finish (Fig. 15). In general, it is better to leave too much luting agent than to remove too much. The margin was photopolymerised for 1 minute from each side. Before the final polymerisation, glycerine gel was applied (Fig. 16) to avoid the formation of an oxygen inhibition layer (and consequent discoloration). The margin was then further finished using a size 4 spoon blade (Viper, MJK Instruments; Fig. 17) and polishing tips.

Fig. 13: G-ænial Universal Injectable was applied to the inner surface of the restoration and to the preparation.
Fig. 14: Seating of the lithium disilicate (GC Initial LiSi Press) restoration.
Fig. 15: Removal of excess composite.
Fig. 16: Final polymerisation under glycerine gel.
Fig. 17: Finishing of the margins using a size 4 spoon blade.
Fig. 18: Radiograph after cementation of the onlay, showing good marginal adaptation and absence of cement excess.
Fig. 19: Clinical result after cementation. 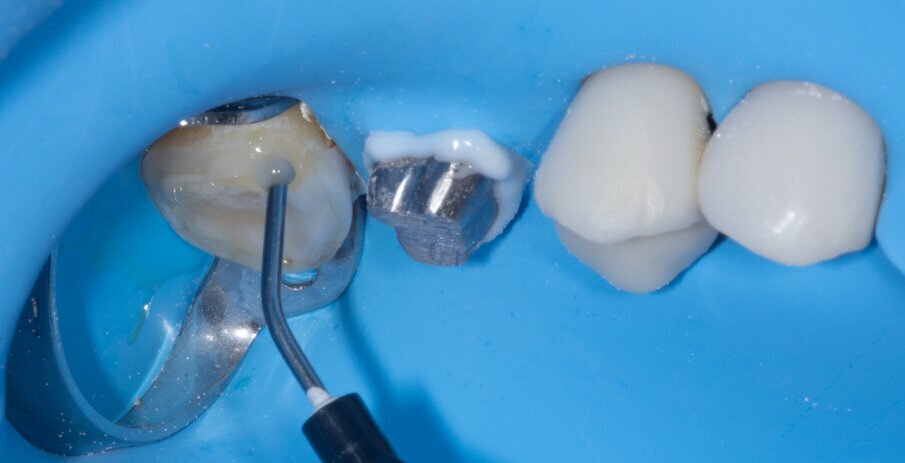 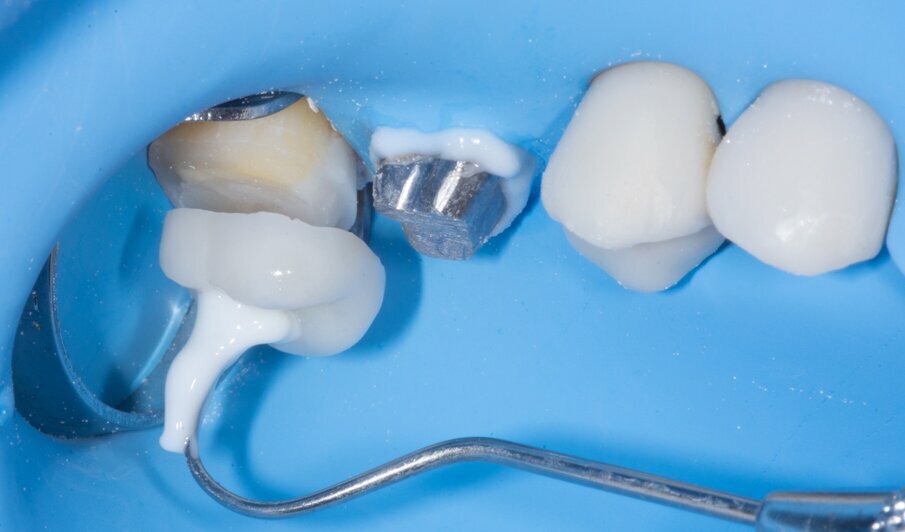 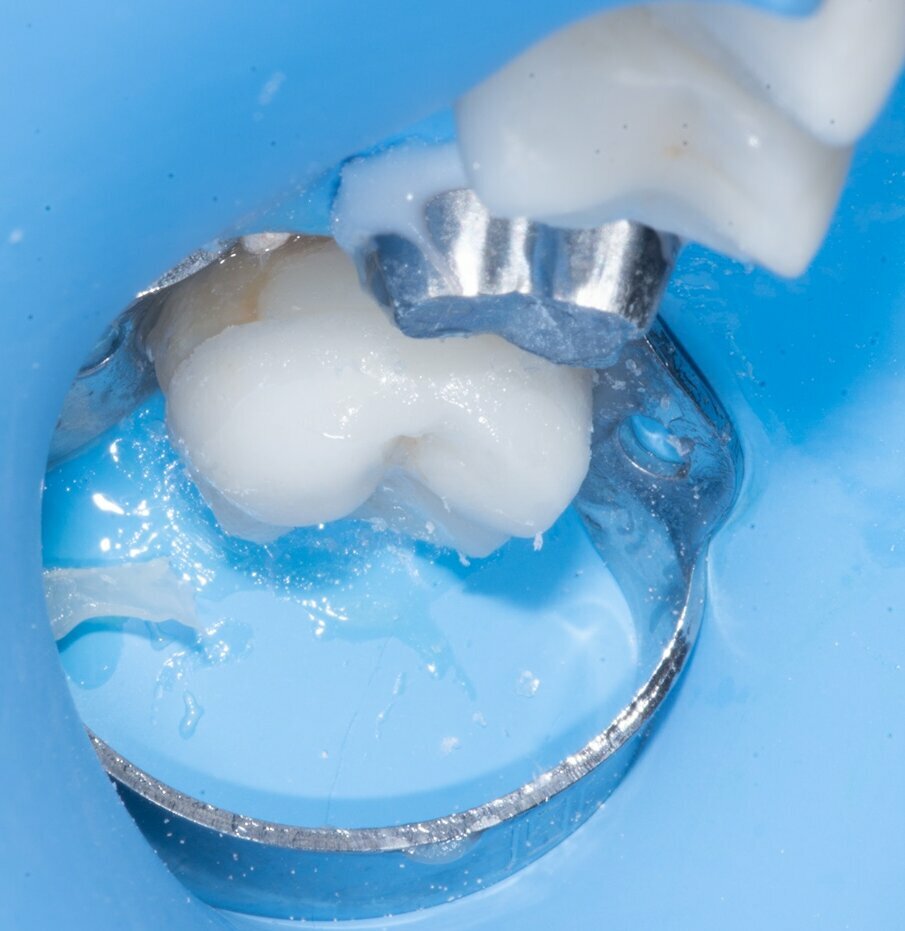 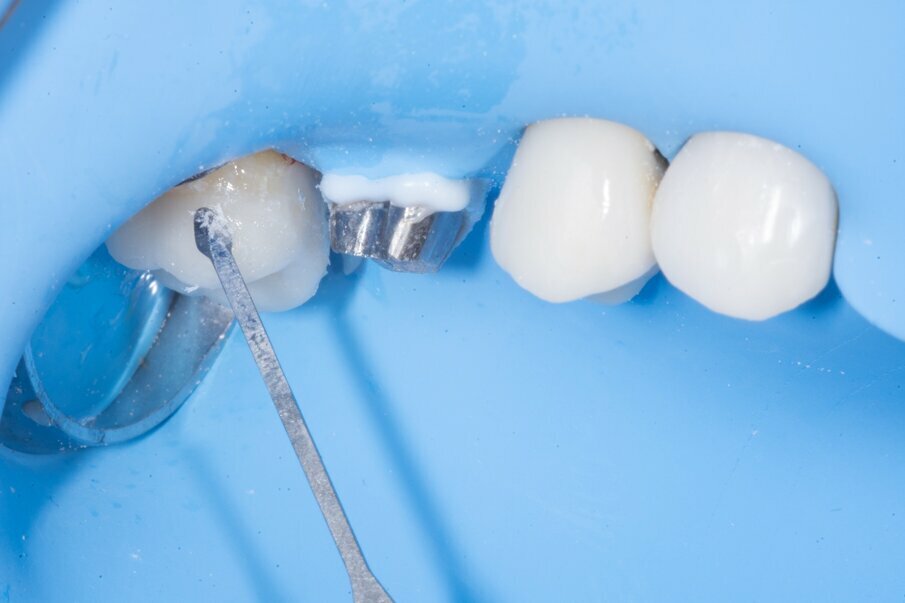 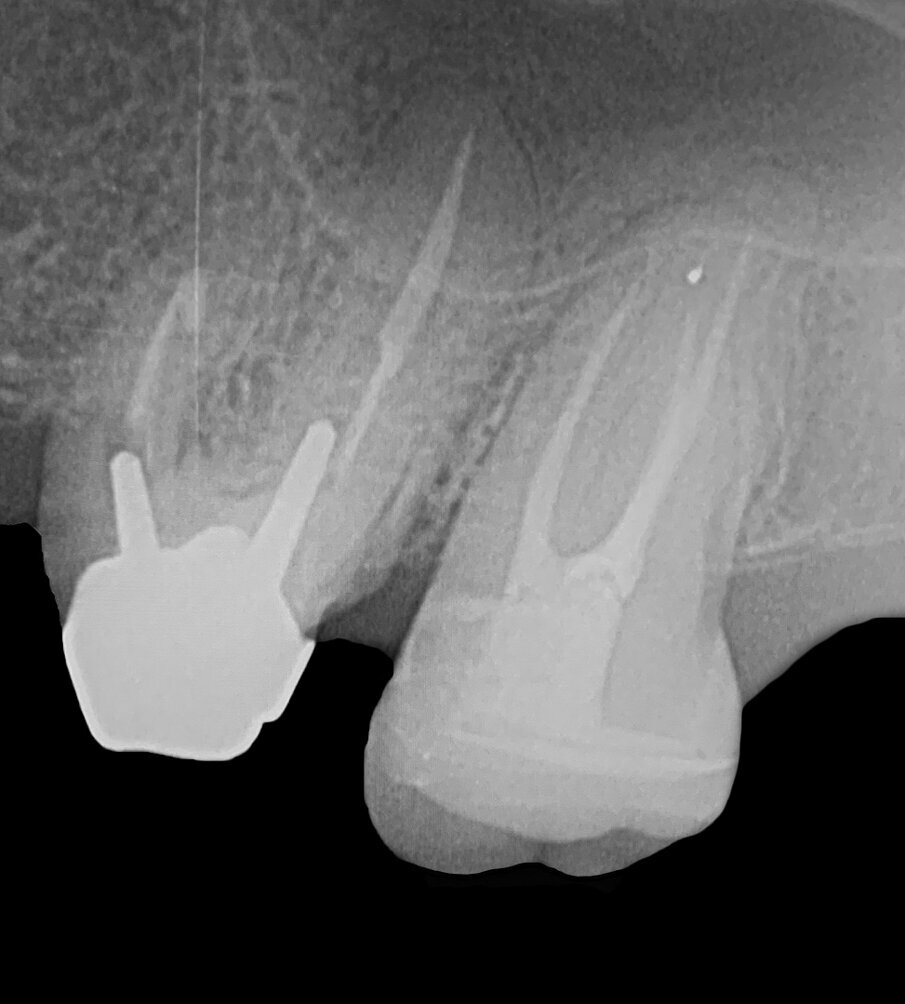 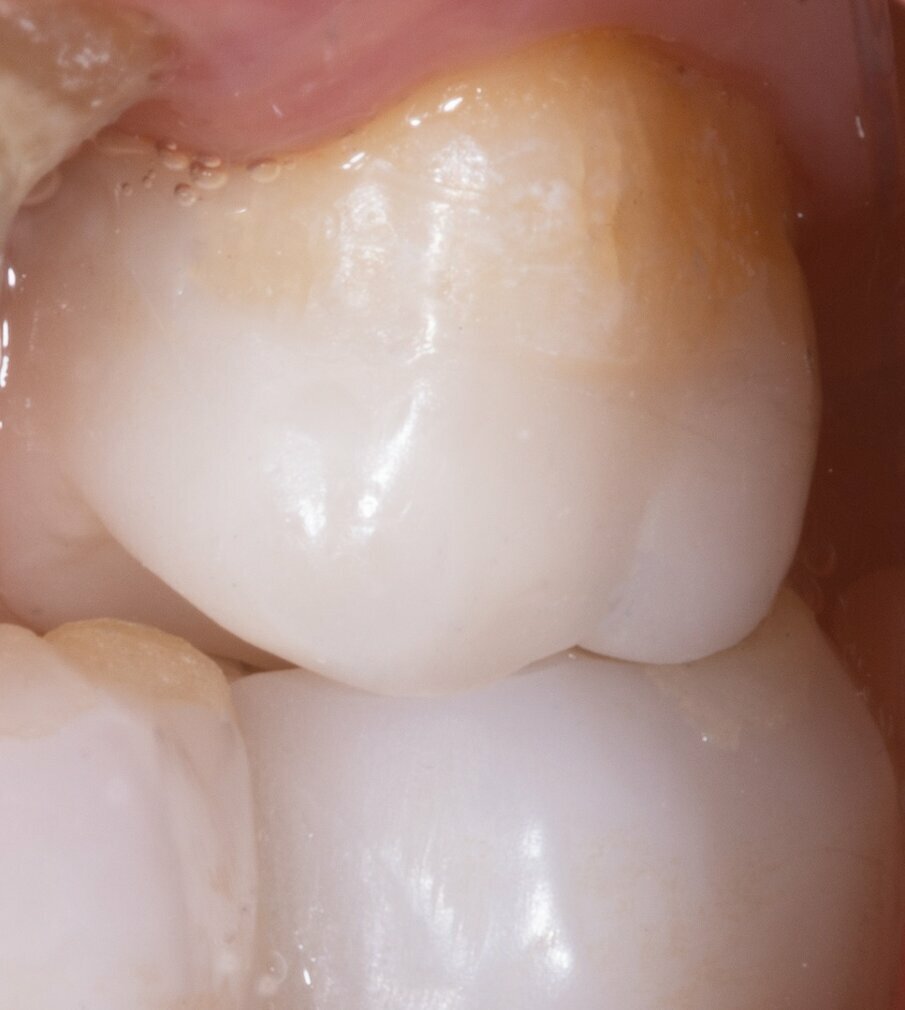 Usually, a radiograph should be taken to verify that no cement excess has been left interproximally (Fig. 18). Should excess be found, it should preferably be removed with a metal strip that has a smooth part and that can be easily inserted at the contact point. The cemented overlay fitted seamlessly on to the tooth without debris at the margins (Fig. 19).

After having tested G2-BOND Universal in the clinical practice for one year, on vital and non-vital teeth, in a three-step approach as well as immediate dentine sealing, no detachments or postoperative sensitivity occurred. This adhesive has many promising features. The few studies that have already been conducted have showed impressive results, rivalling current gold standards.

The author would like to thank master dental technician Gilles Philip for his meticulous technical work and endodontist Dr Paul Marchal for performing the endodontic treatment.

A list of references can be obtained from the publisher.

The co-editor-in-chief of the Journal of Adhesive Dentistry and chair of the Department of Oral Health Sciences at KU Leuven in Belgium, Prof. Bart Van ...

LUCERNE, Switzerland: G-CEM ONE is the newest self-adhesive resin cement from GC that simplifies procedures and brings together high bond strength, ...

The predictability of dental implant osseointegration has enabled clinicians and researchers to focus on additional success criteria in the overall ...

LEUVEN, Belgium: GC is committed to giving dental professionals easy access to educational resources. After a number of successful online symposia, the ...

Differences within material classes in CAD/CAM ceramics are not obvious at first glance. A knowledge of materials science is required in order to classify ...

FLORIANÓPOLIS, Brazil: Between 27 and 30 April, more than 1,200 dental professionals took part in the many engaging activities and learning opportunities ...

Through the Minamata Convention on Mercury in 2013, the countries of the EU committed themselves to completely or largely eliminating mercury-containing ...

Dealing with implant restoration is challenging, and this process would be impossible if we could not communicate freely between the clinic and laboratory. ...

COLOGNE, Germany: This morning, media representatives from around the world met at the Koelnmesse fairgrounds for the GC IDS press conference. The main ...

Adhesive Dentistry: The Daily Application of the Latest Research

Smile for the World Learn from Renowned Researchers Around the Globe

To inject or not to inject

SIENA, Italy: From 22 to 24 September, the annual European Prosthodontic Association (EPA) Conference took place in Siena under the presidency of Prof. ...